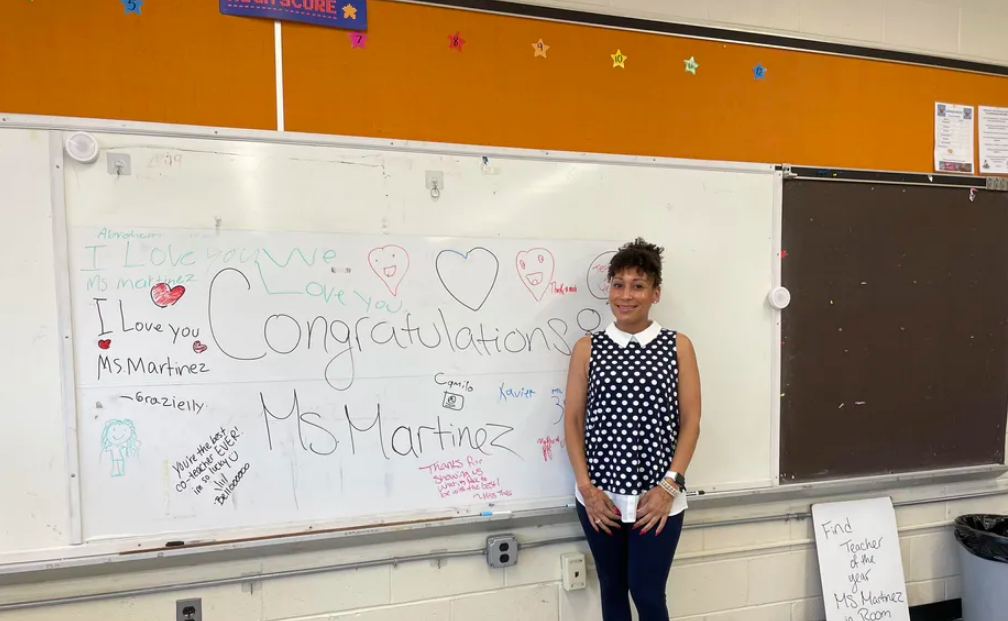 DeJanee Martinez has loved reading for as long as she can remember. And every school day, whether through a computer screen or in person, she tries to instill that love in her students at Bruce Street School for the Deaf.

The 110-year-old school on Clinton Place in Newark is one of the oldest day programs in the country for Deaf and hard of hearing students ages 3-15. Yet many Newarkers — and even teachers in the district — learned about it only in June, when Martinez was named Newark Public Schools’ Teacher of the Year.

“The award was definitely an eye-opener for so many people,” Martinez, who teaches third, fourth, and fifth graders in American Sign Language, or ASL.

About 58 students are enrolled in the school, which shares a building with the district’s George Washington Carver Elementary School and KIPP Seek Academy, a charter school. Students from Newark and surrounding communities who are Deaf or hard of hearing attend the school.

District schools, including Bruce Street School, began the academic year fully remote and transitioned to a hybrid of in person and online instruction in April.

There was no doubt that Martinez’s students were proud of their teacher’s accomplishment and recognition by the district. “We love you, Ms. Martinez,” was written three times on the whiteboard at the front of her classroom, alongside drawings of hearts and other congratulatory messages.

During a recent interview with Chalkbeat, Martinez spoke about the challenges of teaching Deaf students during the pandemic, what practices she hopes will continue in the fall, and how she reacted to the news that she had been named Teacher of the Year.

Why did you want to become a teacher of the Deaf?

I’ve wanted to teach since I was about 5 or 6. When I was in high school, my mother had a Deaf friend, and I just thought sign language was so beautiful. I love to dance and it reminded me of interpretive dancing.

Kean University had a teacher of the Deaf program that I enrolled in right after graduating Science High School in Newark. For student teaching, they placed me here at Bruce Street School, and I never looked back. This is where I wanted to stay. When I was growing up here, I never knew this school existed and I was amazed at what the teachers here do. I wanted to be part of it.

I have to say, no one else in my graduating class at Kean University wanted to work in Newark. But I was definitely passionate about coming back to the district that’s home to me. I understand the fear and stigmas and reputation of Newark, but I never had that feeling. This is home. There were no negatives I could think of at the time and, 16 years later, I still haven’t found a negative. This is a great school.

What were some challenges you faced teaching during the pandemic?

It was one of the hardest things I’ve ever had to do, mostly because a lot of the students don’t have the support they need at home and don’t have family members who are fluent in sign language. It went from language deprivation to extreme language deprivation. Parents would tell me to tell their kids that they need to do ‘X, Y, and Z’ at home and before virtual school, because they don’t have that ability to communicate clearly with their child. It was left up to us to make sure that they understood the routines at home as opposed to the parent taking on that responsibility. Some parents get through the language barrier by writing; some might know basic ASL). But none of my parents are fluent in signing.

On top of that, many students had unstable Wi-Fi, which caused lagging videos and being unable to clearly see signing on their screens. Some students used that as an excuse to not participate.

How did you try to keep them engaged?

It was challenging to come up with different ways to try to keep them engaged. A lot of schools said they didn’t require the camera-on rule and just asked their students to participate in the chat — that wasn’t enough for us. We needed their cameras on in order for any teaching to really happen. Some students in our classes are Deaf while others have varying degrees of deafness. So it’s essential that cameras are turned on so that they can give their responses using ASL as well as verbally. We had to really emphasize that to parents who didn’t enforce cameras-on at home.

We learned a lot in trying to make every aspect of the curriculum accessible to every student.

I was up all night signing videos so that they can have access to readings we would work on the next day. That was very difficult, but we did it.

Some of our students actually did extremely well with technology. One student started his own Zoom class where he would meet up with classmates. It was great because they didn’t have anyone to talk to at home, but they figured out a way to Zoom so they can have each other to sign with and play games virtually.

Was there anything from the virtual classroom experience that you would want to continue next school year when all students are back in the classroom?

The parents being on board and overall parental involvement — I hope that stays. During our remote classes, if I told the class, `Five of you didn’t do your homework today,’ almost instantly I’d have a mom interrupt and ask ‘Is my son one of those five?’ We didn’t have that before. Even if we sent a note home to the parents, it didn’t mean anything. But in that moment of live classes from home, where a parent is listening in, they would get involved and hold their students accountable for their assignments. I’d love for that to stay once we return to school.

What do you want people to know about Bruce Street School for the Deaf?

A benefit of Bruce Street School is having Carver Elementary School students in the same building. That is a huge benefit for us because we have so many children that aren’t fully deaf who can be part of inclusion classes with general education students. They have a teacher of Deaf (or TOD) for support. They can be in both worlds. Having them right next door is one thing you won’t see at many Deaf schools around the country. We have the benefit of having those hearing classes, which means students can go to specials together, they can have lunch together — pre-COVID, at least — so they can create bonds with the hearing population.

How do you feel about being named Newark’s Teacher of the Year?

The day I found out, there were tears. Lots and lots of tears. I did not think it was going to be that big of a deal. When I saw the outpouring of emails, congratulations, and well wishes from people who I’ve never even met before, people from the Deaf community that I didn’t know, it was amazing. It was definitely humbling. It makes me want to do more because I feel like everyone’s watching. I need to step my game up next year. It was definitely a moment that I will not forget. I’ve been here a long time and it was such an honor to just have my name considered. Even having people from the Deaf community that didn’t know our school was here to now know about us. I’m sure there are Deaf children that probably go to outside district schools because their families don’t know about Bruce Street School. But, hopefully, they’ll be here now.

This article was originally posted on This Newark educator returned ‘home’ to teach Deaf students. Now she’s the district’s Teacher of the Year.