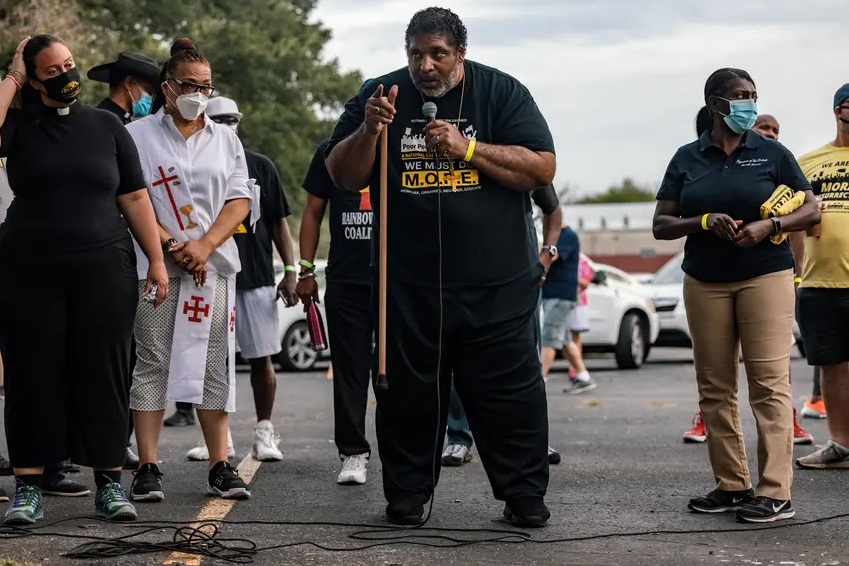 When the Rev. Dr. William Barber speaks, his listeners lean in. His large frame bent forward, the lilt in his voice easily fills the space between them as he preaches on racial and economic equality and justice.

But on this muggy, overcast morning in Georgetown, a suburban community north of Austin, the pastor turned activist did not rise to sermonize. On Wednesday, and for the next few days, his ministry will be carried out by marching.

From the grounds of the Christ Lutheran Church, Barber led a group of about 100 people, the number capped because of pandemic precautions, spaced out in rows of threes and fours on the first leg of a four-day, 27-mile march to the state Capitol building in Austin. The purpose behind the trek, organized by the Poor People’s Campaign, which Barber co-chairs, is to build pressure on Congress, particularly the U.S. Senate, to pass sweeping federal legislation that would boost or safeguard access to voting — and preempt much of the contentious voting bill that the Texas Legislature is expected to pass.

“We are here today because of a mandate,” Barber told the crowd of marchers before they began their journey. “These state legislators have mandated that we must have federal intervention.”

On Wednesday, the winding crowd of marchers traversing south along the frontage road of a busy Interstate 35 was made up of Texans from across the state and included members of the clergy, Austin’s state Sen. Sarah Eckhardt and average Texans who wanted to see federal action on voting. Former congressman Beto O’Rourke, who with his voter outreach organization Powered by People partnered to host the march, walked at the tail end.

Over the next few days, the march will proceed to various places of worship along the way. Marching groups are supposed to rotate out after a few hours of walking — the highs for the week will be in the high 90s though the heat index will push the temperature a few degrees higher — and the march will culminate in a Saturday morning rally at the Texas Capitol.

The 27-mile march, organizers said, draws inspiration from the historic Selma to Montgomery marches that played a crucial role in the passage of the landmark Voting Rights Act of 1965 to shore up the right to vote for Black Americans.

But the contemporary push for federal legislation to protect the vote has fallen well short of the groundswell it took for Congress and former President Lyndon B. Johnson to act.

For months — as GOP-controlled legislatures across the country moved to enact new restrictions on voting — voting rights advocates have called on the Democratically controlled Congress and President Joe Biden to push through federal legislation that could stem that tide. Their goal rests on two federal bills that would restore sweeping protections for voters of color previously contained in the Voting Rights Act — which has been whittled down by U.S. Supreme Court decisions — and set new federal standards for elections to widen access to the ballot box. But it still remains uncertain that the legislation will make it a vote in the U.S. Senate where Democrats, who hold half the seats in the chamber, have not been able to overcome the filibuster’s 60-vote requirement.

“We have not gotten to that level of urgency that this crisis demands from us,” O’Rourke said in an interview ahead of the march.

He pointed to the Texas House Democrats’ quorum break — just the fifth in the Legislature’s history— as an important development in bringing the broader effort against new voting restrictions, like those contained in the GOP priority voting bill Democrats are blocking, to a fever pitch.

Like in other states, Texas Republicans have argued their proposals are meant to safeguard the integrity of the state’s elections and reduce the possibility of fraud, for which there is no proof on a widespread scale. The legislation bolsters access for partisan poll watchers and further tightens already stringent voting-by-mail rules. But GOP proposals would also outlaw local voting options meant to expand access to voting — namely those in diverse, Democratic Harris County — even though the top elections official for the Texas Secretary of State has told lawmakers he is not aware of evidence of fraud tied to those initiatives.

O’Rourke indicated the march is meant to nationalize the Texas fight to push its gravity on those in power in Washington, D.C. — the one place, he said, where the fight could be won.

“You cannot quorum break to victory against voter suppression and the right to vote,” O’Rourke said. “All you can do is buy us time.”

Since arriving in D.C. earlier this month, Texas House Democrats have framed their protest as a call on Congress to act since they don’t have the votes to keep the Republican-controlled Legislature from eventually writing the restrictions into law.

The starting point of the march is, in part, a nod to the place where what are considered the first successful trials against members of the Ku Klux Klan took place in the 1920s. (The case involved the assault of a traveling salesman, who was white, and not the violent terror the KKK inflicted on Black Texans).

But it also waves at Republicans’ loosening grip on power in the state that many view as the impetus for some of the restrictions under consideration by the Legislature. Williamson County, of which Georgetown is the seat, is among the suburban counties that in recent elections have shifted away from their GOP stronghold status.

Though her feet were planted in Texas on Wednesday, Amatullah Contractor, who traveled from Houston for the march, said their audience was ultimately “the people of power who promised us change.”

Referencing recent news reports about White House officials telegraphing that it was possible to “out-organize voter suppression,” she said it was “a little ridiculous” for political leaders with the potential to act to instead rely on voting and civil rights group amid their inaction. So instead, they are organizing through efforts like the Texas march to demonstrate the backing those in power may need to move forward with federal intervention, said Contractor, who serves as the Texas deputy director of Emgage, which works to engage Muslim Americans in the political process.