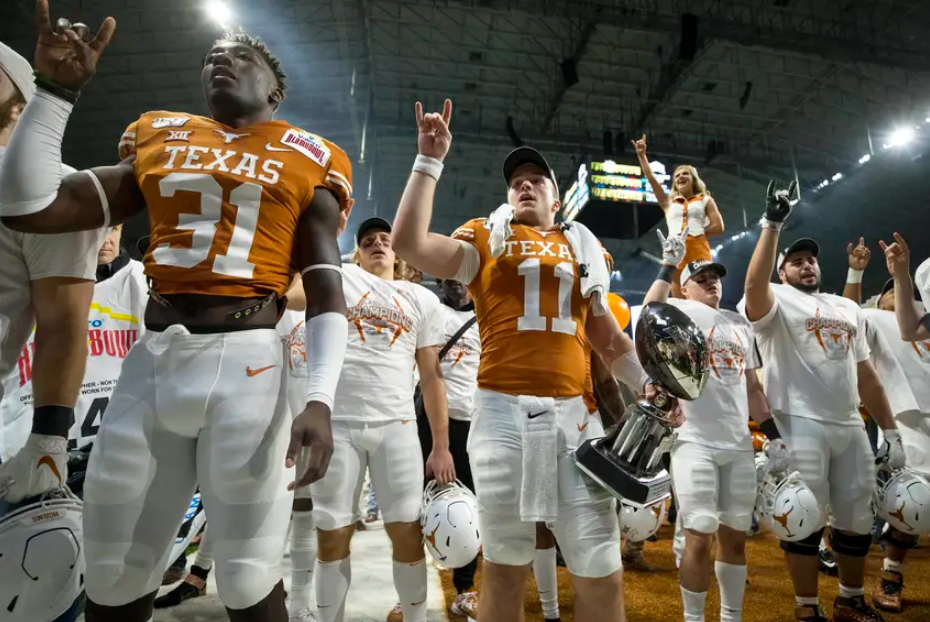 “We believe that there would be mutual benefit to the Universities on the one hand, and the SEC on the other hand, for the Universities to become members of the SEC,” UT President Jay Hartzell and OU President Joseph Harroz Jr. said in a joint letter to SEC Commissioner Greg Sankey.

Sankey said in a statement that while the SEC hasn’t actively pursued new members, it will welcome change when there is consensus among members.

“We will pursue significant change when there is a clear consensus among our members that such actions will further enrich the experiences of our student-athletes and lead to greater academic and athletic achievement across our campuses,” Sankey said.

The move leaves the rest of the Big 12 conference, which includes Texas Tech University, Baylor University and Texas Christian University, in a state of uncertainty. On Monday afternoon, Big 12 Commissioner Bob Bowlsby said in a statement that the remaining eight institutions will work together to ensure future success.

“Although our eight members are disappointed with the decisions of these two institutions, we recognize that intercollegiate athletics is experiencing rapid change and will most likely look much different in 2025 than it does currently,” Bowlsby said. “The Big 12 Conference will continue to support our member institutions’ efforts to graduate student-athletes, and compete for Big 12 and NCAA championships.”

The departures of UT and OU could have major financial ramifications on the Big 12 and its remaining schools. UT and OU are the conference’s most prominent football programs, and the conference could stand to lose significant revenue from a television contract without them.

TCU spokesperson Holly Ellman said in a statement Monday afternoon that the school will continue to make decisions that best serve its student athletes, its community and the long-term success of its athletic programs.

“We have nothing to announce at this time but have been engaged in deliberations with our conference colleagues and others and continue to support the Big 12 and its members,” the statement said.

Membership in a “power” athletics conference is a major driver of revenue and attention for universities. Texas Tech athletics made $90.4 million in athletics revenue during the 2020 fiscal year. Revenue earned from the Big 12 accounted for more than one-third of those earnings. Losing UT and OU could put the Big 12’s status as such a conference in question.

This isn’t the first time UT has weighed leaving the Big 12. It happened 11 years ago when the university considered joining the Pac-12 conference alongside Texas A&M, but it eventually opted to stay put. A&M ended up leaving for the SEC, and its leaders have since made it clear they want to be the only Texas school that is part of that league.

“A&M is a flagship university, and with the size and scale of our place, we should have our own stand-alone identity in our own conference,” A&M athletic director Ross Bjork said last week.

A&M’s board of regents will continue discussions on the topic during a special meeting at 4 p.m. Wednesday. They began conversations Monday but stayed in closed session for the entirety of the conversation.

The move has also generated pushback from lawmakers, with Republican Lt. Gov Dan Patrick saying on social media that he wanted to form a legislative committee to study the athletic and economic impact of UT’s exit on other Texas schools and communities. State Sen. Jane Nelson, R-Flower Mound, was asked to chair the committee.

“We are going to have a fair, unbiased hearing to delve into how the changing landscape in college sports might impact our economy here in Texas,” she said.

State Rep. Dustin Burrows, R-Lubbock, also attempted legislative action. He filed a bill Friday that would prohibit Texas public colleges and universities from switching their affiliations with collegiate athletic conferences without a vote from the Legislature, but the move is purely symbolic.

The legislation is not on Gov. Greg Abbott’s special session agenda, meaning lawmakers cannot take it up.