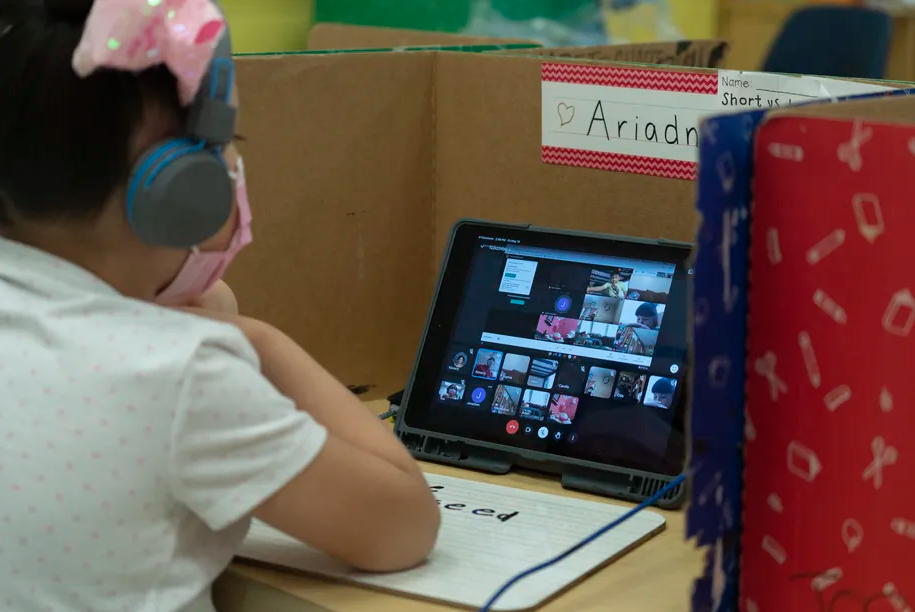 That explains about a quarter of the country’s overall public school enrollment drop during the pandemic, when headcounts fell by about 1.1 million students.

“It’s a pretty striking indicator that parents, particularly parents of younger children, found the offer of remote-only schooling fairly objectionable, and many chose to leave,” said Thomas Dee, a professor in Stanford’s Graduate School of Education who co-authored the working paper released Saturday. “Any way that breaks, it’s going to have educational implications.”

Having no in-person learning option reduced kindergarten enrollment by an estimated 3% to 4%, the researchers found, and those numbers trended higher in states that don’t require kindergarten. Fully virtual plans may have also contributed to more absences among younger students.

The effect was smaller for older students, with all-virtual learning reducing elementary school enrollment by 1% and having no discernible effect on enrollment in middle and high school grades.

The new analysis helps confirm previous reporting by Chalkbeat and The Associated Press that found whitestudent enrollment dipped more in states where students had fewer options to learn in person. As schools nationwide promise in-person learning for the school year ahead, the numbers also illustrate the size of the task ahead for districts looking to re-enroll students who started their school careers elsewhere.

The researchers analyzed enrollment data from 875 school districts, looking at 2020-21 counts and five years of historical data to account for changing demographics. (The districts they examined tended to be more urban and suburban and enroll more students of color than the nation as a whole, though their pre-pandemic enrollment trends tracked the country overall.) Researchers paired that with data from Burbio, which has tracked the kind of instruction school districts offered during the pandemic.

In those districts, researchers found that offering a mix of in-person and virtual instruction didn’t have a noticeable effect on student enrollment. But offering only remote instruction reduced enrollment by an additional1.1 percentage points.

Offering remote-only instruction hurt public school enrollment more in school districts that served rural communities, higher concentrations of Hispanic students, and lower concentrations of Black students. That matches up with polls that have shown Black parents have been more wary of in-person instruction and more supportive of virtual plans throughout the pandemic.

The long-term effects of these patterns will depend on where exactly students ended up instead of public school, Dee said. Some students may have attended private kindergarten, while others may have skipped kindergarten altogether.

“They’re going to bring very different readiness-to-learn challenges to the classroom,” Dee said. Though if many parents held their young children back a year, that could create unusually large kindergarten classes this fall with more students of mixed ages and abilities.

Many school districts took extra steps this spring and summer to reconnect with families and to encourage them to enroll their children in school. Some blanketed communities with yard signs, while others held virtual tours to show families the health and safety precautions they were taking.

In Spokane, Washington, where students started last school year fully online, enrollment dropped by nearly 7%. Officials there have used text messages and mailers to reach families, and emphasized their plans to reduce class sizes as a selling point.

“We want to create as much predictability, and try to mitigate a sense of unknown and fear, to the greatest extent possible,” Superintendent Adam Swinyard said in June.

In Little Rock, Arkansas, literacy instructional coach Pamela Criss is hoping that the students her school district couldn’t account for last year will return. Her district offered both fully virtual and fully in-person instruction last fall, and saw just over a 3% drop in enrollment, mostly in kindergarten and other elementary school grades. The district had been losing enrollment before the pandemic, but the decline was steeper last year.

“We had so many students that did not show up on the roster, they were not at school, they were not on Zoom,” Criss said. “We’re like, where are these students? Are they at home, or have they gone somewhere else?”

Now, Criss, who trains teachers and helps students across the district improve their reading skills, wants to make sure educators are looking closely at how those students are doing academically and getting them help if they need it.

“I wanted to look at their data to see if those are the students who were already behind,” she said. “We have to be very intentional and purposeful about our planning, about our teaching and learning. Because we just can’t leave it to chance.”