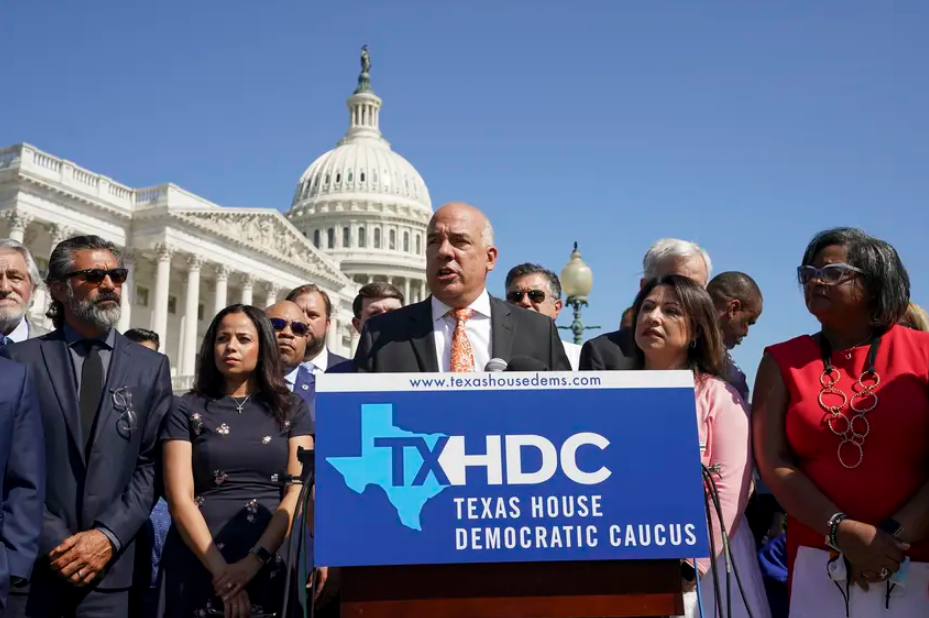 With a Saturday start date set for a second special legislative session, Texas House Democrats who have camped out in the nation’s capital for more than three weeks to stymie a GOP voting bill said they are still mulling their next move.

State Rep. Chris Turner, the Grand Prairie Democrat who leads the party’s caucus in the House, indicated Thursday evening there was no immediate plan yet for the group of Democrats who have denied Republicans the quorum needed to pass a contentious elections bill and several other GOP priorities in a first special session that ends Friday.

“We’re discussing what’s next,” Turner said. “What is certain is that our caucus is unified in continuing to fight against these anti-voter bills and all these other unnecessary red meat issues that are simply designed to help [Gov. Greg Abbott] in his next primary election.”

As part of their regular routine, the Democrats in Washington were convening in their hotel conference area when Abbott announced Thursday afternoon that he would call lawmakers back on Saturday to gavel in a second special session. The group paused to review the governor’s 17-item agenda, which features the elections bill that prompted them to leave the state last month.

Democrats have several options: Return to the Capitol in Austin, return to Texas but stay put in their districts and risk arrest under House rules that allow members to be compelled to attend, extend their stay in Washington or head to another state where they could continue to break quorum outside the reach of state law enforcement’s jurisdiction.

After Democrats first left the state, the House voted overwhelmingly to issue what’s known as a “call of the House” in an effort to regain quorum and send law enforcement after them, though the effort had no reach beyond state lines.

Still lacking a quorum to conduct business, House Speaker Dade Phelan’s office on Thursday nodded at the Democrats who didn’t join the quorum break and have been reporting to the chamber while it remains at a standstill.

“Special session will begin anew on Saturday and the bipartisan group of members who stayed in Texas look forward to being joined by their House colleagues to address the items on the call, including relief for retired teachers, improving the foster care system, and addressing election integrity,” said Phelan spokesman Enrique Marquez.

The elections legislation has escalated partisan tensions in the Texas Capitol over the last few months as Republicans pushed to enact new voting restrictions and ratchet up the state’s rules in the name of “election integrity,” while Democrats joined the chorus of civil rights attorneys, voting rights groups and advocates for people with disabilities who raised concerns that the legislation could heighten barriers for marginalized voters.

Since arriving in Washington in early July, House Democrats have acknowledged they don’t have the votes to keep the Legislature’s Republican majority from passing the legislation. They decamped to the capital to lobby Congress to act on far-reaching federal legislation that could preempt some of the GOP’s proposals.

“When we left nearly four weeks ago we set out a clear goal, which was to kill the bill this session and use the time productively here in Washington to urge passage of federal voting rights legislation, and tomorrow we’ll be able to report success on both fronts,” Turner said.

The first special session will expire Friday. Democrats are planning a press conference on Capitol Hill on Friday morning to mark its end and stake some claim in the recent movement in the U.S. Senate to work on an election bill.

Back at home, GOP leaders have suggested they are not likely to further tweak their proposals. Lt. Gov. Dan Patrick, who vowed the Senate would move quickly on the special session agenda, has said the elections bill will eventually pass “pretty much in the form that’s in.”