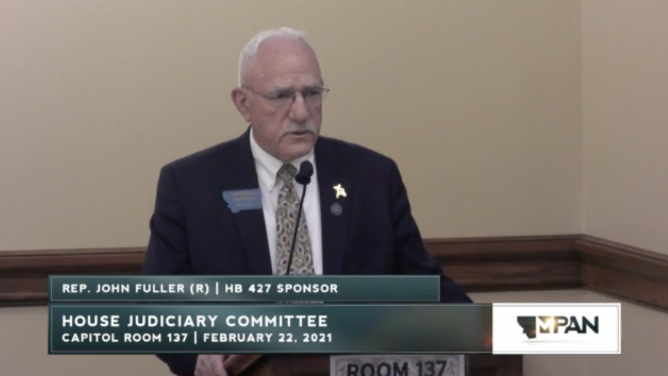 HELENA — For the second time this session, lawmakers on the House Judiciary Committee have forwarded a bill that would prohibit certain kinds of medical treatment for transgender and nonbinary youth. The proposal, which passed nearly along party lines, was the subject of emotional and frustrated testimony on Monday from parents, medical providers and advocates.

House Bill 427 is an echo of the unsuccessful House Bill 113, a more wide-ranging attempt to block minors from receiving medications and therapies for gender dysphoria, which narrowly failed to pass the House in late January. That bill would have prevented physicians from providing puberty blockers or hormone treatments, as well as surgery, to people under the age of 18 after they have been diagnosed with gender dysphoria.

In its new iteration, the bill seeks to specifically prohibit medical providers from performing surgery on trans minors, including gender-affirming mastectomies or augmentations, voice or facial alterations, and any procedures on genitalia. Physicians would also be banned from issuing referrals for youth to seek those treatments elsewhere. Currently, it is not considered within best-practice standards for doctors to conduct genital surgeries until a trans or nonbinary patient turns 18, making those treatments on minors exceedingly rare nationwide.

Medical providers were among those who spoke against the bill Monday, arguing that it could have widespread implications for many pediatric specialists in Montana, even if they are not working directly with youth experiencing gender dysphoria.

“I’m asking you to allow trained physicians and other medical providers to continue to make good medical decisions, with family members,” said Dr. Erin Grantham, head of Pediatric Urology at Billings Clinic. “Passage of HB 427 unequivocally will prevent us from doing our jobs well and will do direct harm to vulnerable Montana children and their families.”

Both HB 113 and HB 427, in addition to a bill that would ban trans women and girls from participating on women’s interscholastic sports teams, are sponsored by Rep. John Fuller, R-Kalispell. Speaking to members of the House Judiciary Committee on Monday, Fuller explained that his intent is to protect young people from pursuing treatments they may regret later.

“Children live under the guardianship of adults precisely because they lack the maturity, prudence and experience to make safe, responsible decisions for themselves,” Fuller said. “When gender dysphoria is in the mix, these decisions can have lifelong consequences.”

Other proponents who testified favor of the bill, as well as one lawmaker on the committee, characterized trans and nonbinary youth as suffering from a mental illness that should not be treated with lasting medical techniques such as surgery.

The latest edition of the Diagnostic and Statistical Manual of Mental Disorders explicitly states that gender non-conformity is not a mental disorder, making the distinction that gender dysphoria may arise from a sustained feeling of incongruence between the mind and body, as well as social marginalization.

Medical groups including the American Academy of Pediatrics, the Endocrine Society and the American College of Obstetricians and Gynecologists support a range of treatments that can help address distress, anxiety and depression among trans and nonbinary people. First among those are social transitioning and affirmation, particularly for younger children and adolescents, which can later be followed with puberty suppressants and, eventually, hormone treatments. Gender-affirming surgeries may come much later in a person’s development and are recommended only after careful consideration.

“Treatment of patients with gender dysphoria is in accordance with best practice of medicine, according to medical guidelines,” said Heather Zaluski, chief medical officer of psychiatry at Shodair Children’s Hospital in Helena. She cited a summary of clinical evidence from the Center of Medicaid Studies that describes gender-affirming surgeries as “safe, effective and necessary in treating gender dysphoria.”

“House Bill 427 will not heal broken lives, but rather it will add to the pain of distressed children and their families who are looking to their physicians for help,” Zaluski said.

Transgender and nonbinary adults, as well as the parent of a transgender teen, expressed deep disappointment and distress at the bill being introduced weeks after the first bill failed to pass the House. Opponents reiterated that the Legislature should not interfere with safe and effective medical treatments for minors.

“I’ve heard people say children are too young to make life-altering decisions, as if my child does not already have the best protection I can provide and the best medical care and the best mental health care. As if decisions about his health care and life situation are made frivolously,” said John Ewan, who did not state his place of residence but described himself as a lifelong Montanan. “You don’t know what it’s like to see your child’s constant struggle with trying to appear the way he perceives himself to be. You don’t see the toll this takes on him every day. … I see it every day, and it breaks my heart. This bill doesn’t protect him from any of that. It strips protection from him.”

Some opponents described the harm caused by the new bill, even in the early days of its introduction. Shawn Reagor, an organizer with the Montana Human Rights Network, told lawmakers that he spent last week responding to the suicide attempt of a 19-year-old trans woman. According to her roommate, Reagor said, the incident was sparked by the news that another version of HB 113 had been put before the Legislature.

“You’ve heard from a number of opponents about many of the unintended consequences of passing this bill. A solution in search of a problem with potentially devastating effects,” Reagor said. “The consequences for the transgender community members are life and death. … The actions that you take today and the vote that you take today will have life-and-death effects.”

The committee voted to pass the bill 11-8, with Rep. Mallerie Stromswold, R-Billings, the lone Republican to side with Democrats. It has not yet been scheduled for a hearing on the House floor.