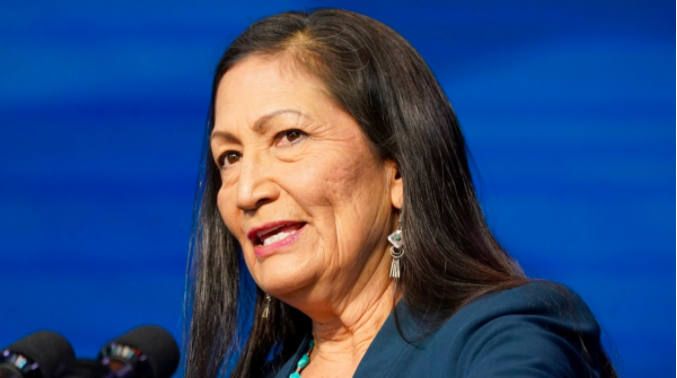 In a letter to Sen. Steve Daines and U.S. Rep. Matt Rosendale, nine members of the Montana Legislature’s American Indian Caucus said they are deeply concerned about the U.S. lawmakers’ opposition to Deb Haaland’s nomination to become the next Secretary of the Interior.

They wrote that they are offended by the congressmen’s claims that Haaland, a Laguna Pueblo citizen and  Democratic U.S. representative for New Mexico, lacks understanding of land and wildlife management issues.

Last week, in a release issued after he met with Haaland, Daines said he is “deeply concerned with the Congresswoman’s support on several radical issues that will hurt Montana.” He named her support for the Green New Deal and opposition to the Keystone XL pipeline as policy positions he’s particularly concerned about. He also said Haaland demonstrated “a lack of appreciation for issues that impact Montana such as wildlife management and hunting and sportsman access.”

Rosendale wrote a letter to President Joe Biden on Jan. 26 urging him to rescind Haaland’s nomination. His argument focused heavily on energy policy and included references to Haaland’s support of the Green New Deal and position on stopping federal oil and gas leasing. He wrote that Haaland’s nomination represents a “direct threat to working men and women and a rejection of responsible development of America’s natural resources.”

In their Feb. 10 letter, members of the state Legislature’s American Indian Caucus pushed back on those characterizations of Haaland, who could become the first Indigenous person to lead the Interior Department. They said she has a deep understanding of the relationships between people, lands and wildlife, and that attempts to suggest otherwise are “patently false.”

They went on to say the implication that Haaland doesn’t adequately understand the relationships between people, land and wildlife is “deeply offensive to all Native Americans and the generations of Indigenous people who have lived on the land and managed it sustainably for generations.”

The nine Democratic signatories also referenced Interior Department nominations from the Trump White House: “When the previous administration nominated a known extractive resource lobbyist with nearly two dozen conflicts of interest to be the Interior Secretary, not a word of concern was spoken. Adding insult to the lack of tribal consultation during the past administration was the hiring of known racist and zealot William Perry Pendley.”

The Montana lawmakers say Haaland is well-qualified for the position, given her experience chairing the congressional National Parks, Forests and Public Land Committee and serving as vice chair of the House Natural Resources Committee.“She is also uniquely qualified to uphold the federal government’s treaty and trust responsibilities to Native American tribes, a priority for all Montana tribes,” they wrote.

They said that Haaland is familiar with many of the issues Montana policymakers tackle on a regular basis. “She also comes from and represents a state, much like Montana, that must work to strike a balance between tribes, natural resource development, and public land users while ensuring those lands are viable for future generations,” they wrote.

In closing, they urged Daines and Rosendale to reconsider their judgment on Haaland’s nomination until the confirmation hearing has concluded, and to get “on the right side of history and join us in supporting this historic nomination that will benefit all Montana’s eight Native American Tribal Nations, the great State of Montana, and the United States.”