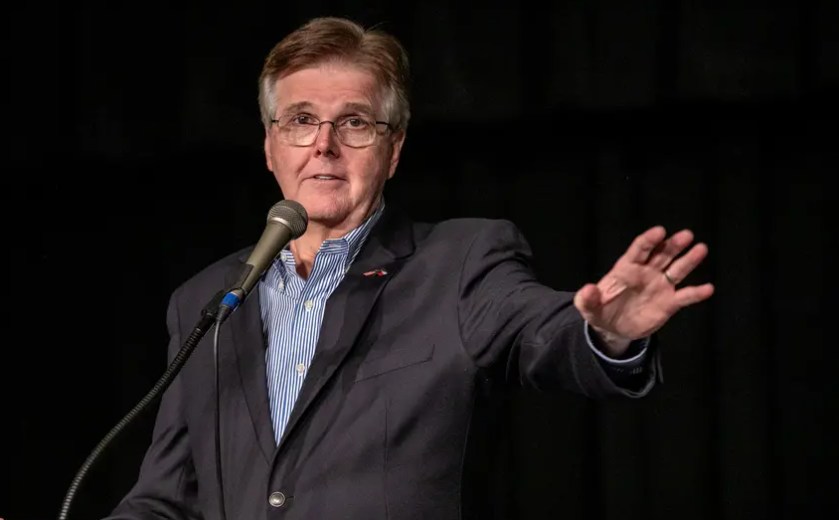 In 2015, Dan Patrick stormed into his first legislative session as lieutenant governor declaring it a “new day” in Texas, claiming a mandate for conservative policy from voters in the prior election.

Two years later, Patrick embarked on his second session with an early and aggressive red-meat agenda meant to build pressure on a resistant House.

In 2019, Patrick played the eager participant in the united front that the new Big 3 — himself, Gov. Greg Abbott and new House Speaker Dennis Bonnen — sought to display as the session began.

Heading into his fourth session, Patrick has been quieter.

Normally drawn to the spotlight, the lieutenant governor has had an unusually low profile in the opening month of the session. He has not been entirely missing in action, but the Dan Patrick that many in Austin have come to know has not yet surfaced, especially when it comes to making clear what he will push hard for this session.

The potential reasons are numerous. The coronavirus pandemic largely overshadowed the lead-up to the session, as well as its opening days. The core issues heading into the session were obvious: a budget deficit, redistricting and pandemic relief. And state Republican leaders are all trying to find new political footing after a November election that saw them beat back an all-out Democratic offensive down ballot but lose a reliable White House ally in Donald Trump.

Patrick was Trump’s top booster in Texas, chairing his state campaigns in both 2016 and 2020.

“I think what you’re seeing with Patrick is a very cautious view of what’s going on” politically, said Bob Stein, a political science professor at Rice University. “I think what Patrick understands realistically is the smart move is to see where the lay of the land is.”

Patrick’s agenda is expected to come into focus soon. His office says he “will announce his 31 legislative priorities for this session in the next few days.” Asked about those priorities in an interview with Lubbock radio host Chad Hasty on Tuesday, Patrick listed a handful of ideas that Abbott has advocated for ahead of the session, including legislation protecting businesses from COVID-19-related lawsuits, placing new rules on how elections are run in the state and an expanding broadband internet access.

In a statement for this story, Sherry Sylvester, a senior adviser to Patrick, ticked off a list of things the Senate has done so far, including overseeing the development of coronavirus precautionary measures and appointing new committee chairs for the ongoing session.

“The Texas media, including the Trib, rarely report the actions and initiatives of the conservative majority unless they can find a way to disparage them, which results in their frequently being unaware of what is going on,” Sylvester said. “Lt. Governor Patrick is moving a conservative agenda forward, just as he always has, defending life, liberty and the Second Amendment and months of work on a principled conservative budget that fully funds education despite economic setbacks from the pandemic.”

Patrick, of course, could be holding his cards closer to the vest than usual. That appeared to be his approach in the weeks after the November election, when Republicans lost their supermajority in the state Senate and many wondered whether Patrick would push to change the rules to create a new, lower supermajority threshold. After a period of conspicuous silence, Patrick announced a plan to do just that — and the Senate approved it on a party-line vote on the second day of session.

Patrick has otherwise used the public spotlight so far this year for issues largely unrelated to a legislative agenda. Late last month, he held a news conference in his hometown of Houston to urge the city’s Democratic leadership to negotiate with its firefighters union. Around the same time, Patrick took a public stance on vaccine distribution, endorsing a rollout plan that he said would give Texans a clearer idea as to when they could reasonably expect a vaccine injection. And he spoke at the Texas Public Policy Foundation’s Policy Orientation conference last month, railing against the then-ongoing impeachment trial against Trump and chastised the far-right Trump supporters who had laid siege on the U.S. Capitol just a week prior.

Still, Patrick was notably muted after Abbott’s State of the State speech last week, especially after promptly volunteering laudatory statements following Abbott’s previous biennial addresses. Patrick’s office said it provided a statement to the Austin American-Statesman that said the governor’s concerns will be included in his list of priorities.

“I have been working for months with the Texas Senate and the governor’s office,” the statement said, later nodding to the preliminary budget bills both the House and Senate filed in late January.

The other two members of the Big 3 — Abbott and new House Speaker Dade Phelan — have kept higher profiles in the opening weeks of the session. Abbott has been especially visible due to his State of the State speech, during which he presented a list of items he considers priorities, and his statewide travels leading up to it. Phelan has done less to flesh out his priorities, though he has grabbed attention for things like his overhaul of committee leadership. Both the governor and speaker have done a battery of media appearances; Patrick has not done much beside his regular Fox News appearances.

While Patrick and the state’s two other top leaders are not being as showy about their session plans as they were in 2019, there are no signs of discord from the outset. They met Jan. 27 for their first weekly breakfast of the session, and Patrick tweeted a picture of the trio afterward, saying they were “united in our goal of making Texas even greater.”

Abbott defended Patrick in a statement for this story, saying “there is not a week that goes by that Lt. Governor Patrick and I are not in communication, whether that is meeting in person over the phone.”

“He has been instrumental in the state’s response to COVID, a strong legislative partner, an ally and friend,” Abbott said. “We will continue to work together on all issues affecting Texas to ensure a brighter future for every citizen in our great state.”

Both Abbott and Patrick are up for reelection in 2022, and while both have long said they plan to run for their third terms, Patrick has said it would be his last term if he wins.

Outside the Capitol, there is less certainty about Patrick’s plans for the session. The state GOP chairman, Allen West, is making an aggressive push for the party’s eight legislative priorities, which include “election integrity,” abolition of abortion and constitutional carry, or permitless carry of firearms. Jill Glover, the chairwoman of the Texas GOP’s Legislative Priorities Committee, said Friday she was waiting to hear more from Patrick about his agenda.

“I do not know what Lt. Gov Dan Patrick’s priorities are, but my hope and expectation is that he will support the eight legislative priorities that our Republican voters indicated are most important to them,” Glover wrote in an email. “We look forward to hearing more from the Lt. Gov.’s office and working with him in passing these priorities.”

Mike Openshaw is a conservative North Texas activist who served on the short-lived Grassroots Advisory Council that Patrick formed at the start of his first term. Openshaw said Patrick has been “particularly quiet” among state leaders as the session gets underway.

“I gather he’s a lot more worried about COVID than some others are; don’t know if that’s part of it,” Openshaw said. “But it sure seems like we’re in for much more of a ‘do the bare minimum’ session than we’ve had for a long time.”

Patrick’s attitude toward the pandemic — and the sense that it has gone through an evolution — has been the talk of Austin.

The pandemic may also be impacting his tone. Months after amplifying misinformation about the respiratory virus, Patrick spearheaded stringent precautions for senators to adhere to during the first 60 days of the legislative session. Among the agreed upon precautions include rules requiring senators wear masks while on the chamber floor unless alone at their desks and limiting the number of guests allowed in the chamber.

“Lt. Governor Patrick took the lead in setting up COVID-19 testing for everyone who enters the Capitol and the Senate voted 31 to zero to maintain masks and social distancing while in session,” Sylvester said.

Of course, the same day the Senate passed COVID-19-related precautions, the chamber’s Republicans also spearheaded a decision made in part out of cold political calculation: changing the threshold needed to bring bills to the floor, which ended Democrats’ ability to block legislation they unanimously opposed.

“This will ensure that Democrats will not have veto power over the conservative agenda that the majority of Texans clearly support — as we saw in the November election,” Sylvester said.

Colleagues working with Patrick in the chamber say his perceived public reticence doesn’t mean the state’s second top Republican is absent behind the scenes. State Sen. Roland Gutierrez, D-San Antonio, said he’s eager to move past partisan talking points that have dominated past legislative years and focus on one of the biggest issues facing the state and nation currently, specifically the coronavirus pandemic.

“He hasn’t really been completely adamant about partisan issues. Our discussions have been primarily COVID, COVID, COVID,” said Gutierrez, a freshman. “That’s what we’ve heard most about. I’ll wait to hear his priorities down the road, but right now as I talk to constituents they want us to solve this horrible nightmare we’re living in.”