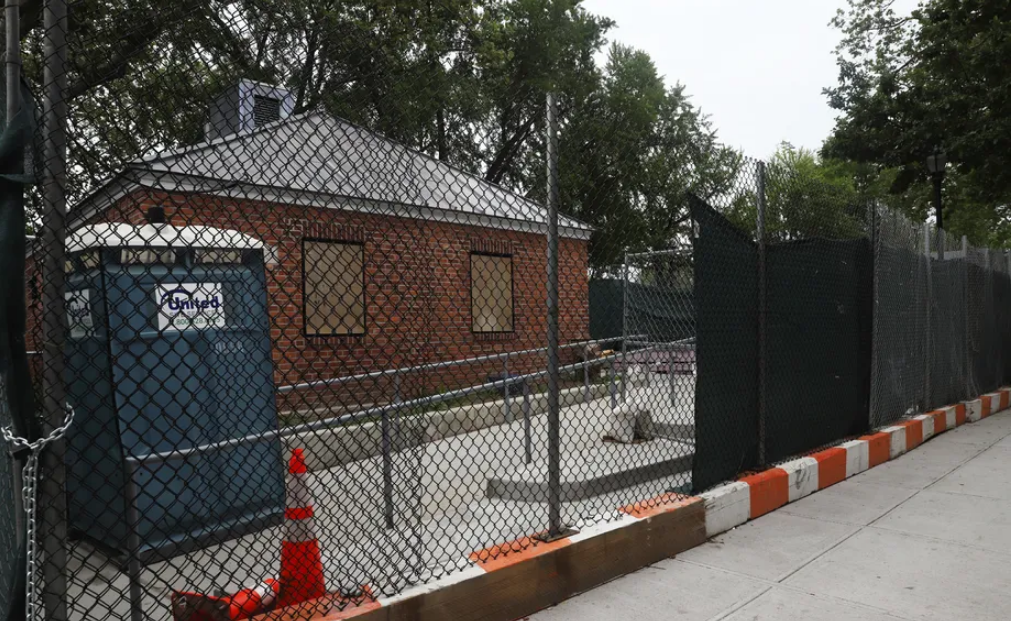 “Where are the bathrooms at Betsy Head Park?”

That’s a question Tamia Santana has been trying to get an answer to for weeks.

To her, the response is simple: There aren’t any. At least, not where the majority of kids play in the 10-acre Brownsville park.

The full story is a bit more complicated, but visitors are left with few immediate options for relief — and no signs telling them where to go.

Santana, who lives in Crown Heights, said she first noticed the problem a few months ago when she started taking her son to Betsy Head for his soccer league.

“We started to realize there’s no bathrooms around,” she said. “We were just like, ‘Don’t drink much before you go’  — and that’s pretty messed up.”

Then, she said, things took a turn for the worse.

“[A few] weeks ago I saw a child defecate on himself, because there’s no bathrooms,” Santana said. “And at that point, I just, like, flipped out.”

For her, the results were less than satisfying.

In an email, a spokesperson for Ampry-Samuel told her, “We are working with our community partners Friends Of Brownsville and the NYC Parks Department to have more port-a-potties in the park.” The spokesperson directed her to portable toilets at the corner of Dumont Avenue and Bristol Street, near the playground — five blocks away from the nonfunctioning permanent bathrooms.

Officials note Betsy Head Park is currently undergoing “capital” improvements. According to the Parks Department’s website, one bathroom (or “comfort station”) near the playground is currently under construction on Bristol Street and is scheduled to open in September.

Another bathroom in the southwest corner of the park at Livonia Avenue and Strauss Street is slated to reopen next spring.

There is a temporary toilet visible through the construction fencing that surrounds the soon-to-be renovated bathroom, but it is locked off to the public.

“The fact that there’s not one working bathroom for children is crazy. I’ve just never seen anything like that,” Santana said. “Why would they do this to families in Brownsville?”

When asked by THE CITY about the possibility of adding more port-a-potties at Betsy Head Park, the Parks Department gave no indication that’s in the works. “The addition of the portable toilets is a courtesy we extended to better serve the community particularly during the busy season,” the department said in a statement.

The portable restrooms at the playground at Betsy Head aren’t readily visible from the playing fields. As of June 19, there were no signs telling people where to find them.

When asked if they would install signs to inform people of where they can use the bathroom, Anessa Hodgson, a Parks Department spokesperson, said, “There is no plan to install signage here.”

Going Where They Can

In the absence of bathrooms near the field and a lack of signage pointing them to the playground port-a-potties, park visitors have resorted to less desirable options.

John Toledo and his family came to Betsy Head Park from The Bronx on June 19 to watch his son’s football game. About 30 minutes after he arrived, his daughter had to use the bathroom. With only the fenced-off bathrooms in view, the father and daughter found a nearby bodega and asked an employee if they could use the bathroom.

Toledo said the “very polite” staffer at the bodega said okay. But the bathroom light wasn’t working, so his 12-year-old daughter had to go in the dark. He later added that they were told there was a portable toilet about three blocks away near a construction site, but they couldn’t find it.

Abrahim Ahmed, an employee at a bodega down the block from the fenced-off bathrooms, told THE CITY that people come in “two or three times a week,” asking to use the facilities.

Samantha Ramos, a nurse from The Bronx, said she suffered for over five hours while she was at Betsy Head Park.