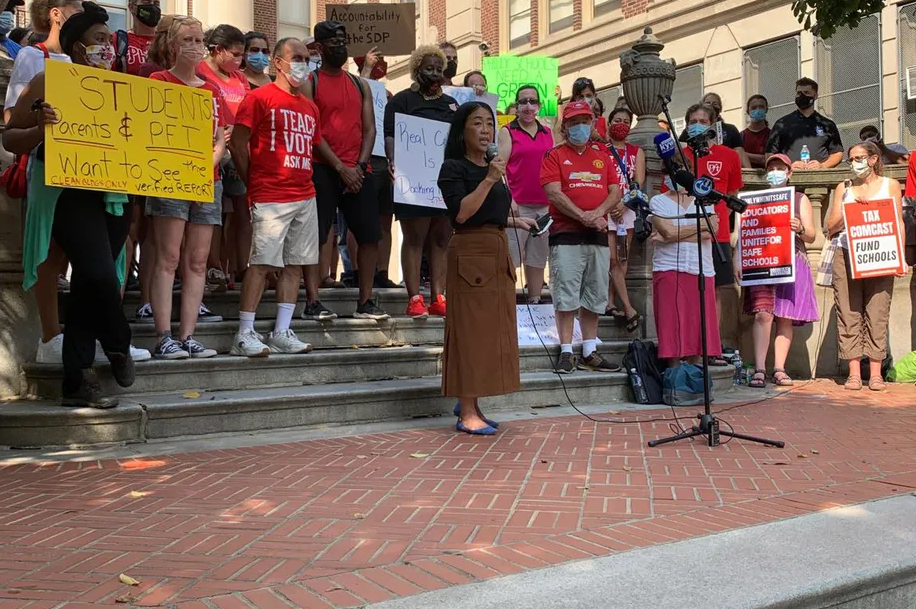 Teachers at Philadelphia’s Julia R. Masterman School worked outside all day Thursday, saying they felt unsafe inside the building due to unresolved asbestos hazards and a lack of credible information or collaboration from the school district in addressing the issue.

When students and parents turned up for a scheduled ninth grade orientation around 11 a.m. they gathered on the sidewalk as high school dean Justin Gilkin tried to organize meetings and other orientation activities.

Math teacher Ethan Tannen, a leader of the protesters and a 2006 graduate of the school, addressed the crowd.

“We do not feel safe working in the building,” Tannen told the assembled students and parents. “The district has continued to mismanage the issue of asbestos in school district buildings. We’ve decided we’re tired of waiting for information…We’ve made plans for this welcome back event to be held outside because we care about your safety more than we care about ours.”

Ted Domers, assistant superintendent for the cohort of schools that includes Masterman, said the building was safe and urged them to go into the auditorium to listen to a presentation about school safety.

The issue of dangerous conditions in Philadelphia schools, especially around asbestos, are longstanding, with parents and the Philadelphia Federation of Teachers complaining for years that the district has bungled remediation efforts districtwide and refused to be transparent about the actions it is taking.

The protesters said that district leadership has spurned collaboration with outside groups formed by parents and teachers to help safely manage its aging infrastructure. In the case of Masterman, built in 1933 and now the district’s most prestigious school, it has also declined to allow the PFT’s environmental scientist, Jerry Roseman, to independently inspect potential hazards.

“We addressed the 60 areas of damaged asbestos,” he said. “All of the work was conducted under the supervision of a third party certified asbestos project inspector. Based on the most recent inspection and repairs conducted, no known damage of asbestos remains at the school. These reports have been provided to the [Home and School Association] as requested, with the exception of the most recent report that is currently being finalized by the third party asbestos control team.”

In a later statement, the district said it provided thousands of documents in response to a Right-To-Know request, and that officials, including Chief Operating Officer Reggie McNeill, have met with members of Masterman’s Home and School Association, or HSA, to answer their concerns.

In an afternoon press conference held on the steps of the school, Barbara Dallao, head of the HSA’s environmental committee, said these steps are not sufficient. She demanded a joint evaluation and inspection of potential hazards with the PFT, public identification of all problems found followed by immediate remediation, and open data inspection of all environmental issues in schools.

Protest leaders were joined at the press conference by City Council members Helen Gym and Mark Squilla, both of whom took the district to task. Stressing that this is a citywide problem, Gym said more hazardous conditions “should have been resolved in school buildings that stood empty for 14 months.”

Roseman told the crowd that he has yet to receive enough documentation to be confident that Masterman is safe. He wants asbestos sampling data and testing results, a comprehensive list of all loose asbestos identified or recommended for remediation, and dates and scope of work completed.

Dallao said in an interview that getting information from the district has been difficult.

When parents asked for inspection reports required under the Asbestos Hazard Emergency Response Act, known as AHERA, the district required them (and the press) to file Right-to-Know requests and then made available for review only paper copies during a limited window of time.

“This is public information,” Dallao said. The district has said it plans to use a platform called Donsafe to house all inspection reports and make them publicly accessible, but has not said when that will happen.

PFT President Jerry Jordan issued a statement saying that the protest was not a PFT action, but backed the teachers’ contention that they don’t have the information they need.

“With more than 60 areas of identified asbestos exposure at the school, it is unconscionable that our requests should have gone unanswered for this long,” the statement said. “This situation has many parallels to what unfolded at McClure, Carnell, and nearly a dozen schools in the 19-20 school year.” Those schools had to be temporarily vacated to address asbestos hazards.

In blazing heat, the teachers set up their computers under red canopies just after 8 a.m. to work on what was scheduled to be  a professional development day. At around 9:30 a.m., Chief of Schools Evelyn Nunez told them to go inside the building, saying it was safe. She added that if they did not, they faced being written up for unauthorized absence.

Teachers also received an email from interim Principal Marge Neff who said “all staff are required to participate in professional development,” which was being done virtually and accessible from outside.

Of Masterman’s incoming ninth graders, very few are new to the school or the building. Students test into the magnet school starting at fifth grade. Almost all those accepted into the high school move up from its middle school.

Still, parents and students interviewed said they were troubled and stood by their teachers.

“I’m worried,” said Mary Eng, whose son Brian is entering 10th grade. The asbestos problem is definitely a concern, she said. “I feel if we all work together, we will get through it. But parents need to be in the loop.”

Maggie Li-Zhang, whose son Jason Zhang has been at Masterman since fifth grade, said she was confused. She sits on the School Advisory Council, where she has worked with Domers, the assistant superintendent, and said she has come to respect him. At the same time, her son had protest leader Tannen as a teacher “and loved him.”

Asked if she feels the school is safe, she said that the SAC talks about asbestos “all the time,” but doesn’t feel it has all the information. “Why is it so difficult for us to get at the truth? People are scared and confused and frustrated.”

At the ninth grade orientation, about a dozen people, mostly parents, accepted Domers’ invitation to enter the auditorium and listen to the presentation, which included information on initiatives to create “a safe, supportive and welcoming school environment.”

School security and a member of the district’s legal department would not allow a reporter to listen to the presentation and said members of the press must stay on the sidewalk.

The Masterman teachers and parents have started a petition to “demand, collaboration, transparency, accountability & safe schools” from the school district.