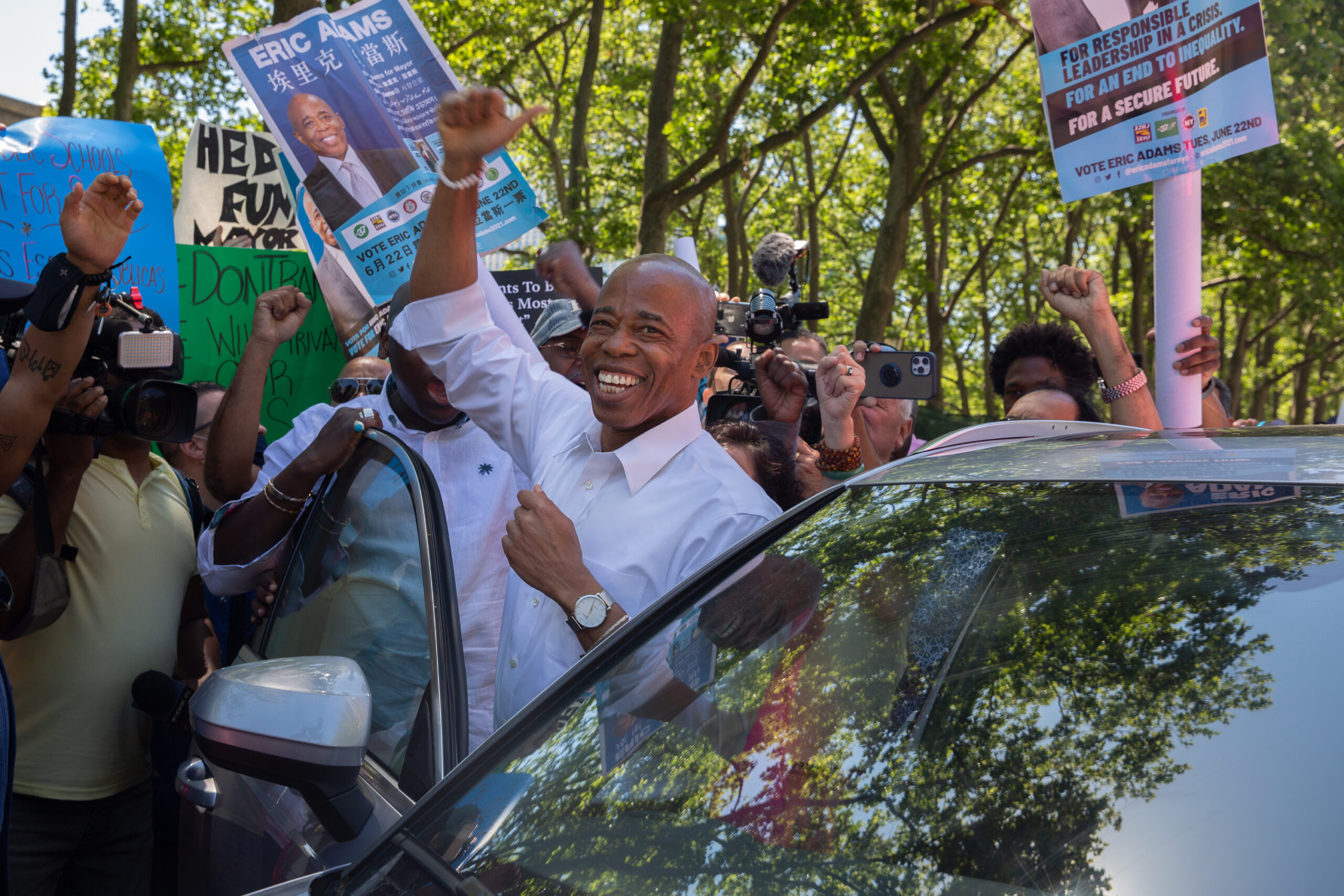 Mayoral frontrunner Eric Adams intervened in the potential sale of a Brooklyn co-op in 2017 that he insists he gave up his co-ownership of a decade earlier, according to a real estate agent who tried to broker the deal.

The new revelations counter Adams’ claims that he washed his hands of the Prospect Place one-bedroom in 2007 by giving his 50% share to the woman he had purchased the unit with in 1992.

There are no public records of such a transaction. And a newly surfaced document reviewed by THE CITY shows Adams, the Brooklyn borough president, named as a co-owner of the apartment at 425 Prospect Place within the last six months.

Adams’ only documentation of the transfer is a photo of a one-page, unnotarized letter his campaign recently provided to THE CITY in which he writes that he agrees to “assign” his shares of the unit to the friend, Sylvia Cowan.

The letter, dated Feb. 9, 2007, also says that Adams is assigning the shares “without asking for any payment” — but the only signature on the letter is his.

Adams has never reported his ownership of the unit on financial disclosure forms filed as a state senator or as borough president.

When THE CITY asked questions about the alleged transfer on Thursday, Adams faulted the friend, Sylvia Cowan, for failing to notify the co-op board of their arrangement — an indication that he believed the transfer had gone through at the time.

“It’s her responsibility,” he said.

But if that was his understanding, he would have needed to provide the IRS with a required gift tax for his share of the property, which in 2007 would have been valued at roughly $150,000, records suggest.

Neither he nor his campaign has answered THE CITY’s questions about or provided proof that Adams paid such a tax — nor have they explained what prompted the gift to Cowan, who has described herself and the Democratic candidate as “good friends.”

Adams continued to live at the apartment until 2013, six years after the alleged transfer, according to his campaign.

In a series of interviews, real estate agent Michael Corley told THE CITY he worked on a failed 2017 bid to sell the apartment for Cowan, and that Adams played a significant role in the broken deal.

Corley said Cowan, whom he knew from a local dog park, approached him early in 2017 to ask if he’d help her sell the cozy one-bedroom apartment on a tree-lined block near Grand Army Plaza.

He said he first learned of Adams’ link with the property when he asked Cowan for a shareholder agreement and co-op statements from that year — and saw the borough president named as co-owner.

Corley said he told Cowan that Adams would also need to sign a listing agreement, but that Cowan told him Adams was on board with whatever she decided.

It wasn’t until Corley and his wife went to list the unit for sale — after months of showing Cowan apartments she could purchase in Brooklyn and Long Island City — that they discovered the unit had already been listed online by another broker, Marjorie Thompson at Washington Realty.

Reached by phone on Friday, Thompson said she did work with that unit for “a lady,” but not for Adams.

Corley said when he confronted Cowan about the competitor’s listing, she told him that Adams wasn’t fully supportive of her selling the apartment, and that Adams also advised her that she could get more for her money by purchasing a place in Fort Lee.

Notes that Corley says he kept contemporaneously in a file on the attempted sale, which he provided to THE CITY, mention many of those same details.

“Spoke with Sylvia Cowan Saturday 6/17/17 and she informed me that she will be looking in New Jersey for a condo to buy with all the amenities she desires,” reads one entry dated June 18, 2017.

“In addition, she went on to inform me that Eric Adams (Borough President of Brooklyn), who she co-owns the 1BR coop at unit 1k 425 Prospect Place, was not in agreement to sell as she led us to believe when she retained us for marketing and brokerage services.”

The same entry says Cowan told Corley that she would be meeting with Adams the next day “to learn if they can move forward in the sale of the coop with us as their broker.”

Records show that within months, Cowan purchased a unit at a luxury building on Palisades Avenue in Fort Lee, one floor down from the apartment that Adams purchased in 2016 with his girlfriend, Tracey Collins.

There have been no public records about a sale of the unit at 425 Prospect Place since the 2017 attempt.

Asked about the claims of Adams’ role in Cowan’s bid to sell the unit and in her move to New Jersey, Evan Thies, an Adams campaign spokesperson, responded simply: “Not true.”

Thies didn’t provide a comment on the 2021 ownership document reviewed by THE CITY.

Earlier in the week, Cowan sent a text message to THE CITY in response to questions about the Prospect Heights co-op, where she currently serves as board president.

The message, written in all caps, said, “I AM NOT INTERESTED IN SPEAKING TO THE MEDIA.”

Board Notified in May

Co-op owners are required to notify their co-op board of any change of ownership. In a statement Adams’ campaign provided THE CITY, Cowan admitted that she did not notify the board at the time of the alleged transfer of shares.

Instead she says she “just recently updated the co-op board at the building about the apartment’s ownership status.”

The co-op board has to approve the new arrangement, and issue an updated share certificate reflecting the new ownership. Cowan first notified the board of her desire to transfer the shares from Adams to her on May 28, according to a source.

The New York Times reported she sent an email that day naming a person who could “represent the Board, Eric and me for the transaction.”

That means that for years after Adams claims he gave up his stake in the unit at least through that date, the formal record continued to reflect him as a co-owner.

To date Adams has never disclosed his ownership in the unit on any of his financial disclosure statements, starting before the alleged transfer of shares in 2005 when he was a state Senate candidate and 2006 when he was elected to the Legislature.

The non-disclosure continued each year he was in the Senate, then when he was elected as Brooklyn borough president in 2013 and re-elected in 2017.

Even after allegedly ditching his share in the apartment, Adams continued to live there until 2013, when he moved to an apartment in Crown Heights on McKeever Place, according to Thies.

In 2017, Adams moved into the bottom floor of a four-family townhouse he owns in Bedford-Stuyvesant, the campaign said.

The Lafayette Avenue home is the one Adams recently invited reporters into after a Politico raised questions about whether he lived in the Fort Lee apartment.

Adams’ campaign said that income was offset by renovations and other expenses. But he didn’t fill out a required tax form that would have spelled out his gains and losses on the property in each of those years. His campaign has said he plans to amend the filings, but hasn’t provided proof that he’s done so.

The Prospect Heights one-bedroom has also been sublet for portions of the last three years. After a Harlem rally and news conference during which Adams said he would no longer talk about the property, THE CITY asked Adams whether he had ever received any rental income from that apartment.