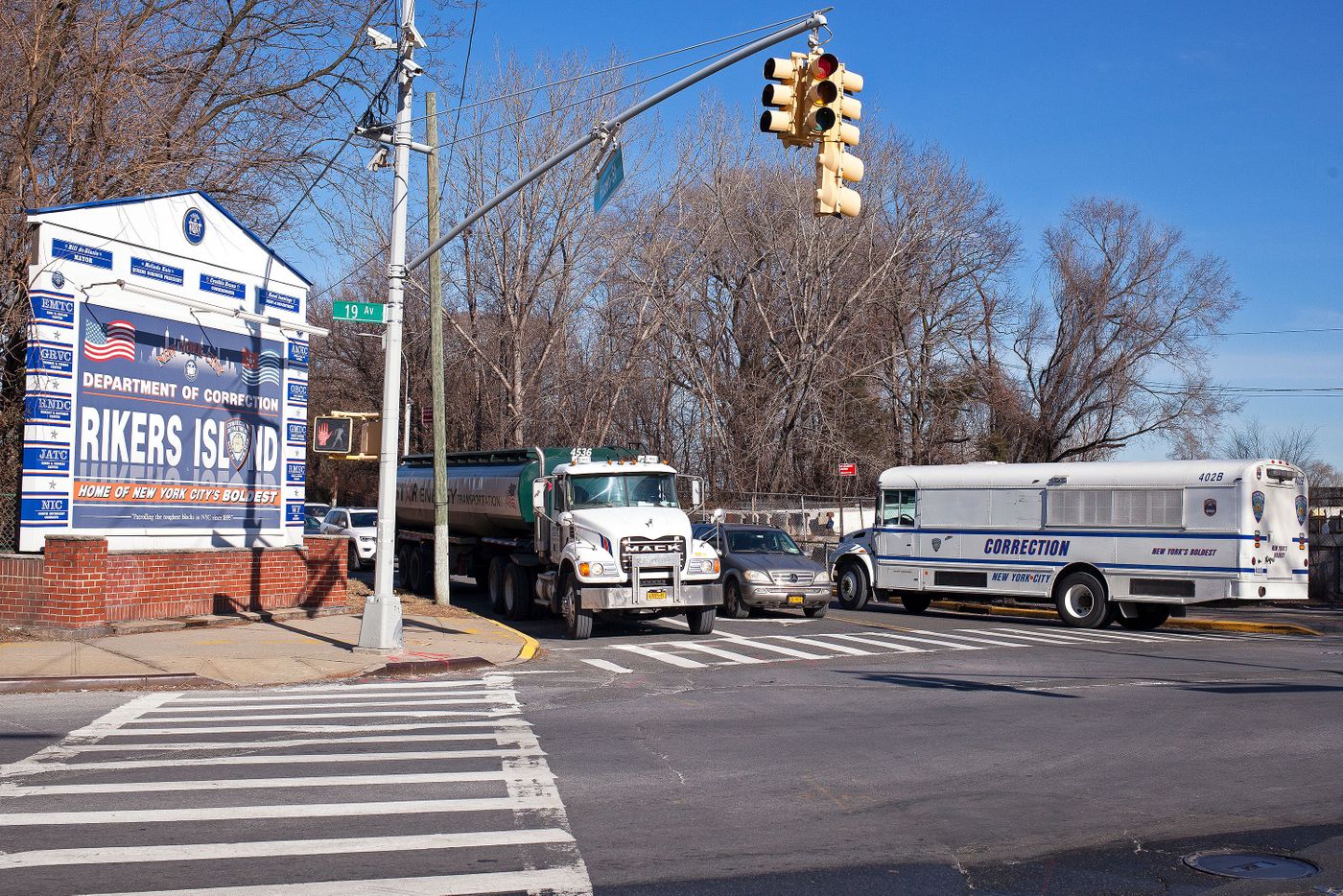 In the final year of the de Blasio administration, it’s full steam ahead for the $8.2 billion plan to build four new “borough-based” jails — with hopes of closing the notorious Rikers Island complex.

But on the campaign trail, some of those vying for the top spot at City Hall have been hedging their bets on the lockup blueprint.

Few candidates have given full-throated support to Mayor Bill de Blaisio’s vision of the so-called Lippman plan, which calls for new jails to be built in The Bronx, Brooklyn, Manhattan and Queens over the next seven years.

That’s worrying advocates who pushed de Blasio for years to commit to the plan they hope will lead to the full closure of Rikers Island’s complex of nine jails.

“This Rikers thing is not done. It’s not over or behind us,” said Brandon Holmes of Freedom Agenda, a decarceration group that has pushed to see the jail plan through and will co-host a virtual event about the island’s future with four mayoral candidates on Tuesday night. “They’re just giving lip service.”

Reform advocates have long targeted Rikers for closure because of the nearly 90-year-old jail complex’s well-documented culture of violence, neglect and pattern of civil rights violations, they’ve said. Jail reformers also note that inmates get woken up as early as 3 a.m. so they can make it in time to court hearings throughout the city from the East River island.

Rikers is also difficult to visit for family and friends of people behind bars, advocates say.

In 2017, the then newly convened Independent Commission on New York City Criminal Justice and Incarceration Reform recommended shuttering Rikers in a report that laid out a road map of building smaller replacement jails in the boroughs. The de Blasio administration largely adopted that vision in its August 2018 plan.

But now, even candidates who have said they support the plan on the table have sown doubt, raised questions or voiced concerns about the project while on the stump.

But at an April 27 mayoral forum hosted by the Asian American Federation, they all wavered when asked about one of the four jail sites: a plan to demolish and replace the Manhattan Detention Complex, also known as The Tombs, on White Street in Chinatown.

“I do not support building a jail there,” Adams said at the virtual forum. “I would stop the project,” Donovan said. Garcia said she’d look “at whether or not we need new jails in every community” and would take a look at “the size of these structures.”

“Rikers has to close. It’s a human rights violation. But I am not going to open new jails. I’m going to focus on alternatives to incarceration,” she said — a statement at odds with a comment she made on a podcast a month earlier in which she said she “supports the plan.”

Comptroller Scott Stringer, whose candidacy has been rocked by sexual misconduct allegations, said he “does not support the mayor’s jails plan.” Ray McGuire said, “I do not support building four new jails.” And Andrew Yang said he’d want to “reexamine the four borough jail project, really, from A to Z.”

“I’ve met many New Yorkers who did not feel not properly included in that plan. Circumstances have changed,” he said, adding: “I do think that we should be moving to close Rikers as soon as possible, but we need a better plan that more community members are on board with.”

Dianne Morales, who did not attend the AAF event, has called for “no new jails” and describes herself as a prison abolitionist.

That kind of talk is worrying to Soffiyah Elijah, executive director of the Alliance of Families for Justice, an advocacy group for people with incarcerated loved ones. She warned of candidates “playing political football with the people whose lives are most impacted”

“If the candidates are not committed to building off of that plan, we’re going to find ourselves back at square one, and the amount of time and political good will to get to where we are now will completely go down the drain,” she said. “That will result in New Yorkers remaining in horrific places like Rikers and The Tombs.”

Closing Rikers Island’s jails has become a common refrain among progressive politicians in New York, and all of the major Democratic mayoral candidates have said they support the concept of doing so.

But taking that idea mainstream took an extraordinary amount of effort “led by people who have been incarcerated on Rikers and their families,” said Tyler Nims, the executive director of the Independent Commission on NYC Criminal Justice — led by former chief judge of the State of New York Jonathan Lippman — that authored the 2017 report on Rikers.

“I think abandoning or walking back from this is not something that New Yorkers are prepared to see their mayor do,” he said.

De Blasio himself was “pushed to do this project,” Nims said, by those people affected most by incarceration as well as by the City Council, its then-Speaker Melissa Mark-Viverito, the Commission and “a groundswell of advocacy from across the board.”

To begin the process to build the four new jails, City Hall conducted a contentious and months-long public review process marked by heated hearings, meetings and protests, culminating in a 36-13 Council vote in late 2019.

It was a “difficult vote,” Holmes recalled, which he believes has given cover to the candidates to talk about only the critiques of the plan, not the solutions for how to make it happen.

“If you’re a candidate saying that you believe in closing Rikers, then you have to show us how you understand or identify with the issues surrounding it,” he said.

Meanwhile, the COVID-19 pandemic has caused a few bumps in the road for the four-jail plan and its timeline, THE CITY has reported previously. And neighbors of proposed facilities in Mott Haven and Chinatown are planning to continue legal battles challenging the new construction, they said.

But, overall, the plan is moving along in preparation for the next mayor to take over the project.

According to Ian Michaels, spokesperson for the city’s Department of Design and Construction, companies hired by the city to dismantle the existing jails will be chosen this summer and demolition is slated to begin in early 2022.

The city expects that the firms that will design and construct the new jails will be chosen before de Blasio leaves office — but possibly after the November general election.

“We have made significant progress on procurements for all four sites of the BBJ [borough-based jails] project and will have teams in place by the end of the year. From there, we are confident that design and buildout can continue on the timeline the city has mapped out, with full completion anticipated by 2027,” Michaels said.

But the next mayor will have full agency to put the plan in reverse, or steer it in another direction through the project contracts and the city’s capital budget allocations.

The next mayor will also hold enormous sway over the tenor and culture of the hundreds of officers who will operate city jails, on Rikers or off, in his or her choice for commissioner of the Department of Correction.

“When it comes to politics, you can hold things up or speed things up as you care to,” said Elijah.

Arline Parks hopes the next mayor pumps the brakes on the plan from day one.

Parks is a lifelong resident of Mott Haven in The Bronx and a neighbor of one of the four new jail sites, slated to be built on an NYPD tow pound on East 141st Street. That’s just down the block from her complex, the Diego Beekman Mutual Housing Association.

Diego Beekman had brought a lawsuit that was dismissed by a state Supreme Court judge on March 26, court records show, but is planning an appeal. The group has met with Garcia and Yang, and plans to meet with Adams to make their case that a jail going up in an area already plagued with “quality of life” issues — Parks said drug sales and shootings are common — is not the right move. But getting any firm commitment on the issue has been tough.

“I don’t think any of the candidates, for obvious reasons, are taking a stance that we would like them to take — because they’re trying to get elected,” she said.

She wants any new jail sited away from her neighborhood — or, better yet, revisit the close-Rikers concept altogether.

At least two candidates in the race have said that’s how they’re thinking about the jail issue. The only two Republicans on the ballot in the June 22 primary — Fernando Mateo and Curtis Sliwa — both told THE CITY they would reevaluate the need to close Rikers at all.

Michael Skelly, a spokesperson for the Correction Officers’ Benevolent Association, called the borough jail plan “completely disingenuous.” It doesn’t address the serious issues that plague Rikers today — including assaults on officers, violence between inmates, mismanagement and staffing shortages, he added.

“We don’t need the next mayor to come in and pretend that closing Rikers, or waiting to close Rikers, is going to better the lives of anyone who’s suffering now,” he said.

Still, those who have worked hard to build a road map to closing the jails on the island — a goal of reformers that stretches back for decades — have urged the slate of Democratic candidates to stay the course.

“It’s definitely going to require commitment and political will, but the payoff for the city, and for the legacy of the next mayor, is going to be immense,” said Nims.

This article was originally posted on No New Jails? Next Mayor Could Scrap de Blasio’s Close-Rikers Plan