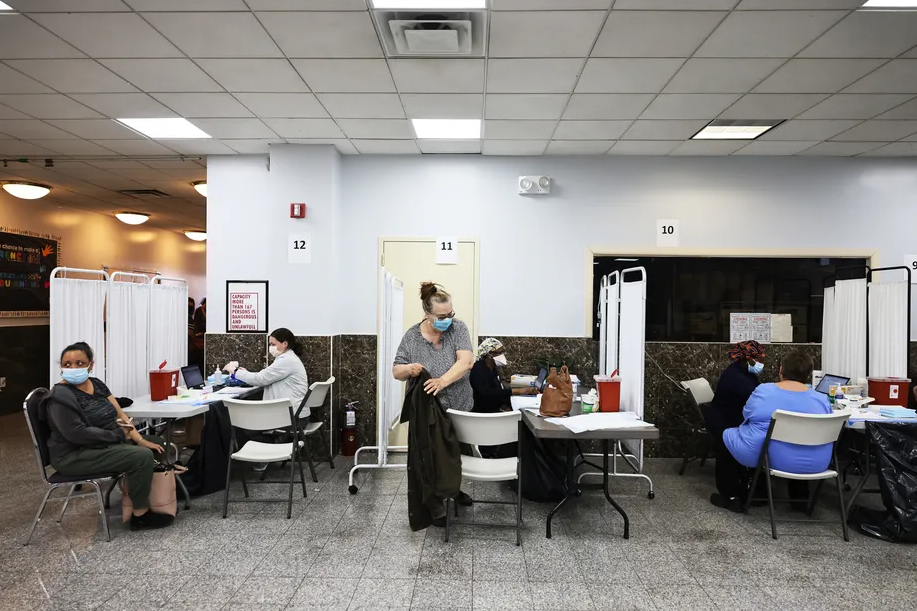 New York City teachers will be required to be vaccinated by the time school reopens in September, or be tested weekly, Mayor Bill de Blasio announced Monday.

The city is grappling with rising infections due to the delta variant, stalling vaccination rates, and a rapidly closing window of time to get teachers and eligible students vaccinated against COVID before classes are set to resume fully in-person on Sept. 13.

The mandate applies to all city workers, placing New York City at the forefront among large American cities. It comes on the heels of ramped up efforts to get young people vaccinated at summer school sites, and to encourage more adults to get their shot. Last week, city officials issued a similar directive that staff must be vaccinated or tested regularly at city-run hospitals and health clinics.

The push to boost vaccination rates comes as de Blasio has promised to reopen schools in the fall only for in-person instruction, with no option to learn remotely. At the same time, the more transmissible delta variant is spreading quickly, largely among the unvaccinated, threatening to cause major disruptions to the third school year in a row. As of Sunday, there were 127 classroom closures out of 13,000 across summer school sites, city data show.

There isn’t much time to get more eligible students and staff vaccinated, which health officials say is the best way to beat back the virus. There are just seven weeks before the first day of school — leaving less than two weeks of wiggle room for students and school staff to get their first dose of a two-dose shot and be fully vaccinated by the first day of school. The single-dose Johnson & Johnson/Janssen vaccine only requires two weeks to be considered fully vaccinated.

City officials did not say whether staff who aren’t fully vaccinated by the return to classes will have to submit negative coronavirus tests.

“In the tug of war between vaccines and the variants, we should continue to bet on vaccines, but now is the time for our whole city to pull together to defeat delta,” said Dave Chokshi, commissioner of the city’s health department.  “We need stronger medicine to deal with delta, which is why we’re taking these steps today, and we’ll continue with robust responses if more steps are needed.”

So far, about 60% of education department employees have had at least one dose of the vaccine, which the mayor said is a “strong suit” among city agencies. That figure does not include those who live or were vaccinated outside of the five boroughs, according to city officials. About 70% of New York City adults have received at least one shot.

Officials could not immediately say whether teachers in city-contracted but privately run preschools — which serve a majority of students enrolled in the city’s free programs for 3- and 4-year-olds — must follow the new vaccination and testing rules.

Implementing the vaccinate-or-test requirement will likely be complicated for schools. Officials  did not share details such as who will be responsible for ensuring school staff comply with the mandate or how it will be tracked, and whether teachers will be able to receive COVID tests at their school sites. A spokesperson for the union representing principals and other school administrators said there had been “no guidance yet.”

This past fall, schools were responsible for making sure students and staff submitted regular health checks. But that was a universal requirement. Tracking who is vaccinated and who has submitted proof of test results adds a layer of logistics and could thrust school leaders into difficult situations.

“The data tracking and monitoring of that kind of requirement is really a labor intensive process,” said Dr. Susan E. Hassig, an associate professor of epidemiology at the Tulane School of Public Health and Tropical Medicine. “I think the challenge is what happens when somebody shows up without a test result for that week, and what are they going to do about it?”

Throughout last school year and into this fall, school staff have submitted to regular coronavirus testing. Those tests, however, only included a random share of people on campus. Amber D’Souza, a professor of epidemiology at the Johns Hopkins Bloomberg School of Public Health, said that requiring weekly tests from every unvaccinated staffer is “reasonable.”

“What that does is it will detect someone who is positive before they’ve had a chance to spread it to many other people and before there are large outbreaks,” she said.

D’Souza added that “vaccination is the safest strategy.” But many school districts have been reluctant to require it and are instead trying carrot-and-stick approaches. Similar to New York City, officials in Detroit announced Monday that unvaccinated school staff would be required to submit proof of coronavirus tests weekly. In Colorado, the Aurora school district plans to require vaccines — but not until full FDA approval is given. The vaccines in use in the U.S. have been given emergency authorization.

D’Souza said that waiting for a final sign-off by the FDA could help assuage worries from people who have been hesitant to receive the vaccine, but that a decision to require them “shouldn’t need to rely on that step.”

“That’s really more of a political than a science-based decision,” she said. “The robust evidence available on the vaccine and the years of scientific investment and advancement that went into the technologies that were able to be used in the vaccines have been well vetted and reviewed in a scientific process.”

The teachers union had previously signaled its reluctance for a hard mandate. On Monday, the United Federation of Teachers seemed to endorse the city’s plan.

“Vaccination and testing have helped keep schools among the safest places in the city,” the United Federation of Teachers said in a statement. “This approach puts the emphasis on vaccination but still allows for personal choice and provides additional safeguards through regular testing.”

Mark Cannizzaro, head of the union that represents principals and other school administrators, said in an interview with Chalkbeat that requiring vaccinations or regular testing for city employees “sounds reasonable.”

While much remains up in the air regarding the upcoming school year, the education department has so far decided to stick with mask requirements for students and staff. There will also be two air purifiers in every classroom to improve ventilation, something that public health experts have said is important in curbing the spread of the virus.