Please ensure Javascript is enabled for purposes of website accessibility Opposition digs in against LGBTQ bills, with Gianforte in the wings - Mid Year Media Review
Skip to content 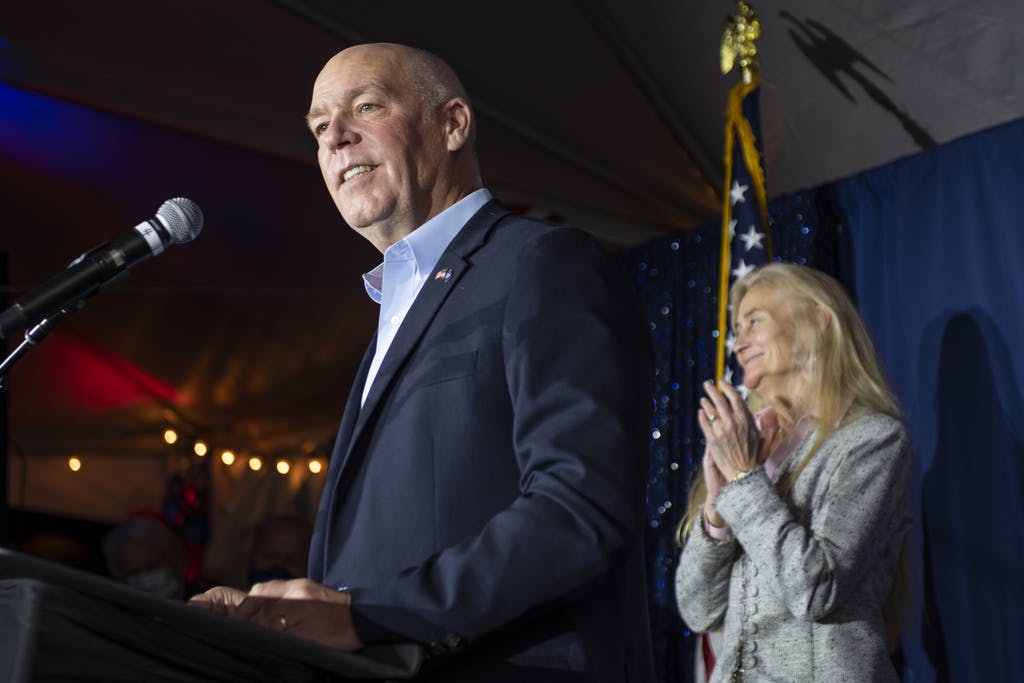 $350 million in federal funding for public schools and universities. A chilling effect on Montana’s growing tech and business sectors. A difficult climate for recruiting and retaining medical professionals. The risks of a worsening mental health crisis and climbing suicide rates.

Those are the alarms being sounded by a growing coalition speaking out against the slate of bills under consideration by lawmakers that would adversely affect LGBTQ Montanans, specifically transgender youth. As the bills advance through the Republican-controlled Legislature, pushed by some of its most socially conservative members, advocates for LGBTQ Montanans and a range of allies are ramping up a focused opposition. Their urgency is aimed at defeating the bills in consequential hearings on the House and Senate floor. The last option, advocates say, would be lobbying for vetoes from Gov. Greg Gianforte, Montana’s first Republican governor in 16 years.

The growing opposition to the bills, including one that would ban transgender women and girls from participating on women’s interscholastic sports teams, was on display Wednesday in a marathon hearing before the Senate Judiciary Committee. The consequences of the “Save Women’s Sports Act,” opponents argued, are high.

“Kids are fragile. They need care and encouragement and validation,” said Sam Duncan, a Missoula resident who is transgender. “… Legislation like HB 112 is one note in the cacophony that tells trans kids they do not belong.”

A total of eight bill proponents, including the conservative Christian groups Montana Family Foundation and Alliance Defending Freedom, spoke in favor of House Bill 112 during a two-hour hearing, voicing concerns about potentially unfair competition between cisgender and transgender athletes that they said would undermine the achievements of federal Title IX legislation, which allows equal participation for women in sports.

“Girls should compete against girls and boys should compete against boys,” said Jeff Laszloffy, head of the Montana Family Foundation. “… Shouldn’t female athletes be treated fairly at all levels of competition? The fact is, that’s what this bill is all about. It’s about maintaining the gains that have been made since Title IX was passed in 1972. It’s that simple.”

After hearing from dozens of Montana students, union representatives, medical associations and businesses that the rewards of allowing transgender girls to play sports with their female peers vastly outweigh the possibility of putting cisgender athletes at a disadvantage, lawmakers on the committee voted along party lines Thursday to pass HB 112, sponsored by Rep. John Fuller, R-Kalispell, with seven Republicans supporting the measure and four Democrats opposed.

The committee also voted to pass House Bill 427, also sponsored by Fuller, which bars physicians from providing or referring gender-affirming surgeries to minors and echoes a more restrictive measure, House Bill 113, that failed to pass the House in January. The narrowed proposal, proponents say, will protect minors from pursuing medical treatments they may regret later in life. For transgender and nonbinary teens experiencing urgent and persistent gender dysphoria, opponents argue, these rare and carefully considered treatments can be life-saving.

Both bills now advance to hearings before the full Senate. Opponents have made clear that the fight to stop them is not about to let up anytime soon.

Based on the official count recorded by legislative staffers, the public comments lawmakers have received about HB 112, HB 113, and HB 427 have been overwhelmingly opposed to the proposals. 1,984 messages have asked legislators to oppose the athletics ban, while 611 have favored it. More than 2,000 calls and messages have come in against the bills restricting medical treatment for transgender and nonbinary youth, while just over 500 have asked lawmakers to support them.

Unease and concern about the measures extends to many business sectors and industries in Montana, including tech companies working to expand their professional market in the Treasure State.

In February, the Montana High Tech Business Alliance, at the request of some of its members, compiled a web page with information about how HB 112 and other “anti-LGBTQ+ bills could be harmful to our industry.” While MHTBA, founded by Gianforte in 2014 before he first ran for office, does not take part in formal lobbying efforts, the information was emailed to the group’s approximately 200 members, including the governor. A spokeswoman for the alliance declined to comment on whether there has been additional correspondence with Gianforte about the legislation.

As its report states, bills that would negatively impact LGBTQ people “may lead to lost business, lost jobs, slower growth, and damage to Montana’s reputation as a safe and welcoming place to work.” The state’s tech sector, MHTBA explained, competes for a global roster of clients and potential employees, and is consequently held to industry standards that trend toward explicit support and protections for LGBTQ employees.

“As bills like HB 112 make their way through the Montana legislature, local tech executives are receiving clear messages that the nation is watching,” MHTBA wrote. “Tech leaders have been working for years to attract high-paying jobs, new business, facilities, investments, corporate events, sponsorships, and educational partnerships into Montana. These could be jeopardized if the state does not uphold these emerging, but rapidly accepted corporate standards of non-discrimination.”

Other businesses have come forward in recent weeks to try to convince lawmakers that the bills would negatively impact their professions. Members of the medical community have made plain that the proposed bans on athletic participation and medical treatment conflict with professional standards of care for youth with gender dysphoria.

The Montana Chapter of the American Academy of Pediatrics and several other medical organizations registered their opposition to HB 112 and HB 427 on Wednesday, including the Montana Nurses Association, the Montana American College of Emergency Physicians, Billings Clinic, Bozeman Health, Shodair Children’s Hospital and the Montana Psychiatric Association.

In testimony to lawmakers Wednesday, Jean Branscum, CEO of the Montana Medical Association, said health care providers are concerned that HB 427 infringes on the communication, treatment and referral process between a doctor and a patient.

“This is a very sacred relationship, and this kind of interference can really prevent having necessary care being provided to that particular patient,” Branscum said, adding that the ban on referrals could have a particularly negative effect on psychiatrists and mental health care professionals working with young clients.

“Please don’t criminalize the practice of medicine,” Branscum said. “We have a workplace shortage. This sends the wrong message to other practicing physicians who may want to settle and provide important care across our state.”

“The concern that MTAPA has here is that when physician assistants are even referring for beginning [gender affirming treatment] or even having that conversation, that they are on the hook,” St. Lawrence said, referencing the bill text. “These claims may be asserted both by a minor, a parent, or a next-of-friend. So a next-of-friend, whoever that is, of a minor, may assert a threatened violation by a health care provider … That’s a pretty broad and open ability to make a claim.”

Ill-defined liability, in addition to conflict with state and federal statutes, was also referenced by the Montana University System and one of Montana’s most powerful unions, the Montana Federation of Public Employees, which represents many public school teachers and employees. Both organizations have said the ban on transgender women and girls participating on women’s sports teams creates a tangle of questions about enforcement and raises the possibility of lawsuits against coaches, school districts and universities.

“MFPE’s members have a diverse range of views on this topic in general. We are united, however, in our concern for school funding and for school liability,” said MFPE President Amanda Curtis, who testified against HB 112. “I have no doubt that every single person in this room right now and watching cares deeply about the students of Montana and about athletics. But if we look at this from a legal and funding perspective, this bill is an encroachment on the local control of school boards to take care of their own business and their own community in the way they see fit.”

For Montana’s public universities, the cost of complying with HB 112 could total in the hundreds of millions of dollars. President Joe Biden recently signed an executive order prohibiting discrimination on the basis of gender identity or sexual orientation, a move that could jeaopardize roughly $350 million in federal funding for Montana’s public universities, according to Ali Bovingdon, chief legal counsel for the Montana University System, in a recent presentation to the Board of Regents.

Proponents of the athletics ban pushed back Wednesday by questioning the enforceability of Biden’s order, saying the issue is likely to go to the courts for a ruling on the application of Title IX and equal protection statutes.

“Title IX and its implementing regulations specifically allow states, recipient schools of federal funds, to operate or sponsor separate teams for members of each sex,” said Matthew Sharp, an attorney representing the Alliance Defending Freedom. “That’s exactly what this bill does. It maintains separate teams, specifically female teams for biological females,” he continued, arguing that schools would have funding removed only if the Biden administration is victorious after a long legal battle.

This article was originally posted on Opposition digs in against LGBTQ bills, with Gianforte in the wings