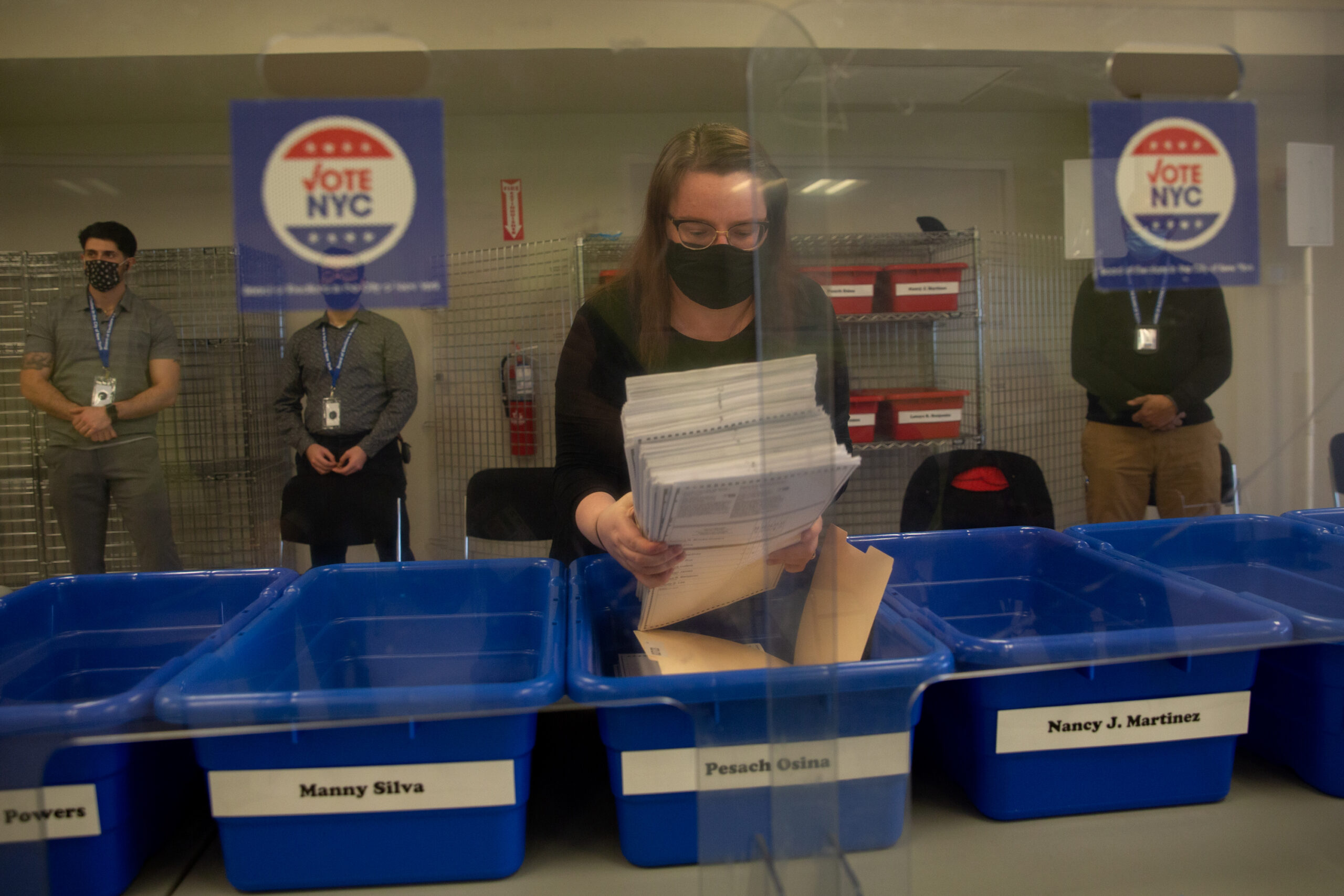 The city Board of Elections on Tuesday began manually counting ballots in a southeast Queens special election — with big questions still unanswered about how voters’ selections will be tallied and disclosed under New York’s new ranked-choice system.

With ranking software yet to be authorized by the state, the start of adding up some 7,400 ballots cast for the City Council seat formerly held by Borough President Donovan Richards for the first round of ranking took all day.

Under ranked choice voting, launched this year, voters can list up to five candidates in order of preference. About 95,000 voters were eligible to cast ballots in the district, which covers parts of Southeast Queens and the Rockaways.

Staffers wearing masks, seated side by side at the Board of Elections facility in Middle Village, sifted through heaps of ballots stuffed into manila folders.

The process ran down an assembly line: One table counted all the ballots in the race. At  another table, staffers read out the first-choice name on each ballot, then tallied those numbers, and placed them into piles for each candidate.

Then workers heaped those first-choice ballots into blue boxes labeled with each of the nine candidates’ names.

And repeated for about seven hours to conclude the first round.

If no one candidate receives at least 50% of the vote necessary for victory, the ballots from the box that ends up with the fewest votes will then get redistributed to the No. 2 choice on each list — a process that continues until one candidate gets over the threshold.

On the special election day three weeks ago, Selvena Brooks-Powers closed out the evening with a slim lead — but not a majority — of first-choice in person votes.

Her lead increased from 207 votes to roughly 350 first-choice selections with the opening of some 500 absentee and affidavits ballots since then, according to a campaign source.

Round two of counting begins Wednesday. It may be another day or two until final rankings are known and a winner emerges.

The winner will serve out Richards’ term, which ends in December 2021. They’ll need to run again in the June primary and November general election in order to secure a new term.

The laborious paper sorting and re-sorting became necessary because the state Board of Elections still has not approved the software — even though in late January it committed to working with the city to come up with a plan, Gothamist reported.

The state board has since indicated speedy software will be approved in time for the June primaries, said Susan Lerner of the government watchdog group Common Cause. But the manual hand count will still be in place for two upcoming Bronx special elections on March 23, despite the city Board of Elections requesting software authorization as early as December.

“The reason why we are screwed up here, it’s because the state board dragged its feet,” Lerner said. “This is not going to be the case for June.”

Also still unknown is how the Board of Elections will present ranked-choice ballot counts to the public — especially in the scenario in which one candidate gets 50% of votes right away, without a ranked-choice tally.

In the first ranked-choice special Council election, held January in Queens’ 24th district, James Gennaro won outright on the first round of ballot counting — and the board has not disclosed how voters ranked candidates.

Common Cause New York and other groups have called on the board to release the full record of votes cast. That would allow candidates and others to analyze votes and conduct preliminary ranking tabulations prior to the board’s official certification.

The city Board of Elections did not respond to a request for comment.

Assemblymember Daniel Rosenthal (D-Queens) last week introduced a bill that would mandate the Board of Elections disclose complete ranking tabulations regardless of outcome — even if a candidate won more than 50% of the vote. Rosenthal said in a release that it is “vital to maintaining the trust and transparency of ranked choice voting that the full data be released to the public.”

As the manual count in Middle Village went into its fourth hour, fatigue started to set in and the number of onlookers thinned. Pesarch Osina, the sole candidate present, kept a close eye over the process and the pile of about 60 ballots where voters had mistakenly cast multiple votes for the same ranking slot.

Ballot scanners are supposed to reject these but didn’t catch all of them, according to observers. cam

Osina campaign manager Michael Lambert said his candidate could still have a “pathway to victory” thanks to ranked choice.

“That’s what we are holding out for,” he said, adding that the gap in votes between Brooks-Powers and Osina was an encouraging sign of support from the community for Osina.

This article was originally posted on Queens Ranked-Choice Vote Count Slogs in Special Election, With Key Decisions Yet to Come in High-Stakes Year