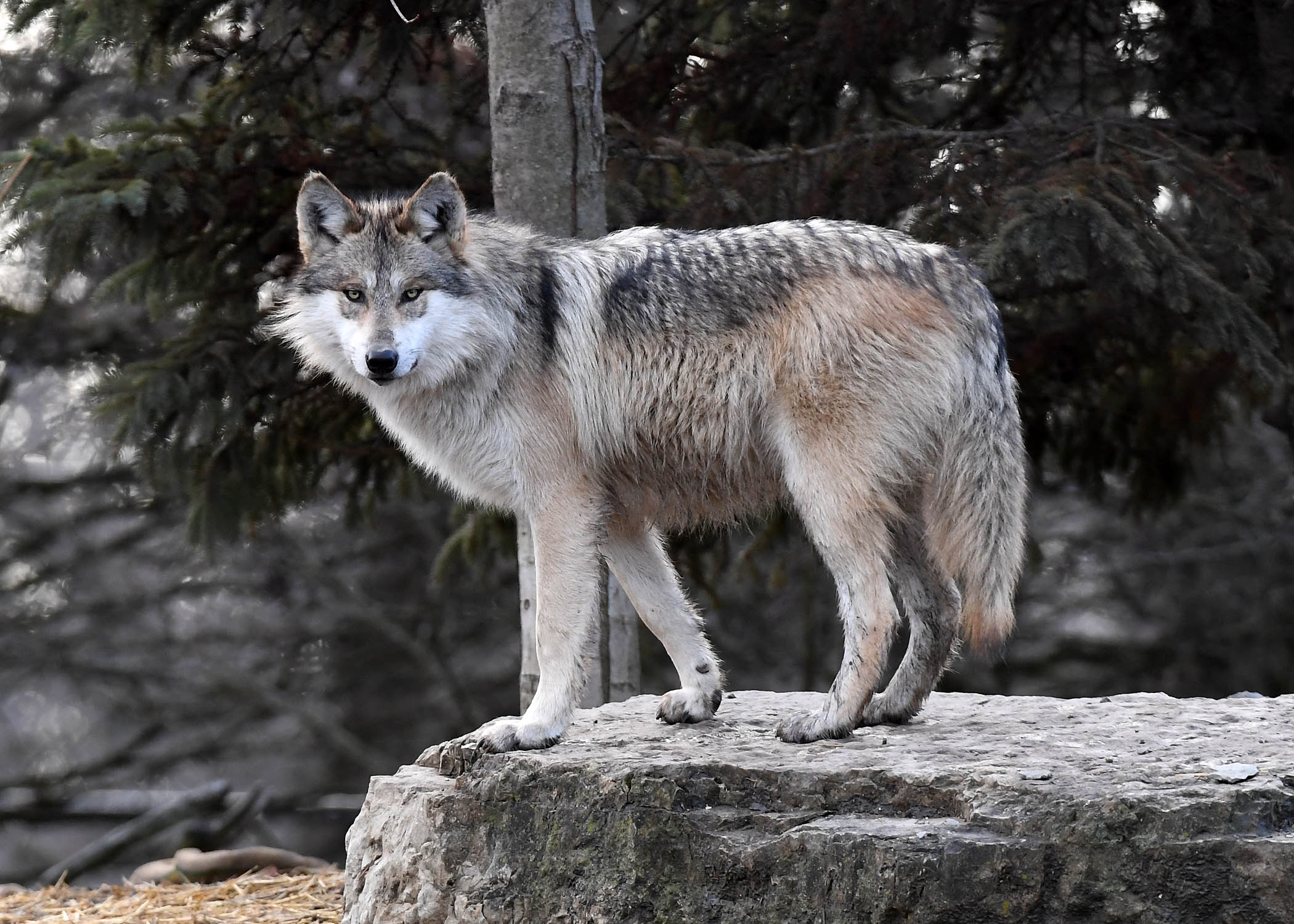 The Montana Legislature is debating aggressive measures to reduce the state’s wolf population, marking an inflection point in the state’s management of wolves, which has become a lightning rod for rhetoric.

This week the House Fish, Wildlife and Parks Committee heard testimony on two bills that passed out of the Senate earlier this monthwith near-unanimous Republican support. Senate Bill 267 would allow for the“reimbursement for receipts of costs incurred relating to the hunting or trapping of wolves.” Another measure, Senate Bill 314, would remove bag limits, authorize hunting with bait and legalize nighttime wolf hunting (a practice known as spotlighting) on private land.

Opponents of the proposals characterize them as a “war on wildlife” and “an open season on wolves” that undercuts the state’s reputation as a responsible steward of its wildlife. They say SB 267 crosses an ethical line by commercializing Montana’s wildlife and runs contrary to fair-chase hunting principles. Proponents say there are too many wolves in the state, western Montana in particular, and that the predators are wreaking havoc on ungulate populations and livestock operations. They say the Legislature is right to advance these proposals because the state FWP’s Fish and Wildlife Commission has been unresponsive to calls for more aggressive wolf management.

Sen. Bob Brown, R-Thompson Falls, is sponsoring SB 267 and 314. He said he’s not a wolf trapper himself, but that he’s bringing the bills on behalf of sportsmen like him who are frustrated by diminishing elk hunting opportunities in western Montana. He said one meeting about wolf-related problems in the tiny town of Trout Creek drew 200 people, and a similar gathering in Kalispell was attended by 600 people. Despite such strong interest, the Fish and Wildlife Commission has done nothing to alleviate their concerns, Brown said.

“Many people that I represent have felt for a long time that they [have] no voice,” Brown said. “We can’t sit by and allow our game — the thing that feeds so many families — be taken off the table.”

Bill opponent Derek Goldman with the Endangered Species Coalition countered that FWP data indicates that the vast majority of hunting districts in the state are at or above population targets, and that Brown’s proposals are not based on evidence.

“There are only about 19 out of 141 elk-hunting districts in the entire state that are below management objectives, including Region 1,” Goldman said, referring to the northwesternmost of FWP’s seven districts. “To me, a lot of this is based on wolf persecution rather than reality.”

Brown sponsored similar bills in 2019 when he served in the House of Representatives. One of those measures sought to legalize wolf hunting at night on private land; the other would have authorized reimbursement for trapping (but not hunting) expenses. The former didn’t make it out of the House, and the latter passed through the House before stalling in the Senate.

This year, Brown’s proposals are broader and have more apparent support from lawmakers. Despite considerable public opposition to both measures — as of March 17, Legislative Services had tallied 54 comments in favor of SB 267 and 408 opposed to it — GOP lawmakers have remained steadfast in their support of the bills.

Five Republican legislators who didn’t support Brown’s reimbursement proposal two years ago do now. Just one Senate Republican flipped their vote the other way during second reading in the Senate, going from a yes in 2019 to a no in 2021. That legislator, Miles City’s Kenneth Bogner, is the only GOP senator to vote against SB 267 this session.

One might assume that interest in more aggressive wolf management mirrors an increase in the wolf population, but that’s not the case. According to one estimate generated by Montana Fish Wildlife & Parks, Montana’s wolf population peaked in 2011 at 1,254 wolves. Since then, it’s fluctuated between about 1,100 and 1,200. Another population estimate using a different model indicates that the population peaked in 2013 with 1,106 animals and is currently about 830.

What has increased is livestock predation by wolves, particularly predation of sheep. Between 2016 and 2020, the number of cattle losses due to wolf predation hovered between 55 and 60 annually. Sheep losses have increased by a significantly larger margin. The Montana Livestock Loss Board tallied 10 confirmedsheep losses to wolves in 2016. By 2018 that number more than doubled to 21. Wolves were responsible for 49 sheep losses last year, with just two counties — Beaverhead and Madison — sustaining nearly two-thirds of the state’s total losses.

Those numbers help explain the Montana Wool Growers Association’s support for Brown’s bills.Former association presidentDave McEwen told lawmakers last month that you could use “every gun and tool you own” to reduce wolf populations and the animal would persist.

“You don’t have to worry about them going anywhere — they’re still there,” he said in testimony before the Senate Fish and Game Committee.

During that meeting, FWP Chief of Staff Quentin Kujala, who was serving as an informational witness, wasasked if there’s room for additional wolf harvests in the state. He said he thought there was, that the resiliency of the animal’s population would permit more hunting and trapping.

The agency hasn’t taken a stance on Brown’s bills or two other bills that aim to reduce wolf populations. Paul Fielder, a Republican representative from Thompson Falls, is sponsoring House Bill 224, which would legalize the use of neck snares by licensed trappers. Fielder is also sponsoring House Bill 225, which would add two weeks to either end of the current wolf-trapping season and codify those dates into statute (currently they’re set by the Fish & Wildlife Commission, not written into law). If those bills garner a majority of votes before the Senate they will move to Gov. Greg Gianforte’s desk for consideration.

In a conversation with Montana Free Press last month, recently appointed FWP Director Henry “Hank” Worsech said he sees the agency as a purveyor of information and an enforcer of statute, but not necessarily a policy maker.

“A lot of that’s going to come from the Legislature,” he said. “We’re not policy-makers, really.”

One word opponents use in conversations about SB 267 that’s generally avoided by supportive lawmakers is “bounty.”

During last Tuesday’s hearing before the House Fish, Wildlife and Parks Committee, Fielder took issue with the use of the term in a bill opponent’s testimony, but Nick Gevock, the Montana Wildlife Federation’s conservation director, maintains the description is warranted.

“It’s payment for presentation of a dead body — and that’s a bounty,” he said.

Gevock said SB 267 sets bad precedent and flies in the face of best practices for wildlife management. He said it undermines the spirit of the North American Model of Wildlife Conservation, which has been integral to the United States’ success sustaining wild animals. Principles laid out in that model are clear about the use of scientific evidence in management decisions and the rejection of game markets.

Several opponents of the measure said they fear that although there’s no public funding attached to SB 267, it could be coming down the pike in future legislative sessions. They say it would be wrong to use public funding to kill wolves just because some constituents have deemed them an undesirable species.

During testimony this week, Goldman, with the Endangered Species Coalition, presented lawmakers with documents highlighting how board members of a nonprofit group in Idaho seeking to reduce wolf populations personally benefited from a publicly funded reimbursement program in Idaho.

According to those documents, the Foundation for Wildlife Management, which is supported by Idaho Fish and Game funding, paid several of its board members and their family members for wolf harvests. Justin Webb, one of those board members, testified at the Senate Fish and Game Committee’s hearing on SB 267 last month. Goldman said he’s concerned the group is looking to set up shop in Montana. Webb didn’t return MTFP’s request for comment.

“A program like this not only tosses aside Montana’s wildlife ethos, but it’s also unaccountable, self-serving and rife for abuse for the people that administer it,” Goldman said of the Foundation for Wildlife Management.

Others see Brown’s proposal — and the involvement of outside groups — as an opportunity for large landowners to manage livestock predation without pulling from the coffers of Wildlife Services, the U.S. Department of Agriculture-administered program that’s charged with eliminating conflicts between wildlife and livestock. Registering his support for the measure, Montana Outfitters and Guides Association Executive Director Mac Minard said reimbursement is an attractive proposal for some of his organization’s members, specifically ranchers who are experiencing problems with wolves and want help decreasing their numbers.

“The bottom line is [that] to put some people on the landscape that can get the job done takes some money,” he said.

Dan Vermillion, who served on the Montana Fish and Wildlife Commission from 2007 until 2019, told MTFP that he also thinks SB 267 is a bad idea for that very reason, because it “monetizes the sport, the tradition of hunting.”

“It’s somewhat of a natural reaction to a changing landscape, but I think it’s really a huge mistake when it comes to wolf management,” he said.

Much of Vermillion’s tenure on the Fish and Wildlife Commission included heated debate about wolf management. He said he was impressed by the conscientiousness, honesty and transparency of the biologists he worked with. But even with their expertise and dedication, he maintains that discussions about predator management are fraught because the decisions aren’t made based on data alone.

“When you get to values, that’s where it gets hard,” he said. “That was the hardest part of the job.”

The House Fish Wildlife and Parks Commission has yet to take executive action on Brown’s proposals.

This article was originally posted on ‘Reimbursement’ or ‘bounty’?