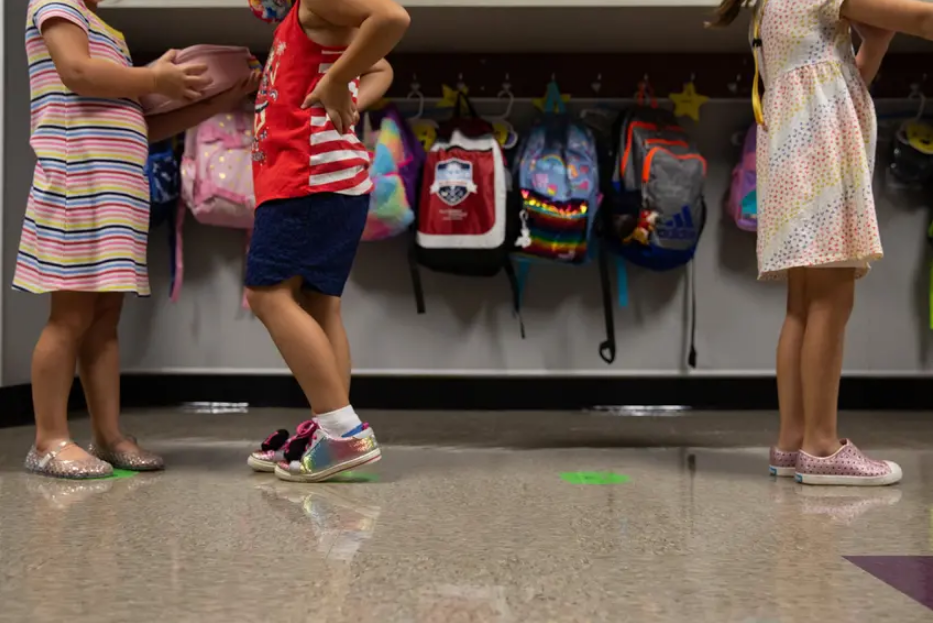 When Texas schools returned to in-person education last fall, the spread of the coronavirus “gradually but substantially accelerated,” leading to at least 43,000 additional cases and 800 additional deaths statewide, according to a study released Monday.

The study was done by University of Kentucky researchers for the nonpartisan National Bureau of Economic Research in Cambridge, Massachusetts, and tracked weekly average COVID-19 cases in the eight weeks before and eight weeks after the state’s school districts sent students back to school in the fall.

The researchers said the additional cases they tracked after students began returning to schools represented 12% of the state’s total cases during the eight weeks after reopening and 17% of deaths.

They analyzed three things: school district reopening plans in every county, COVID-19 cases and deaths, and cellphone data that showed how adult movement changed once a community’s children went back to in-person learning.

Researchers chose Texas because, by the fall term, most schools around the country were still closed as Texas and a handful of other states were reopening in “less-than-ideal circumstances,” said Aaron Yelowitz, an economics professor at the University of Kentucky and one of the study’s researchers. The state also provided good conditions for pre-vaccine study, he added, since data was collected from May 2020 until January of this year, when vaccine rollout was still slow.

Although more Texans have since been vaccinated — about 30% had been fully vaccinated as of Saturday — Yelowitz said there are still communities in which the study’s findings could matter moving forward, like areas with more vaccine-hesitant or vaccine-resistant people.

Across the state and the rest of the country, school reopening plans divided many communities last year. Proponents of reopening schools said in-person schooling would improve learning, increase social interaction, and allow access to state services like special education and free and reduced-price lunch programs. Opponents said remote learning was safer and did not risk the lives of teachers, faculty and staff, particularly after an intense summer surge.

When Abbott ended Texas’ mask mandate in March, he said public schools should operate under TEA’s eventual guidance. At the end of March, TEA released guidelines requiring face masks in school buildings, with some exceptions, which included students younger than 10 or those eating or exercising.

More than 60% of school districts opened schools at or near their typical date for the fall term, despite the state’s summer surge of cases, hospitalizations and deaths, according to the National Bureau of Economic Research report. The researchers estimated that more than 90% of Texas school districts opened without any staggered attendance plans, compared with more than 40% nationally; the study found that roughly 60% of Texas districts had 80% or more of their students enrolled in-person by the end of September 2020.

Although otherwise healthy children are generally less likely to contract and transmit COVID-19, adults can still contract the virus from their students and co-workers at school. The study’s results could be explained both by direct school spread and by the movement of adults returning to work and school, the researchers wrote.

“Reopening schools in a world where there wasn’t a vaccine at the time did cost lives, did cause infections, though probably did have some positive effects for the kids who were able to attend in person, rather than virtually,” Yelowitz told The Texas Tribune.

“Texas schools have mitigated the worst of these issues for many students by remaining open for all students who chose to attend this school year,” he wrote in an email, “and we stand firmly by our decision as a state to offer options for our students and their families at a time when many students across the country did not have those options.”

TSTA continues to push for requiring everyone to wear a mask in schools because it’s still hard to know who is vaccinated, she said.

Although in-person attendance is valuable for students because of its learning and relationship benefits, Molina said many educators and staff members have died of COVID-19, and the trauma that losing a teacher brings to students and co-workers is important to consider.

“It’s just this sense of urgency that we know we have and we feel, and we want others to have as well,” Molina said.