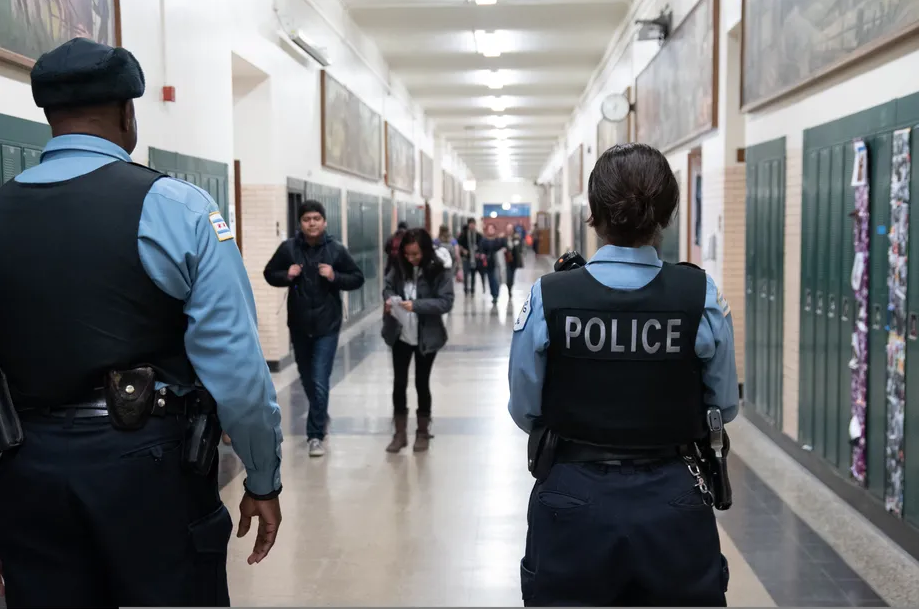 At Hyde Park Academy on the South Side, the school’s governing council voted to keep one campus police officer and replace another with a dean in charge of culture and climate.

At Kennedy High School on the Southwest Side, the council will replace two student resource officers with a student support specialist and private security.

In high schools across the city, local school councils — once again tasked with the decision to keep or remove school police — have been grappling with the best way to keep students safe. The groups were first handed the authority last summer to decide whether to retain or remove police. Of the more than 70 schools that took a vote, 17 opted to remove police  — decisions that became mostly moot after COVID-19 led to school closures.

This time, the conversations were more nuanced and informed by more comprehensive data showing students of color are more harshly disciplined and overpoliced than their white peers.

The outcomes were different as well.

Allowed to develop alternative safety plans in lieu of police and given at least $50,000 in flexible spending per officer, councils drafted a long list of alternatives, from off-duty officers stationed at pickup and dropoff to hiring administrators, social workers, and restorative justice coordinators.

After months of deliberating, at least 22 campuses voted in the latest round to eliminate one or more officers, while at least 16 voted to keep them by this week’s deadline, according to votes compiled by Block Club Chicago and Chalkbeat. Chicago Public Schools launched an online vote tracker in July as the process reached its home stretch.

“As a parent, when you think of safety, you think of well-being, whether it’s the emotional or physical,” Lindblom council chair Rosario Ayala said of a more holistic model for thinking about safety.

Now, council members must also consider the potential consequences of those choices: Will getting rid of police leave students more vulnerable to gun violence or school shootings? Will replacing student resource officers with off-duty cops or hired security create a force with less accountability? Will the alternatives make a difference for students?

The decision to remove or reduce officers

Chicago’s second round of conversations around school police this spring coincided with the one-year anniversary of George Floyd’s murder by police officers in Minneapolis. That event sparked nationwide protests against police brutality and a wave of student-led organizing around the issue. Locally, students argued loudly that mental health experts were better suited than police to work on their campuses in a crisis.

As council members started to decide for themselves what safety should look like in their schools, they had to weigh fear of gun violence on campuses with overinvolvement of officers in campus discipline, especially when dealing with people of color. In Chicago Public Schools, where nearly 36% of students are Black and nearly 47% are Latino, 73% of CPS students arrested in the 2019-2020 school year were Black. Latino students made up 22.5% of arrests, and white students accounted for 3.2%.

But councils also had to consider how to maximize limited budgets. Unlike the votes last summer, when schools that removed officers were given no replacement options, campuses will receive at least $50,000 from the district for each officer they remove, with more money going to schools prioritized by the district’s Equity Index, district spokesman James Gherardi said.

Still, some council members worried that is not enough for fully comprehensive plans and cited previous reporting showing an average campus police salary of $87,000, plus an additional $65,000 in benefits.

“People did not feel that was enough of a trade-off,” said Hyde Park Academy council member Maira Khwaja. “Schools are still unfortunately looking at this as, ‘How do we fill the void left by police?”

At Lake View High School, the local school council started with a definition of safety that also addressed bullying, students’ emotional well-being and the social climate on campus. Discussions on the safety plan included an analysis of the top causes of death for adolescents.

“Anxiety, depression, feelings of hopelessness, reckless behavior fueled by alcohol and drugs — those are the things that are most likely to take our children’s lives,” Lake View Principal Paul Karafiol said in a July meeting. “Our money would be better spent on those.”

Ultimately, the council approved by a 12-2 vote a safety plan that will eliminate two school resource officers, releasing $100,000.

That money will go to additional security to monitor arrivals and dismissals — a job previously held by the school police officers — during a time when school resource officers are considered most vital. Security personnel will be trained in restorative justice and conflict mediation to resolve issues between students, Karafiol said.

The rest of the money will go toward a staff member to assist the attendance office in finding students when they cut class, a safety issue because it leaves students unsupervised on or near campus, as well as trainings about racial disparities facilitated by the California-based consulting firm Courageous Conversations.

On the Southwest Side, the council for Kennedy High School similarly decided to remove its officers. Many council members agreed they liked having officers on campus, but they decided officers weren’t the best use of funds. They approved a safety plan that calls for a full-time student support services specialist to boost social-emotional programs for students.

The goal: ensuring “every student has at least one trusted adult in the building, that they feel comfortable going to for support,” said Principal George Szkapiak.

Remaining funds will go to hire off-duty cops who will be uniformed as private security to monitor the building’s entries and exits during arrival and dismissals.

“Who’s responsible for that,” Homan asks, “if something happens with these hired school security officers that aren’t SROs?”

Some school councils are betting on that but are reluctant to remove officers entirely after surveys of parents, students, and staff. Instead, they are opting to keep one or two and use the freed-up funds to invest in mental health professionals.

At Lindblom Math and Science Academy, the school will ramp up restorative justice programs, partner with a local nonprofit to bring in additional counseling services and work with the local police district to have officers present outside the school at arrival and dismissal. Hirsch Metropolitan High School will remove one officer and hire a full-time social worker.

After a survey conducted at Wells High School on the Northwest Side revealed a split between parents and educators — at least 90 percent of staff wanted to reduce police, while parents overwhelmingly wanted to keep them — the council ultimately moved to remove one officer from campus for the following year. Instead, Wells is hiring another student social worker and two additional security officers. The funds received in exchange for the police officer won’t entirely cover the cost of the social worker, so Wells is picking up the rest of the tab.

At Hyde Park Academy, the council initially voted to retain both officers. The group later reversed its decision and voted unanimously to approve a plan that keeps one officer at the school and removes the other. In the officer’s place, the school will hire a dean of culture and climate empowered to mediate conflicts and improve restorative justice practices at the school.

“Usually when there are physical fights that break out, it is because of interpersonal conflict that just has not been addressed and it builds up,” she said. “How we get at the root cause is giving kids the space and emotional attention to work out some of the issues before they escalate into a safety crisis.

“We don’t keep students safe just with the threat of arrest.”

Some vote to keep

Even among the councils that decided to keep police, the votes have prompted deeper conversations about other ways to support students.

The council at Bowen High School voted unanimously to keep both officers in the building, while acknowledging the school should also expand its restorative justice practices. Bowen has six security officers spread thinly across the five-story building, so the group decided police officers were a necessity.

Similarly, Morgan Park High School voted to keep both officers. But rather than relying on officers as the school’s only safety mechanism, Morgan Park will implement a peer jury to help resolve conflicts, as well as more robust training in restorative justice, which relies on conflict resolution techniques in lieu of punitive discipline.

“What may be best for Morgan Park may not be best for Lane Tech, and that’s OK,” Parker said.

Watts, the student advocate with Voices of Youth in Chicago Education, has spent the past few months observing the process. His group is one of five community organizations that helped the district develop its Whole School Safety strategy. He said he’s optimistic about the changes — particularly in efforts at schools such as Morgan Park to take more student voices into consideration — and by school-level discussions about what robust mental health services should look like.

In a crisis, he said, some students can’t talk to police officers because they have experienced trauma linked to policing.

“School should be a pleasant, peaceful place for us to learn,” Watts said. “Education shouldn’t be a place where we’re potentially being arrested for something we didn’t do wrong.”

His vision, however, is a cautious one because it’s too soon to say what will happen next year.

Under the district’s new approach, schools will vote to retain or remove campus police officers on a year-by-year basis. Nothing’s set in stone.