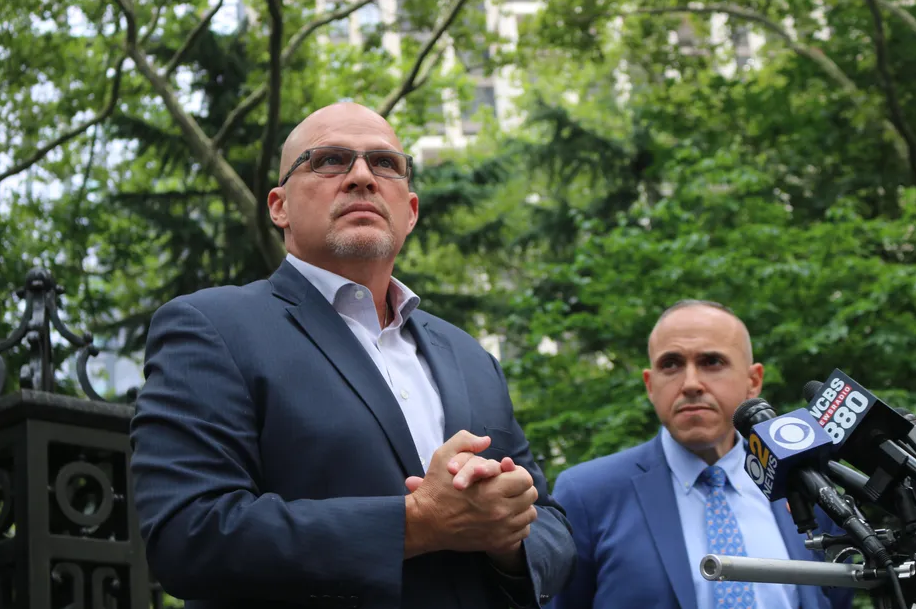 City council members and the teachers union want New York City to further limit the number of students allowed in a classroom by amending the city’s administrative code.

The change could address the dual concerns of class sizes and public health, as COVID threatens to disrupt a third consecutive school year.

City Council education committee chair Mark Treyger, finance committee chair Danny Dromm, and United Federation of Teachers President Michael Mulgrew unveiled the proposed legislation at a press conference Thursday morning outside of City Hall. Dromm and the union recently pushed to reduce class sizes across the city as part of this year’s budget. Ultimately, they got an $18 million pilot program to hire more teachers at 72 schools.

The proposed legislation calls for increasing the amount of space required per student, growing from 20 square feet to 35 square feet in classrooms serving first through 12th grades. (That is the current standard for younger students and those with mobility disabilities.)

According to the union and to council members, most New York City classrooms range in size from 500-750 square feet. If the new guidelines are approved, that would mean a maximum of 14 students would fit in a 500 square-foot room, while 21 students would fit in a 750 square-foot room. Supporters of the changes say they would help ensure more social distancing and improve ventilation as the city faces a rise in coronavirus cases fueled by the delta variant.

The changes would be phased in over time, with 33% of schools meeting the new standard by 2022-23 and 66% by 2023-24. Full compliance would be reached by September 2024 under the proposed legislation.

Parents and teachers, however, have immediate concerns over whether classrooms will be safe next school year, which starts Sept. 13. Vaccinations among youth remain low and many children are still ineligible for the shots.

The U.S. Centers for Disease Control and Prevention have recommended everyone inside of schools wear masks this fall, regardless of vaccination status. Federal guidance also says that schools can relax social distancing if the need for space gets in the way of ensuring students can attend school in person.

New York City’s education department had previously estimated that about 10% of schools do not have room to follow social distancing while accommodating all students. Mulgrew on Thursday estimated that 200 schools are too overcrowded to ensure three feet of space between students, saying that administrators have been left on their own to figure out how to make room for them all.

“Right now, the city doesn’t have a plan,” Mulgrew said.

In addition to taking time to phase-in, changing the building code is also likely to be expensive as it could mean building new school seats. The education department’s most recent capital plan already calls for the addition of 57,000 new seats — but projecting enrollment can be difficult, especially as the pandemic has led many families to leave the city. Additionally, finding land suitable for schools can be a years-long endeavor.

Adding to the bottom line: The city would likely have to hire many more teachers to make the smaller class sizes a reality. Pushing for smaller class sizes has been a perennial issue for advocates, and changing the building codes could be one way to make that a reality. Dromm said the pilot approved this year is “just not enough” and described schools turning closets into rooms for speech therapy when he was previously a teacher in New York City.

“Something has to be done that tells the city, ‘You don’t have a choice any more,’” Mulgrew said. “It is time for the city to be forced to focus on the issue of overcrowded schools and classrooms.”