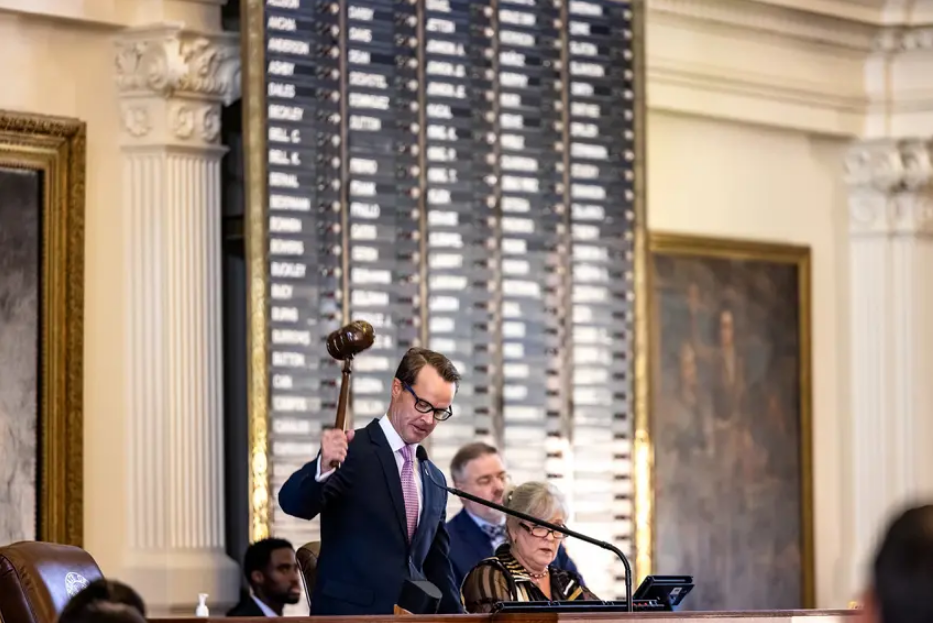 Texas House Speaker Dade Phelan on Tuesday evening signed civil arrest warrants for 52 House Democrats still missing from the stateCapitol as he aimed to regain the quorum needed for the chamber to begin moving legislation during the second special session.

The move was confirmed by Phelan spokesperson Enrique Marquez, who said the warrants “will be delivered to the House Sergeant-at-Arms tomorrow morning for service.”

The warrants were first reported by The Dallas Morning News. Democrats who may be arrested would not face criminal charges or fines and could only be brought to the House chamber. Dozens of minority party members fled to Washington, D.C., during the first special session to block a GOP voting restrictions bill.

The 52 warrants represent all but 15 Democrats in the lower chamber. There were at least 11 present Tuesday. There were no additional new Democrats on the floor Tuesday after four returned a day earlier — and drew the wrath of some Democratic colleagues still in Washington, and prompted a renewed push inside the party to hold the line.

Earlier Tuesday, the House voted overwhelmingly to authorize law enforcement to track down lawmakers absent from the chamber.

That 80-12 vote came hours after the Texas Supreme Court ordered that those missing Democrats could soon be detained by state authorities. The order by the all-GOP court came at the request of Gov. Greg Abbott and Phelan, both of whom had asked the court Monday to overturn a ruling from a state district judge that blocked those leaders from ordering the arrest of the quorum-breaking Democrats.

In a statement after the warrants were signed Tuesday evening, state Rep. Chris Turner of Grand Prairie, who chairs the House Democratic Caucus, said it is “fully within our rights as legislators to break quorum to protect our constituents” and reiterated Democrats’ commitment “to fighting with everything we have against Republicans’ attacks on our freedom to vote.”

Since the Legislature gaveled in Saturday for its second special session ordered by Abbott, the House has been unable to make a quorum as dozens of Democrats have remained absent from the chamber.

When the House was unable to meet its 100-member threshold to conduct business Monday, members adopted a procedural move known as a “call of the House” in an effort to secure a quorum. That move locks doors to the chamber and prevents members on the floor from leaving unless they have permission in writing from the speaker.

That vote earlier Tuesday marks the second time in recent weeks that the chamber has voted to send law enforcement after Democrats still missing from the House.

During the first special session in July, and after more than 50 House Democrats flew to D.C., members present authorized state authorities to track down their colleagues — but the move carried little weight since Texas law enforcement lacks jurisdiction outside the state.

By the time that first 30-day stretch ended last week, Phelan had signed only one civil arrest warrant, for Rep. Philip Cortez, a San Antonio Democrat. But that move came too late since Cortez, who had briefly returned to Austin, had already gone back to the nation’s capital.

Intraparty pressure has been mounting on House Democrats since the second special session started. After at least four of them returned to the floor Monday, bringing the chamber within five members of a quorum, some of their Democratic colleagues who were still in Washington unleashed on them. Rep. Ana-Maria Ramos of Richardson tweeted at the returning Democrats that they “all threw us under the bus today.”

“To every pro-democracy Texas lawmaker: the only way to preserve our right to vote and the best way to fight is to stay off the House floor,” the coalition’s statement said.

The group also released a four-page memo arguing that far more was at stake in the second special session than just the elections bill, citing a “host of radical conservative priorities” throughout the agenda. The memo was particularly emphatic about a new proposal for the second special session — dropping the quorum threshold to a simple majority — calling it an “ominous allusion to reducing or eliminating minority rights in the Legislature, breaking centuries of Texas bipartisanship.”

Meanwhile, a number of House Democrats have returned to Texas but have not come to the House floor to help provide quorum.

State Rep. Celia Israel, who has said she’s back in Austin, said in a statement to the Tribune after Tuesday evening’s news that “Texas deserves so much more.”

“I didn’t sacrifice my business and my family over the last few weeks to just swing the door open for a civil warrant based on right wing politics and pandering to 5 percent of the voters,” she said. “It’s sad that it’s come to this.”

One of them is state Rep. Evelina “Lina” Ortega, who says she is home in El Paso but not showing up on the House floor until there is already a quorum or a majority of the Democratic caucus decides to be there.

“I pretty much feel that it’s a shame that the governor and Republicans … are really using the dirtiest tactic available to them,” Ortega told the Tribune on Tuesday evening after the House’s vote to send law enforcement after the absentee Democrats. “To me it’s all about a power grab. I’m glad to stay away and continue to fight them.”

As for whether she is concerned about arrest, Ortega said she believes it would be a “big mistake” by Republicans.

“We’ll see what happens,” she said.