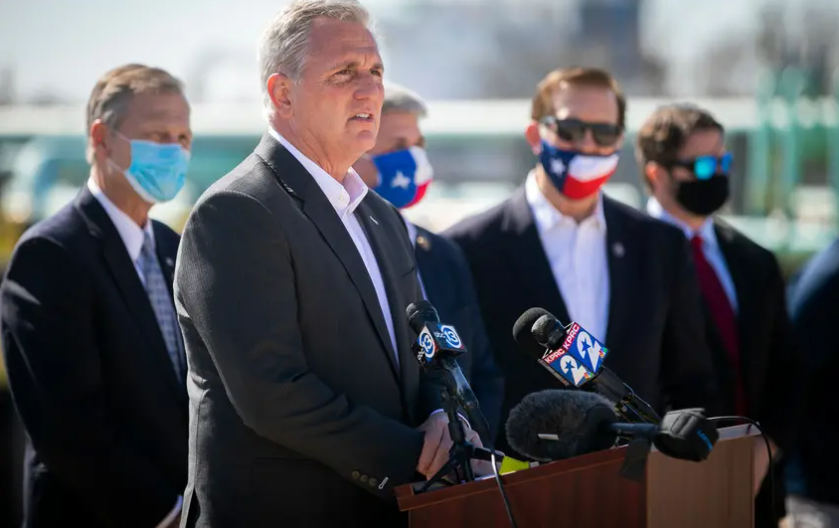 Surrounded by refineries and chemical plants that make up the Houston Ship Channel, the Republican leader of the U.S. House stood last week along what he called “one of America’s success stories.” A cadre of Texans in Congress flanked U.S. Rep. Kevin McCarthy of California to continue a campaign of criticisms they’ve lobbed at President Joe Biden’s climate-focused agenda.

Biden’s swift moves to combat global warming have brought equally quick criticisms from state officials that Texas oil and gas jobs are in danger. But their comments often ignore that there is a global push in the free market — not just from the White House — to limit reliance on fossil fuels. And their rhetoric belies the benefits Texas’ oil and gas sector could see from Biden’s early moves.

“Unfortunately, our economic bedrock of oil and gas is under attack by an administration that is bent on eliminating millions of jobs,” said U.S. Rep. Brian Babin, R-Woodville, one of seven Texas lawmakers who joined McCarthy last week in front of one of the busiest cargo ports in the world.

Even before Biden took office last month, Texas lawmakers had forecasted doom and gloom for the state’s energy industry, projecting the sector’s demise at the hands of the new president. And it hasn’t been a strictly partisan battle: Even Texas Democrats have swiftly pushed back against Biden’s early moves aimed at protecting the environment.

However, the percentage of jobs in the oil and gas industry had begun steadily declining, both in Texas and nationwide, long before Biden took office. In 2014, more than 2.5% of jobs in Texas were in the oil and gas, mining and quarrying industries, according to the Texas Workforce Commission. At the beginning of 2020 — before the coronavirus pandemic and a global drop in the demand for oil — the share of jobs in the Texas oil and gas field had fallen to about 1.8%.

A majority of Americans have said they are interested in a clean and safe environment. Their spending habits increasingly demonstrate that, which experts say poses a much larger threat to the Texas oil and gas industry than Biden does. And, in the short term, Biden’s moves may help Texas, some say.

“Basically every executive action Biden’s taken is good for Texas oil and gas,” said Michael Webber, energy professor at the University of Texas at Austin.

On his first day in office, Biden signed an order revoking a permit the Trump administration granted to a Canadian energy company behind the Keystone XL pipeline. The decade-old international energy project consists of a partially built system of pipelines that run from Canada into the United States.

A portion of the project has already been built through East Texas. The contract Biden yanked revolves around a proposed part of the pipeline that would stretch from Canada to Nebraska. Amy Myers Jaffe, managing director of the Climate Policy Lab at Tufts University in Boston, spent two decades working on energy issues in Texas. She said the construction jobs lost from the project’s halt won’t come from Texas.

“People have a sort of litmus test gut reaction to the cancellation of the Keystone pipeline, but the reality is it’s not likely to have an impact on Texas employment,” she said.

Biden also quickly signed an order directing the Interior Department to halt extending new contracts for 60 days to companies trying to extract fossil fuels on federal lands. That practice simultaneously generates billions of dollars in royalties and revenues for local and state economies throughout the country. Any existing oil and gas production on federal lands can continue — Biden’s order only blocks new drilling on federal land.

But there is hardly any federal land drilled in Texas, so experts said the state is barely impacted by Biden’s order. Instead, states like New Mexico, North Dakota and Wyoming, where there is substantial fossil fuel extraction on federal lands, will likely be directly affected.

“Texas production will not be affected. It might affect Texas companies who are active in those states,” Webber said. “But it’s a mixed bag, because if you make production more difficult in other states it makes production in Texas more favorable. It’s one of those things where it’s probably good for Texas — Biden’s doing battle against Texas’ competitors.”

Katie Mehnert is chief executive of Ally Energy, a digital forum that lists energy jobs aimed at diversifying the industry, which in Texas is dominated by white men. She said how well Texas companies fare likely hinges less on Biden’s orders and more on their efforts to provide lower carbon energy solutions — such as solar, wind, geothermal and other cleaner energy sources.

“It depends on how the business is positioned for the energy transition,” Mehnert said.

Tim Latimer, chief executive of Fervo Energy in Houston, said many new jobs will be created as companies invest in “unprecedented amounts of construction” to meet the country’s climate goals over the next decade and beyond. But economically, the transition will be tricky and messy.

“There will not be a one for one job replacement,” he said.

Texas lawmakers have latched on to the negatives.

U.S. Reps. Vicente Gonzalez of McAllen, Henry Cuellar of Laredo, Lizzie Pannill Fletcher of Houston and Marc Veasey of Fort Worth objected to the president’s order directing the secretary of the interior to halt new oil and gas leases on federal public lands and waters.

Fletcher represents western Harris County, where several major energy companies are located. On Thursday, she also objected to Biden revoking the pipeline permit “both on process and substance.” She said in a virtual news conference she would have liked to see a “much more thorough process” before Biden reached the decision to kill the pipeline.

While the political back-and-forth among Texas politicians over energy has been aimed at Biden, private companies have for years been adjusting to shifting consumer behaviors and demands.

BP, one of the world’s largest oil and gas companies, said in early 2020 it would cut the carbon content of its products in half by 2050. That’s a timeframe and objective scientists recommend the world needs to strive for in order to avert catastrophic effects from severe climate and environmental damage.

And just last month, General Motors said it would phase out petroleum-powered cars and trucks and sell only vehicles that have zero tailpipe emissions by 2035. That was seen as a massive move by one of the world’s biggest automakers that has for years made billions of dollars from gas-guzzling trucks, among many other gas-powered vehicles.

Pivoting to a focus on climate change is part of a larger global shift, Latimer said.

“But these trends don’t start with or are caused by the Biden administration,” Latimer said. “It’s about what customers want, what young people want, what international corporations want. Everyone wants a new world that’s focused on solving climate issues.”

The ongoing shift to focusing on climate issues does not, however, spell the end of oil and gas.

“We’re going to need fossil fuels,” Mehnert said. “Medicines, chemicals, everything we touch, everything we have around us, is made from petroleum base.”

This article was originally published on Texas lawmakers have denounced Joe Biden’s energy moves, but experts say they could benefit the state