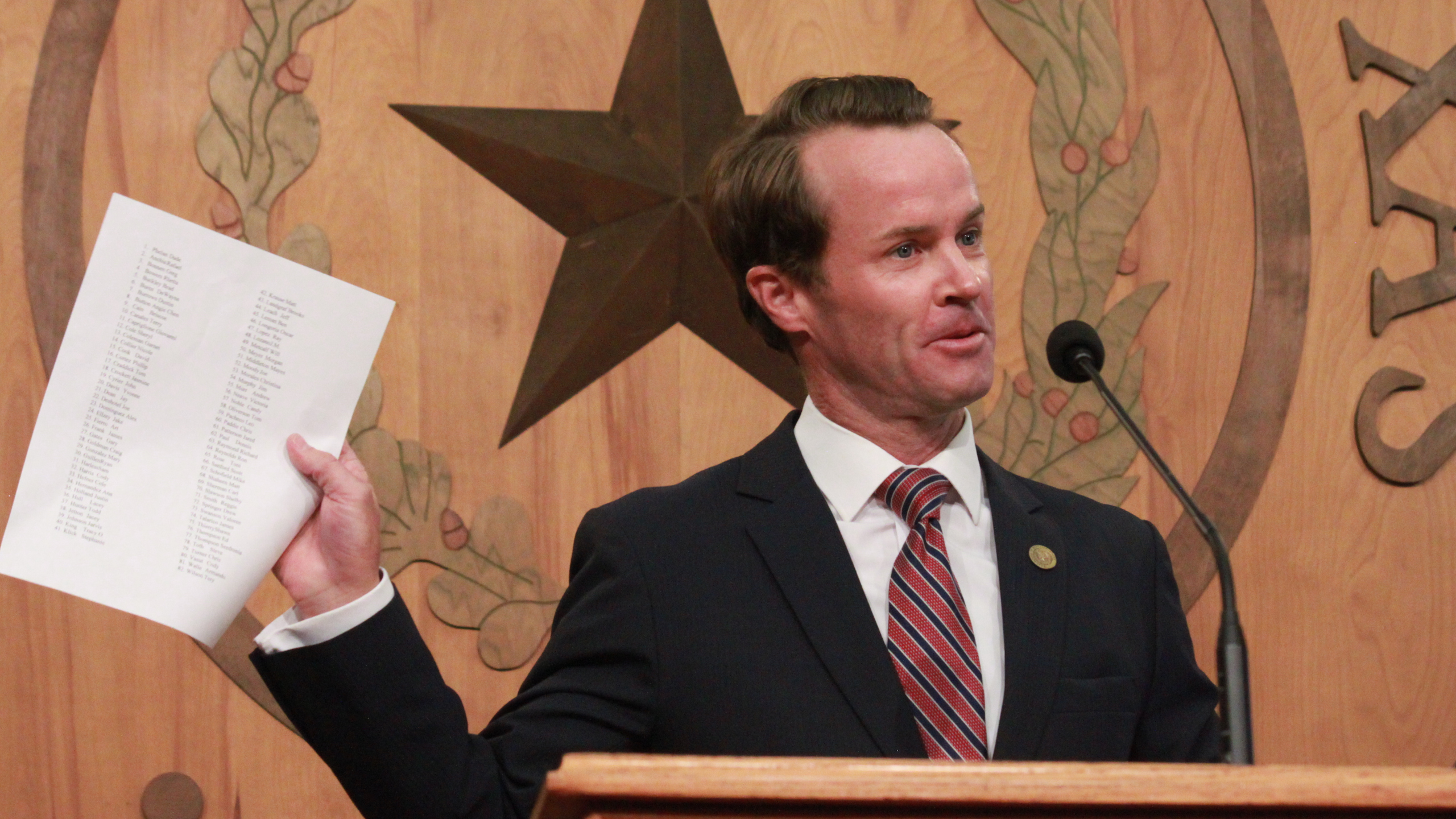 This is not the first time a speaker of the Texas House has had an up-close-and-personal view of the relationship between Gov. Greg Abbott and Lt. Gov. Dan Patrick. But it’s the first time for newly elected House Speaker Dade Phelan.

Abbott and Patrick are in the middle of their fourth full session of the Legislature together, a season often marked by disagreement, contention and posturing. During a legislative session, the three top leaders meet for Wednesday morning breakfasts — when they’re in civil enough moods to get together and break bread.

That civility is intact, so far, and so is the awkwardness that goes with the tradition: putting competing politicians at a table in a room while a horde of legislators, lobbyists, state workers and others wait to see whether they’re smiling or frowning when they come out — or when they go in.

The last week has seen some public arm-wrestling over energy pricing during February’s statewide power outages, some legislative chest-beating, uncomfortable interrogations and the resignation of the last of the governor’s three appointees at the Public Utility Commission. Patrick led the charge, hectoring the regulators who oversee the state’s electricity business, trying to force a do-over of $16 billion in market transactions during the week the state was frozen. Patrick and the Senate think state regulators left market prices too high and should go back and “correct” them. The lone remaining Public Utility Commissioner, Arthur D’Andrea,with Abbott’s implicit assent, testified that doing so would be illegal, extremely difficult and unprecedented. And on Tuesday night, the governor asked for and accepted D’Andrea’s resignation — something Patrick had been urging him to do.

That’s the subject matter, and it’s got a serious undertow of power politics. Patrick said he’s not after Abbott’s job in the same Monday news conference where he was trying to push Abbott to take the Senate’s position. “The Senate has acted,” Patrick said Monday, after the Senate rushed to introduce and approve legislation that would require a reduction in the wholesale energy prices charged during the freeze. “We are asking the governor to join us.”

Abbott added energy wholesale pricing to his list of “emergency” items after Patrick had demanded regulators reduce the prices they set during the freeze. Patrick took a rare turn at the microphone during a Senate committee hearing, joining state senators in hard questioning of D’Andrea, later calling on the governor to replace the commissioner. Abbott, in a letter, told Patrick that he agreed with D’Andrea, and that the issue was in the hands of the Legislature and not the PUC. A day later, he asked the commissioner to quit.

On Monday, the Senate filed and passed re-pricing legislation in less than half a day. At a news conference when they were done, Patrick reiterated his political intentions: “I am not running against Greg Abbott, OK? … And I’m not going to be that politician that, a year from now, says, ‘Well, you know, I changed my mind.’ I’m not changing my mind. He and I work very well together.”

During the 2019 legislative session, Abbott, Patrick and then-House Speaker Dennis Bonnen did everything but drive up and down Congress Avenue on Friday nights together — a perfect picture of harmony at the top and a shared goal of answering voter wrath about public education finance and property taxes. They held news conferences at the beginning and at the end of that 20-week session, with breakfast every Wednesday in between.

But four years ago, the regular breakfasts broke off weeks before the session ended, in large measure because the top three officials disagreed about an attempt to regulate bathroom use and keep transgender Texans from using bathrooms that align with their gender identity. The bad blood seeped into the special sessions that followed the regular session. By August of that year, Patrick was telling people he hadn’t had a face-to-face meeting with then-House Speaker Joe Straus in nine months.

The breakfasts are symbolic but meaningful. It’s a time for top management to talk to each other directly, instead of through staff or through competing news conferences and other pronouncements. They can be tense, like the one during the 2015 session where the unholy trinity argued over the progress of Pre-K education and other legislation and came out acting like they’d each been served a plateful of rotten eggs.

The morning meetings are also private: The only way to know what’s going on in there is to wait for the diners to talk about it. But use your imagination, based on the last week or so of public barking from Patrick and from Abbott — and from Phelan’s message to Patrick Tuesday afternoon: The House has put that rushed Senate bill on ice. Add in the after-hours sacking of the commissioner.

It’s an education for Phelan, who has been speaker of the House for just two months. He and his two fellow Republicans are struggling with gnarly policy issues like power outages and police violence during a weird session transformed by a pandemic from a very public civic exercise into a series of long meetings in a shockingly empty Texas Capitol. That’s hard enough when they’re getting along.

After Patrick talked about how well he and the governor are getting along, he sharply took issue with a line in a column published earlier this week that Abbott is his superior — a line that lit up his competitive streak.

“I’m the lieutenant governor,” he said. “I run independently of the governor and the speaker. We work together. We work as partners. We’re not superior to each other. The public are our superiors. The reason we passed that bill today is because the public clearly wants us to do the right thing, and I believe the governor wants that as well. Thank you all very much.”

It’s enough to make you wish you had Phelan’s seat at breakfast.