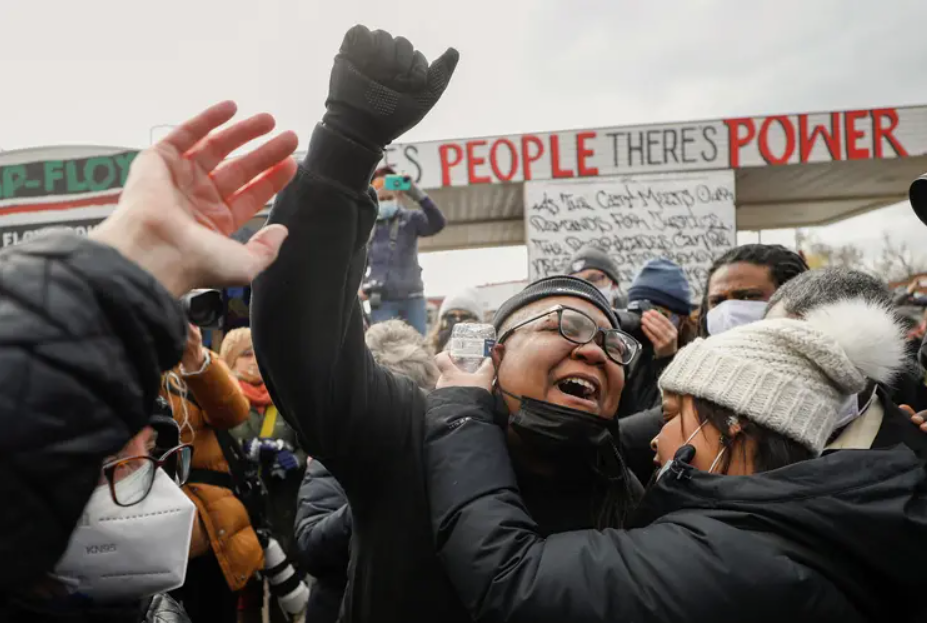 Texas lawmakers and activists portrayed Tuesday’s guilty verdict in America’s most closely watched trial of a white police officer in a generation as a step toward justice — but said there is more work ahead to reform police behavior and the criminal justice system.

Floyd’s murder sparked nationwide Black Lives Matter protests across the U.S. and in Texas during the summer and prompted renewed calls for police reform. And Texas police departments garnered criticism for their use of force during those protests. Before this year’s legislative session began, the Texas Legislative Black Caucus unveiled the George Floyd Act that would ban chokeholds and limit police use of force in an effort to protect Texans from police brutality.

Members of the caucus celebrated Chauvin’s conviction by pumping their fists and hugging during a Facebook Live stream. Many state legislators, including multiple caucus members, responded to the verdict with public calls to pass the caucus’ police reform bill, or House Bill 88, which was left pending in committee in March following a debate over a provision that would remove police officers’ legal shield against civil lawsuits.

“A just verdict, but this is only one step, and it can never bring George Floyd back,” state Rep. Sheryl Cole, D-Austin, wrote on Twitter. “Now we must pass the George Floyd Act and other reforms so that we never have to do this again.”

Before moving to Minneapolis, Floyd, a 46-year-old, was a resident of Houston’s Third Ward, a historically Black neighborhood. Texans across the state, including Floyd’s friends, family and residents of the Third Ward, had varied responses to the verdict, including sighs of relief or applause, according to The Houston Chronicle.

During a press conference, Houston Mayor Sylvester Turner called for reflection, and he said he and the Houston Police Department would be announcing police reforms next week. Turner said reform is a constant process that also includes investing in underserved communities, like the Third Ward, in a “real and tangible way.”

“Justice has been served,” Turner said. “The Floyd family has waited for almost a year for this verdict, but I will quickly say that they will experience the loss of their loved one, George, for the rest of their lives.”

Multiple U.S. Congress members representing Texans also shared their responses to the verdict Tuesday, with some calling for the U.S. Senate to pass the George Floyd Justice in Policing Act. The federal bill, which passed the U.S House in March, would ban the use of chokeholds and no-knock warrants and set other national standards for police conduct.

Some of the Congressional representatives also made calls for reform and noted that a verdict wouldn’t bring Floyd back to his family. U.S. Rep. Colin Allred, D-Dallas, tweeted that the verdict was “a step toward justice” for Floyd, his family and the people who have called for justice for victims of police violence and encouraged people to remain dedicated to police reform.

“This verdict is not justice — it’s accountability. Justice is George Floyd still being alive today, raising his children and spending time with his family,” U.S. Rep. Eddie Bernice Johnson, D-Dallas, said on Twitter. “I hope that they can find peace knowing that his life inspired a generation, sparked a movement, and changed the world.”

Republican U.S. Sen. Ted Cruz did not say whether he agreed with the verdict, but said America has the “finest justice system in the world.”

“It protects due process, starts with the presumption of innocence, and requires the government to prove its case,” he said in a statement Wednesday. “I agreed with the prosecution bringing charges and called for Officer Chauvin to be prosecuted to the fullest extent of the law. But under our constitutional system, it is not politicians in Washington reading newspaper headlines who render a verdict in criminal cases, but rather a jury of one’s peers. And in this case the jury rendered a guilty verdict after a full trial.”

Republican U.S. Sen. John Cornyn did not respond to a request for comment about the verdict.

Many activists in the state said they were grateful for the verdict, and others stressed that a verdict will not eliminate racism in the U.S. Chas Moore, the executive director and founder of Austin Justice Coalition, said he was relieved, but there are still much needed changes, including reimagining the role of police and expanding the definition of public safety to include neighborhoods with access to lighting, education and healthy food.

“I hope this verdict sends a message that, you know, there are going to be some changes in policing,” Moore said. “I want to see a change in police culture, to where we can limit or completely cancel the George Floyds, the Breonna Taylors, the Sandra Blands, the Daunte Wrights, and the Mike Ramos. I really hope this serves as a catalyst for culture change amongst law enforcement departments around the country.”