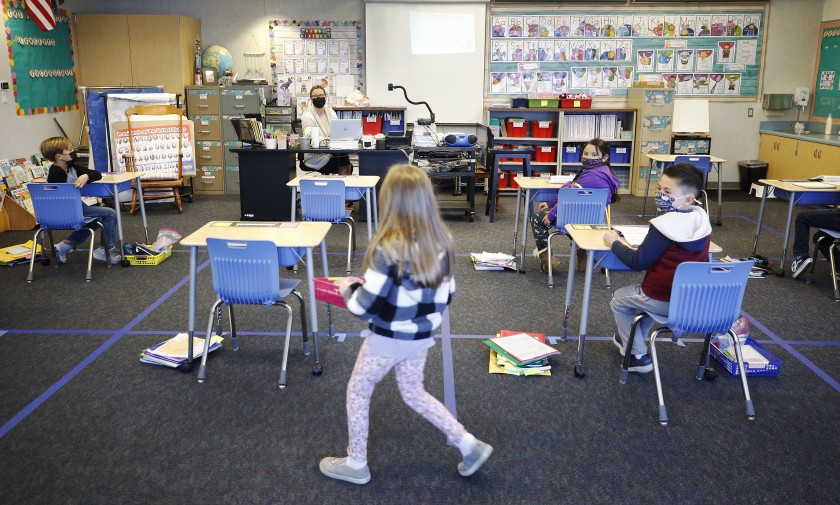 Texas’s top state leaders announced Wednesday they are releasing $11.2 billion out of nearly $18 billion available in federal pandemic relief funding that has been dedicated for the state’s public schools.

The announcement comes as education advocates and Demcratic lawmakers have been urging officials in recent weeks to release the money that was set aside by Congress for Texas’ public schools to address learning loss and cover pandemic-related education expenses.

It’s unclear how the state plans to spend the remaining $7 billion in stimulus money, which was allocated through multiple aid packages in response to the COVID-19 pandemic. That funding could not be immediately released due to federal requirements, state officials said.

“The State of Texas is ensuring that our public schools have the necessary resources to help Texas students recover from learning loss related to COVID-19,” said Gov. Greg Abbott in a press release.

“State Republicans are hardly justified in patting themselves on the back for ending a blockade that should never have occurred,” Doggett said. “After four months, Governor Abbott is still obstructing distribution of the remaining $5.5 billion, which Congress approved in December. Even today, he has failed to offer any justification for his delay and attempt to divert these funds from our schools. Our children’s future is not a place to cut corners and misuse federal aid to education for non-educational purposes.”

State officials had previously argued the reason they hadn’t allocated the one-time funding to the schools was because they were awaiting federal government guidance about whether the state would need to increase funding for higher education to make the K-12 funding available.

Last week, the federal government weighed in and clarified the state must maintain both higher education and public education funding at the same proportion to the budget as it was in 2017, 2018 and 2019 to tap into those dollars. Effectively, that means Texas would have to increase higher education spending by $1.2 billion to unlock the K-12 stimulus dollars.

Abbott has applied for a federal waiver that would allow Texas to bypass increasing higher education spending, but no decision has been announced on whether the waiver was granted. His office did not respond to questions about what this announcement means for higher education funding or why the public school funding was released. The announcement said legislative leaders will work to address outstanding issues about distributing the rest of the federal funding by the end of the legislative session.

“The state is seeking a federal waiver to avoid this additional spending, but that is the wrong thing to do, especially at a time when our institutions of higher education need the additional funding to cover extra expenses incurred during the pandemic,” said Texas Faculty Association President Pat Heintzelman in a press release this week.

School districts also called the state to release the money because they need to know how much money schools will receive as they develop budgets for next year. While the funding can be used for a variety of resources, including extra mental health support, counselors and more staff, school leaders were growing concerned they would run out of time to hire the necessary staff without access to more money.

“This is a positive first step in getting the funds our schools need,” said Zeph Capo, president of Texas American Federation of Teachers, in a statement. “It’s unfortunate that it took nearly two months of pushing the governor to get to this point. Many districts that have been contemplating cuts related to pandemic expenses can now implement plans to help students catch up.”

The governor’s office and Texas Education Agency have argued the state has supported public education by fully funding virtual learning and maintaining fully funded budgets for school districts regardless of attendance declines. A spokesperson for Abbott also previously said that the proportion of funding going to higher education has decreased because of increases in K-12 investments.

This money is in addition to approximately $2.2 billion in federal funding to help Texas public schools manage the pandemic. It also comes after the state increased its investment in public education by more than $5 billion from the previous year in 2019.