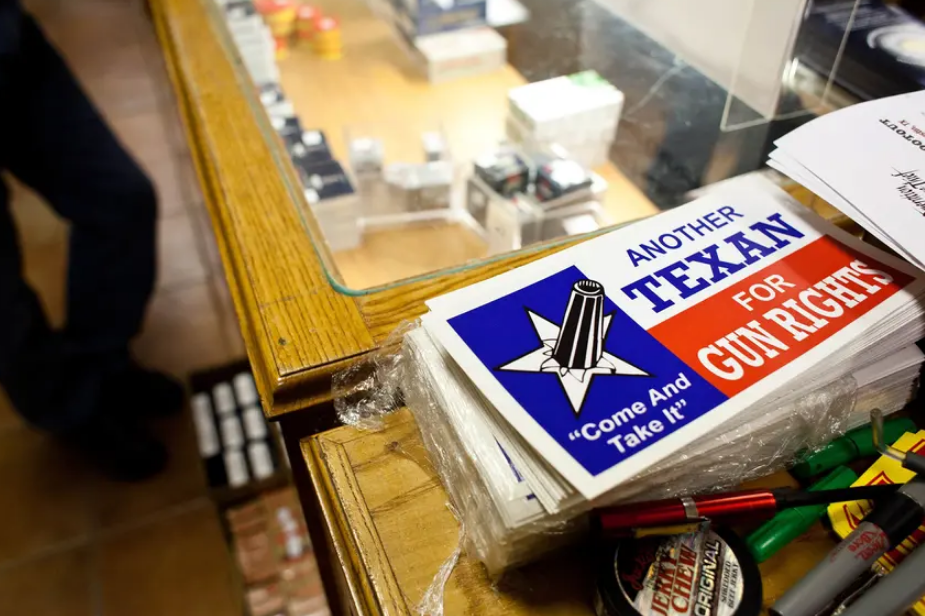 But legal experts say the move is largely symbolic, and that its practical effect would be to make it harder — but not impossible — for federal officials to enforce new gun control measures.

The push to steel Texas against federal rules comes amid several instances of gun violence nationwide — including a shooting in Bryan on April 8 and another in Austin on Sunday. The longstanding debate in Washington, D.C., over gun control has reignited, moving Democrats in Congress and the White House to call for an assault weapons ban and stronger background checks, among other changes.

“We need to erect a complete barrier against any government official anywhere from treading on gun rights in Texas,” Abbott said during his annual State of the State address in February.

If the legislation passes, Texas would join Alaska, Idaho, Kansas, Wyoming and Arizona – along with more than 400 local governments in at least 20 states – in declaring themselves sanctuaries for gun rights.

“This is what I’m seeking for Texas — a law to defy any new federal gun control laws,” Abbott said in a tweet April 7 about Arizona’s recently approved new law. “I look forward to signing it.”

So what impact would the law have if Congress passes stricter gun laws, like ones floated by President Joe Biden last week?

The sanctuary law would not allow Texas to nullify or override federal gun laws, said Sanford Levinson, a University of Texas School of Law professor. Instead, “what they can say [to federal officials] is, ‘If you want to enforce them, do it yourself.”’ Levinson said.

“The practical effect, if anything, is really at the margins,” added Darrell Miller, co-director of the Duke Center for Firearms Law. “It doesn’t mean the Department of Justice can’t enforce federal firearms laws in the state of Texas. It just makes their job more difficult, because they can’t rely on assistance from state or local government agents to help them out.”

Asked whether the governor agrees with that legal understanding, Abbott spokesperson Renae Eze said in a statement, “No state or local government resources will ever be used to infringe upon the 2nd Amendment rights of law-abiding Texans.”

Under House Bill 2622 by state Rep. Justin Holland, which cleared its first committee April 6 in a 11-2 vote, Texas state and local governments would be prohibited from enforcing or providing assistance to federal agencies on certain federal gun regulations that do not exist under state law, such as registry, license and background check requirements and programs that would confiscate guns or require people to sell them.

Abbott stopped short of Patrick’s push for mandatory background checks, but he suggested the Legislature “consider ways to make it easy, affordable and beneficial for a private seller of firearms to voluntarily use background checks when selling firearms to strangers.”

The “Second Amendment Sanctuary State Act” has yet to be considered by the full House and still requires passage in the Senate. A version filed in the upper chamber hasn’t yet received a committee hearing.

Holland, R-Rockwall, acknowledged the federal government has its own enforcement mechanisms, even as he and other Texas GOP officials tout “essentially freezing in place” state gun laws.

“We cannot control what the federal government does,” Holland said in an interview. “We’re just trying to say that anything further that restricts or erodes our rights, we will not stand for.”

“It’s a game of political chicken, but I don’t think there is any serious doubt that Texas can say, ‘You have to do this on your own,” Levinson said, adding that “it is true in a lot of places already” that state and local officials are not cooperative with federal laws.

The House last week passed another major piece of gun legislation. House Bill 1927 would nix the requirement that Texas residents obtain a license to carry handguns if they’re not prohibited by state or federal law from possessing a gun. Texans under current state law must generally be licensed to carry handguns, either openly or concealed. That approval in the lower chamber showed there was a bipartisan appeal for a cause long championed by conservative activists. HB 1927 now heads to the Senate.

“Gun violence in this country is an epidemic, and it’s an international embarrassment,” Biden said on April 8. “The idea that we have so many people dying every single day from gun violence in America is a blemish on our character as [a] nation.”

Biden called for new restrictions on “ghost guns,” which are built at home and are harder to track, and arm braces for pistols. He also instructed the Department of Justice to create a template that states can use to pass red flag laws, which generally allow judges to temporarily take guns away from people deemed dangerous to themselves or others. Such legislation has previously faced stiff opposition in the Texas Legislature.

Noteworthy in Holland’s proposal is that it threatens to deny state funds to any government agencies in Texas that enforce certain new federal restrictions, Miller said.

“Not only is this saying state police can’t help out the feds in enforcing federal gun legislation, it’s also saying the city of Austin Police Department can’t do it as well,” Miller said.

Holland said “there has to be teeth to the bill” to ensure consistent enforcement across the state.

“We can’t have standalone cities, counties, jurisdictions running around state laws as some sort of a political statement,” Holland said. Dozens of Texas counties have already declared themselves sanctuaries for gun rights.

“While there is no significant fiscal impact to state funding as a result of the bill, the impact on federal funding cannot be determined at this time because the response by federal agencies to this legislation is unknown,” the bill’s fiscal note reads.