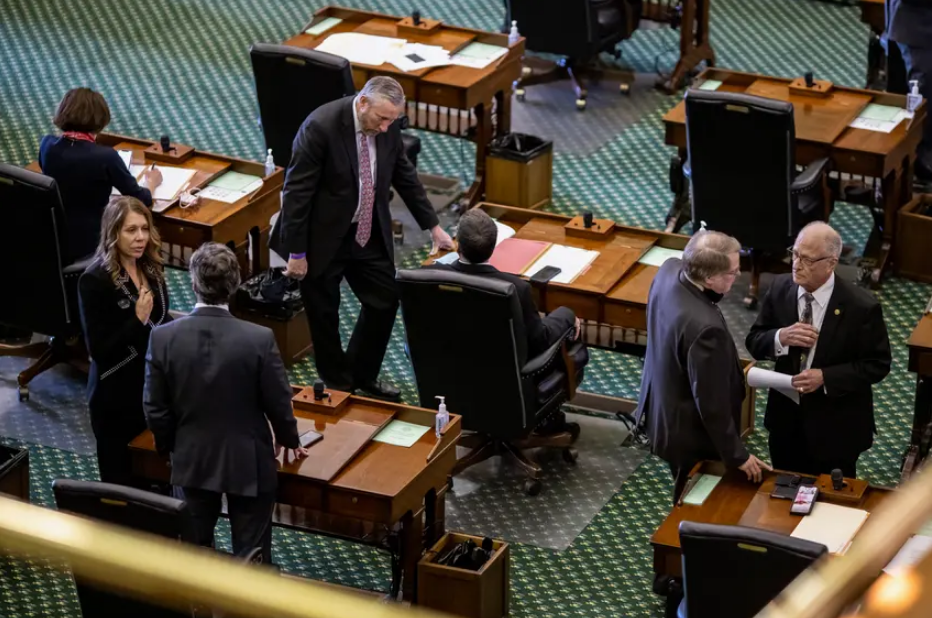 This legislative session began quietly in January, during the state’s worst peak of cases, hospitalizations and deaths from the coronavirus. With just six weeks left of the 140-day regular session, and the pandemic down to a pre-surge level, the pace is quickening.

Legislators are still working on the big problems that were apparent at the beginning — pandemic, voting and election laws, policing and the state budget among them. And they’ve added the disastrous electrical outages during a five-day February freeze that killed more than 200 Texans.

Their list of big and not-so-big things that still need doing is long and varied. The Texas Senate has been racing through Lt. Gov. Dan Patrick’s priority legislation in the last few days, but the obstacle course known as the Texas House is still ahead.

The state budget is on track, but what looked like a belt-tightening budget back in January has changed considerably, as the economy improved and federal COVID-19 relief came pouring in. Lawmakers started this adventure hoping to protect the improvements they made to public education two years ago; now they’re trying to figure out the best way to use almost $18 billion in federal funds directed to public and higher education. That’s on top of $16.7 billion in federal COVID-19 funds intended for the state itself.

Schools want that money to catch students up on “learning loss” that has resulted from a year of classes disrupted by virtual, half-virtual and face-to-face classes. Many of them hope to get it in time to help with summer school.

And lawmakers want to handle problems like that themselves, instead of leaving them to the governor and the executive branch. Before their time in Austin runs out, they’re looking at legislation that would require a governor to get lawmakers to Austin if emergency executive orders need to run longer than 30 days. They’re talking separately about small panels of legislators who would need to be consulted before the state spends any federal relief funds during times when the Legislature is not in session.

Both the House and Senate have passed legislation they hope will prevent the kinds of regulatory and market failures that caused the outages during the hard freeze that swept Texas in February. But they’re not the same, and that needs work.

The legislative wishes still ungranted — everything from casinos to unlicensed handgun carry to police reform — are formidable. That’s a regular feature of the last weeks of a session, but it’s made harder by the slow start and the difficulty of conducting a very social process — legislating — during a dangerous and highly contagious pandemic.

Those constraints show in the work lawmakers aren’t doing as much as in the work they’ll complete before they leave.

An easy example: The House passed a bill delaying reviews of a dozen and a half state agencies for two years. Those “sunset reviews” are periodic examinations; technically, agencies go out of existence — the sun sets on them — if legislators don’t review them and set new deadlines. It would be a must-do job, except that legislators can postpone the work by extending the deadlines to the end of the next legislative session.

That means, in turn, that issues that might have been attached to those bills — gambling issues to the Racing Commission, for example — have one less road to consideration.

Sunset bills are magnets for special interests working to change or protect the agencies that most affect their industries or businesses. They can become time-consuming feeding frenzies. If House Bill 1600 passes, lawmakers won’t have to worry about all of that until 2023, giving them some breathing room in a session that’s almost two-thirds complete.

They don’t have to worry about redistricting, either, which would normally have been one of the biggest chores of this session. The pandemic-delayed U.S. census means the numbers used to draw political maps in Texas won’t be available until Sept. 30. The mapmaking has to wait until after that.

Some things won’t. The governor has said he’ll keep lawmakers in town until they’ve made winter electric outages much more unlikely. The state has to have a budget. Voters have demanded and legislators have promised much more.

This is the final sprint. The must-dos have a way of getting done. As for the rest, wait and see.