Please ensure Javascript is enabled for purposes of website accessibility This singing principal of viral video fame wants students to know they are loved. A call from Oprah would be nice, too. - Mid Year Media Review
Skip to content 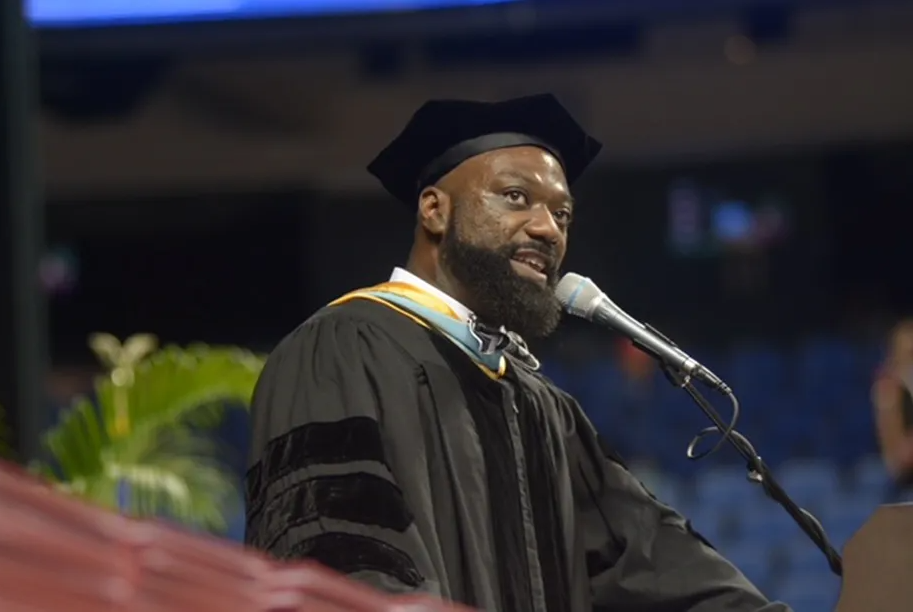 Every day during morning announcements, Marcus Gause, principal of T. Wingate Andrews High School in High Point, N.C., reminds his students that they are loved. On graduation day last month, he reiterated that message.

The graduates heard it, and they weren’t the only ones.

Gause’s rendition of “I Will Always Love You” — a ballad made famous by the likes of Dolly Parton and Whitney Houston — sent chills, cheers, and tears through the crowd. A video of his pitch-perfect performance went viral, with millions of views on social media, and praise from hip-hop artists, including Diddy.

Gause had serenaded students at talent shows and senior banquets, but only now is he getting worldwide recognition. Lately, he’s been asked to sing at professional sporting events and pageants. And he dreams of performing one day alongside his musical idols, such as Fantasia or John Legend, or getting a call from Oprah.

“My kids would be so impressed,” said Gause, who spoke recently with Chalkbeat about leading a high school through COVID, teaching his students to believe in themselves, and why he thinks his graduation performance resonated so widely.

What has this past year looked like for you? How have you supported your students and staff during these unprecedented times?

I believe there is a sixth sense to educating that comes to light from our interactions with students. Not being in their presence took away our ability to impact them as we did previously. For example, we would know when a student was having a difficult morning by their body language or facial expression when they first entered the building. The pandemic made that extremely challenging to do. To get through it, we had several “Fun Fridays” where we logged on to our learning management system and went live on our social media platforms to have dance parties and competitions, virtual awards ceremonies, games, exercise, and wellness check-ins. We facilitated food drop-offs and pickups for students and families experiencing food insecurities. My staff and I also conducted porch conferences where we went to the home and held social distanced meetings for students who were not logging on to their classes regularly.

Why did you decide to sing to your students — and how did you choose that particular song? What do you hope the lyrics conveyed to graduates?

Four years ago, I heard so many negative things about Andrews High School. I met with the entire school and was very transparent about what I had heard and challenged them to believe that we were better than that. The word “believe” became our motto and helped us to transform the school culture. My personal belief was that love is the answer to all situations, so every day, I would end announcements with: “Guys, if no one has told you that they love you today, it is indeed my privilege and my pleasure to be the first to let you know that someone loves you in Red Raider Country and that somebody is me!”

During my first year as principal, a student asked me what they needed to do to become valedictorian, and I explained to her that she was ranked No. 10 and would need to keep working hard. She believed she could, and so she did. She became our Class of 2021 valedictorian. When it came down to choosing the song for graduation, I wanted it to encompass our beliefs, the love we have for one another, and after having lost so much due to the pandemic, a song that would express how I wanted their future to go. When I couldn’t decide on the song, I allowed the valedictorian to choose because she was the evidence and an example of what happens if you simply believe! https://www.youtube.com/embed/9OlTs-oW8c0

Why do you think the video resonated with so many people?

I think the pandemic took a lot from people, but I think it also allowed us time to reprioritize things of importance. One of those was love — both giving it and receiving it. I think that it was so well received because it was expressing authentic love that keeps us all going!

You have quite a voice. Did you ever consider becoming a professional vocalist?

I have thought about it but never really pursued it. I actually tried out for “Sunday Best” in Chicago years ago but only made it to the second round. Now, it looks like I might still have a chance to live out that dream.

Tell us about your own experience with school and how it affects your work today.

I have attention deficit disorder and was not diagnosed until college, which I barely had the grades for. While I wanted to perform well, I lacked focus. Personally, my parents were divorcing during my middle and high school years, so that was hard. In school, I was always doing things I had no business doing, but I had one teacher that loved me enough not to take any junk. She was tough, but it was obvious that she cared about me. Her name is Mrs. Jeanette Mintz, and I try to be that type of love I needed and received from her during that time. My goal before instruction is to make sure that every student and staff member feels loved and appreciated every day!

What’s the best advice you ever received — and how have you put it into action?

My father once told me that sometimes you have to take the step even when you don’t see the staircase. That means there are times in life where it doesn’t make sense, but you have to have the faith to give it a try. Sometimes the obstacles in education seem insurmountable, but if I sit back and do nothing, I know what the outcome will be. However, if I take the proverbial step of faith and try something, the possibilities are limitless. I try to love without limits, and I set out every day to achieve what may seem impossible!

What’s one thing you’ve read that has made you a better educator?

I think that becoming a better educator involves becoming a better you! I recently read a book titled “Do It Again” by Cammie J. Cummings. The book reminded me that I was made for this and not to get defeated but rather to embrace the challenge of dreaming again — this time bigger and better than before! While I love what I do, it’s not void of challenging days and situations. On my worst days, I only have to simply believe again! A changed mind changes outcomes and destinations.

This summer has already been extremely eventful. I have been honored to perform at a national dance competition, High Point Rockers baseball game, and the Miss North Carolina pageant! I will be doing a PBS interview in August and hope to be finalizing some out-of-state performances in the next few weeks. I would love to sing with some of my favorites, like Fantasia, John Legend, Chris Stapleton, and Kirk Franklin. This summer would be even more amazing if I got a call from Tyler Perry, Kelly Clarkson, Oprah! My kids would be so impressed!

I love four-wheeling, so my family and I plan to do a lot of that this summer.

This article was originally posted on This singing principal of viral video fame wants students to know they are loved. A call from Oprah would be nice, too.