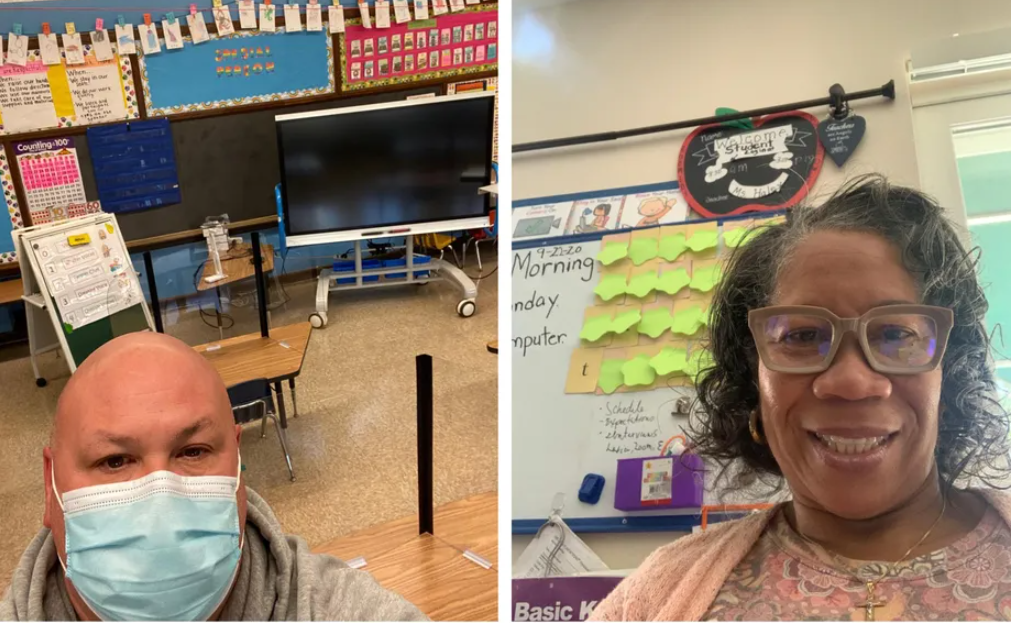 Valerie Haley has been teaching kindergarten for 26 years, the last seven at William Rowen Elementary School in West Oak Lane. She is saddened that she has only seen through a computer screen the children she has been teaching since September, and that they are missing out on one of life’s sweet rituals, kindergarten.

Still, she thinks that beginning in-person school at this point in the school year “is a waste, a waste of money.”

“They should have chalked this year up and continued to let us go virtually and stay safe,” she said.

Dan DiMartino, who has more than 20 years of experience in early childhood education and is now a kindergarten teacher at Shawmont Elementary in Roxborough, said he’s happy to be going back. On Tuesday, he already was in his classroom getting supplies.

“I’ve wanted to go back since September. If the district had done its duty and made the schools safe, we would have been back,” he said.

As the Philadelphia school district prepares to reopen its school buildings for the first time in nearly a year, teachers are experiencing a range of emotions. Some, like Haley, are anxious. Others, like DiMartino, are excited. This is the school district’s fourth attempt to open its buildings to some students for some in-person learning.

The reopening will occur in phases, with teachers returning to 53 schools Wednesday, and students in prekindergarten to second grade coming back on March 8. The district plans for the next two cohorts of schools to start hybrid learning on March 15 and March 22 after the buildings are thoroughly vetted for safe conditions by the Philadelphia Federation of Teachers. The partial reopening plan was originally scheduled to begin Feb. 8 for teachers and Feb. 22 for students, but was pushed back when the union invoked a mediation process to assure that school buildings meet rigorous safety standards.

Mayor Jim Kenney and Superintendent William Hite announced the results of mediation on Monday, presenting the first group of schools as those that were certified by the PFT’s environmental scientist as fit for reopening.

At his weekly press conference Tuesday, Kenney said that his message to teachers concerned about returning to school buildings is to tell them that “your union is comfortable and confident” that the schools being open are safe.

“I would urge them to go back and [to] get the vaccine,” he said.

Kenney said again that no one wants to punish teachers who don’t return to work. “Everything I’ve heard from the superintendent and board is that there is no desire to be punitive.”

PFT President Jerry Jordan has called the plan to come back the result of a painstaking process that is “ensuring the safety of our members and the young people we serve,” but the WE Caucus, which has challenged Jordan and his team for leadership, disagrees.

Monday’s reopening announcement “has destabilized educators and families once again,” the group said in a statement, because staff due to return were left “scrambling” to find child care and make plans to “keep family members safe.”

Plus, it doesn’t trust that the buildings actually are safe. The district “has not made any new data public to show that these 53 schools are safe,” it said. “After months of shifting plans and guidelines, along with decades of historical neglect, we cannot take [the district] at its word.”

Shawmont, DiMartino’s school, is among the 53 schools due back March 8. Rowen, Haley’s school, isn’t.

If Rowen is in the last cohort, Haley calculates, it gives her some time to get vaccinated, something that she wanted to do before returning to school. She is due for her first vaccination this weekend and would likely get her second three weeks later.

If she is called back before she can get both shots, she said she would consider using sick leave.

“My stance was I didn’t want to go back into the building until I had both of my shots,” she said. “I am anxious to go back, but only if it is safe enough, not just ventilation but the whole thing with safety.”

DiMartino has had his first shot, but said being fully vaccinated isn’t a big concern for him.

When both teachers return, it will be to two different classroom environments.

Haley said just four of her students have signed up for hybrid learning, meaning she will have only two in a classroom at once. The district’s plan calls for one cohort of students to be in person on Mondays and Tuesdays, and the second on Thursdays and Fridays, with Wednesday being virtual for everybody.

She wonders about the value of compromising her safety for so few, especially since they will still be working on computers behind plexiglass shields, hardly the typical kindergarten experience. Due to social distancing, she won’t be able to hug them, comfort them, or give them special attention, she said.

“It’s not worth it, especially to them it’s not worth it,” she said. “Some of the parents are under the assumption that all the students are coming back in. I told them ‘No, your child will probably be there maybe with one other student.’ There will be no socialization.”

DiMartino said more than half of his students selected the hybrid model, 15 out of 24. So he will have eight students for two days and seven for the other two, a critical mass that will allow for some socialization, albeit not in the traditional way.

“My argument is, I want to be here,” he said. “The PFT said my school is safe, and that’s driving the decision. And I’m a strong believer in hands-on learning. The kids need to be in school. Kindergarten is a special experience, and for a child’s whole kindergarten experience to be online, it’s sad.”

Both teachers said remote learning has limitations for early-grade students like theirs.

Haley said it is possible to help children recognize letters and numbers and start to count, “but it’s another thing to teach them to write and to understand addition and subtraction.”

“I can’t teach a kid to read on a computer,” DiMartino said.

Haley said she fears there’s not enough time in the rest of the school year to catch them up to where they need to be in first grade, although many have made a lot of progress. She marveled at how they adapted to the computer and online learning — perhaps even better than she did.

“I’m an old school teacher and not very tech savvy,” she confessed, although she said she has gotten used to virtual learning.”

For now, DiMartino isn’t sure what to expect on Monday. Usually, the first day in kindergarten is “a very happy day. Kids are emotional, parents are emotional. It’s usually a very happy day.” His practice is to “hug a crying child…but do I have to put a gown on to hug a kid?” Or is he banned from hugging them at all?

“I think I’m going to make the best of a bad situation,” he said. “This is a better alternative than being on a computer.”