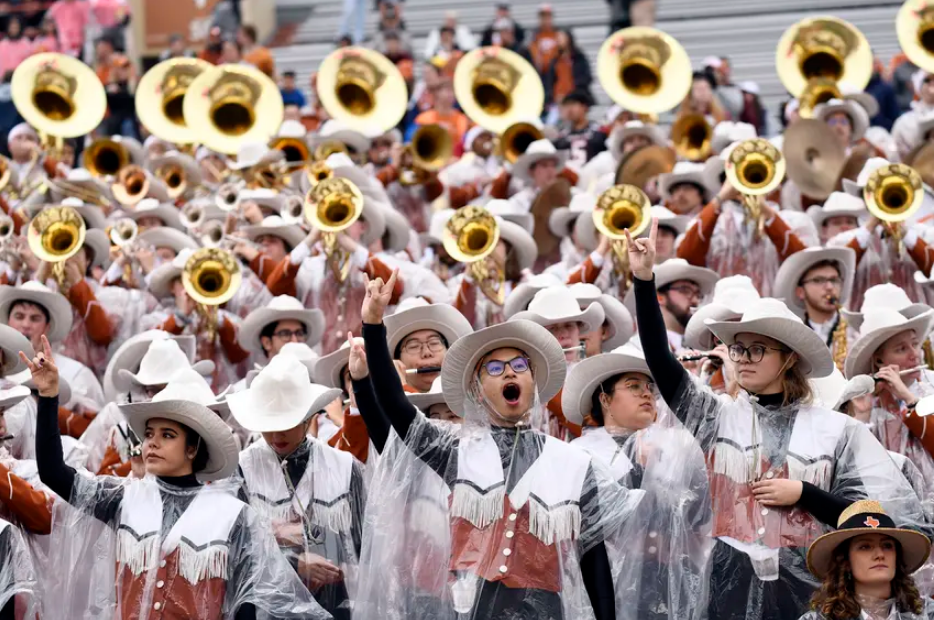 University of Texas at Austin President Jay Hartzell on Monday publicly defended the school’s decision to leave the Big 12 for the Southeastern Conference along with the University of Oklahoma in 2025 and denied Texas lawmakers’ claims that the school violated Big 12 bylaws in doing so.

“This future move is the right thing for our student athletes, our programs and our University in the face of rapid change and increased uncertainty,” Hartzell said.

Hartzell’s comments came during the first hearing of a special Senate committee created to study the conference shakeup’s impact as it became apparent the flagship university was maneuvering to leave the Big 12 Conference. The move could drastically affect the remaining Texas schools that are part of the Big 12 — Texas Christian University, Baylor and Texas Tech.

Since news broke this summer that UT was going to join the SEC, lawmakers have worried about the impact on other Texas universities. But they have had few tools to block the move. On Monday, lawmakers criticized the president of the flagship school’s decision as being a calculated choice meant to avoid intervention from legislators during this year’s regular legislative session.

A group of Texas lawmakers last month filed legislation that would prohibit Texas public colleges and universities from switching their conference affiliations without legislative approval. But it was effectively a symbolic move because Gov. Greg Abbott didn’t place university conference affiliations on the special session agenda, which means the bill is ineligible to be passed into law.

But in regular legislative sessions, like the one that ended in May, lawmakers can pass bills about any topic they choose.

“It is timed to avoid the legislature in its legislative session, where it is structured with the power to make decisions,” said Sen. Brian Birdwell, R-Granbury.

Hartzell said that he initiated discussions with the SEC in the spring — while the regular legislative session was going on.

He disputed claims made by lawmakers and Big 12 Commissioner Bob Bowlsby that the Texas school violated the league’s bylaws by not giving advance notice of their departure.

“I want to set the record straight — we have and will continue to honor all agreements,” Hartzell said. “We have not violated any Big 12 bylaws.”

Lawmakers argue that the process was done in the dark and would have far-reaching effects on the remaining schools in the conference, notably the three that are in Texas.

“We need to make sure that when these processes go down that they’re not done in the dark of night with no consideration for other affected parties,” said state Sen. Charles Perry, R-Lubbock.

State Rep. Dustin Burrows, R-Lubbock, noted two provisions in the Big 12’s bylaws: a commitment to be part of the conference for 99 years if it lasts that long and that members should not be engaged with discussions or conduct that go against the best interest of the conference.

He insinuated that a member planning to leave the conference behind closed doors doesn’t represent a decision in the Big 12’s best interest, to which Bowlsby agreed.

Bowlsby noted that, following the decision, the best approach for the remaining eight members is to stick together. But the two flagship schools’ departure represents a major blow to the conference: They represent nearly 50% of the value in the Big 12’s television rights agreement.

The commissioner also said he isn’t aware of other schools looking to follow in the footsteps of UT and OU. If made aware of similar actions, Bowlsby said they could expect a similar letter that UT and OU received on possible violations to the conference’s bylaws.

“The innate co-dependencies that are present in college athletics conferences extend far beyond the playing fields,” Bowlsby said. “Notwithstanding the obvious breach of trust, [OU and UT] have violated the very bylaws they helped to construct.”

Hartzell said the decision to leave was motivated by a multitude of factors, including the coronavirus pandemic that has upheaved the stability and financial prospects of college athletics and a recent Supreme Court decision allowing athletes to profit based on their name, image and likeness. The changing landscape of college athletics is leading schools to find new methods of revenue.

“We came to view that due to the changing landscape of college athletics and the strong position of the Southeastern Conference, that the SEC might be a better home for the University — providing us with greater certainty and less risk,” Hartzell said.

He said that joining the SEC would provide the highest level of visibility for athletes, tougher athletic competition and stadiums that closely resemble the size and capacity of Texas. He also noted that the decision can reignite the school’s athletic rivalry with Texas A&M, which declined to provide testimony at the hearing.

But Perry argued that UT should have stuck around to strengthen the Big 12.

“If you’re as big and great as you think you are, you should have made the Big 12 equal or better than the SEC, and you didn’t do it,” Perry said.

Officials from the three Texas schools also part of the Big 12 — Baylor University, Texas Tech University and Texas Christian University — spoke during the hearing Monday afternoon. All three emphasized the toll this departure would take on the schools and surrounding communities.

Baylor President Linda A. Livingstone said her focus is to ensure the athletic and academic strength for the state, the Big 12 conference and the schools affected.

She said these schools losing Power 5 status threatens the livelihoods of the communities they represent, noting a study from the Perryman Group last week that said thousands of jobs could be impacted by the departure, regardless of whether the conference dissolved.

The report was paid for by Lubbock’s Chamber of Commerce.

“Many of these businesses rely on those types of activities in our communities to carry them through the year financially and successfully,” Livingstone said. “So, the prosperity of many Texans is at stake as we think about this.”