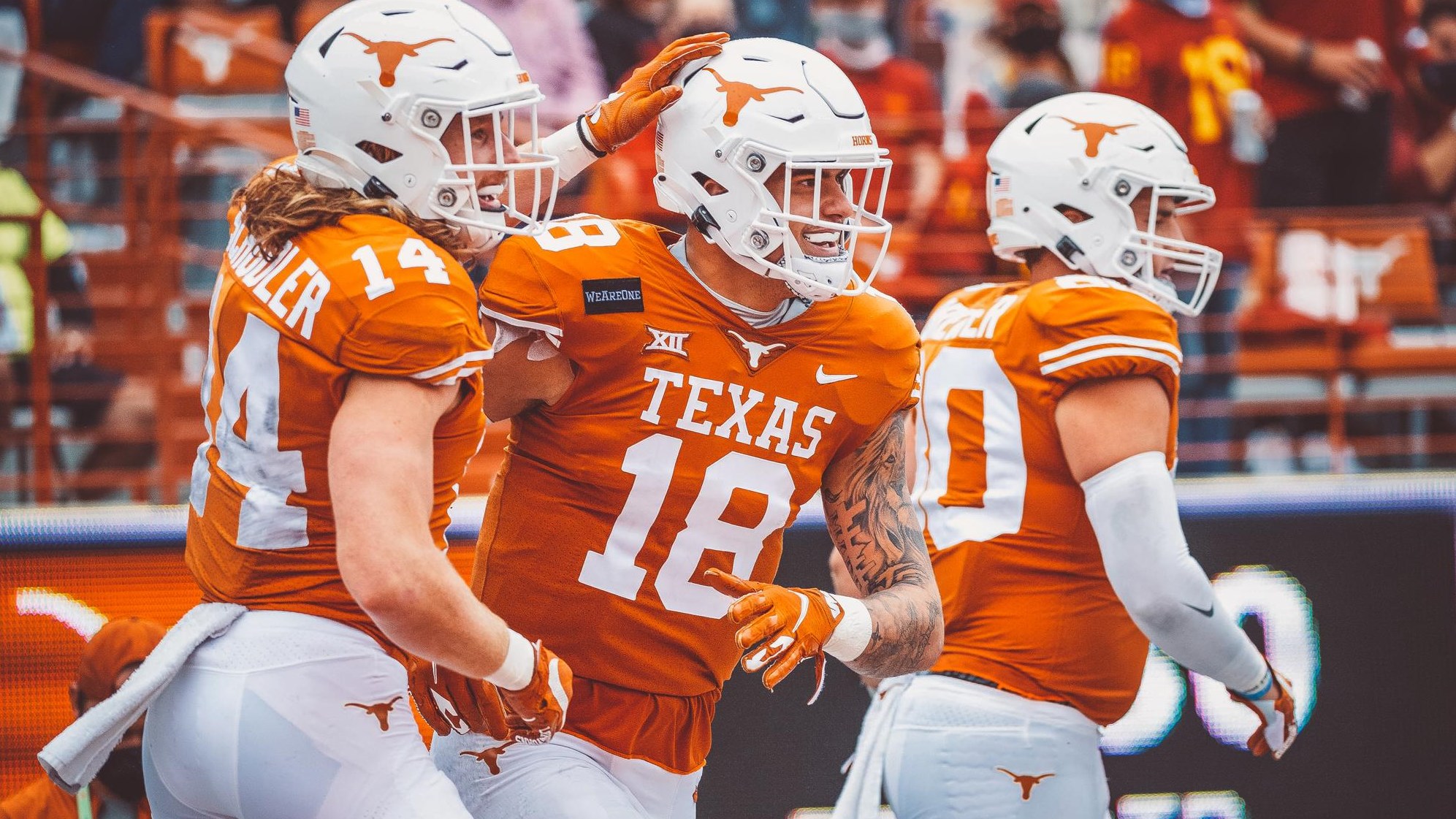 Previously, some student athletes had chosen not to participate after multiple games, as the song had become a flashpoint over the summer — especially for Black student athletes — given the alma mater song’s historical ties to campus minstrel shows.

The football players said athletics officials, in a meeting with the players after the Oklahoma game, referenced emails from donors who said the protests could impact their job prospects after graduating. At least one other player, former defensive back Caden Sterns, made a similar claim in a tweet on Monday but declined to be interviewed.

“They said y’all don’t have to sing it. But y’all have to stay on the field. Y’all have to go over there and at least show fans appreciation for coming out and watching you guys play,” said junior linebacker DeMarvion Overshown in a Tuesday phone interview.

Athletic Director Chris Del Conte said Wednesday he had not heard donors or alumni had threatened job opportunities, adding that he was concerned that players had that impression. He denied players were forced to stay on the field.

“We simply asked for their help — no one was forced or required to do so,” he said in a statement.

But the players said the mandate showed them that university officials prioritized donor wishes over the members of the team, some of whom had been vocal in the opposition over the summer and fall about their rejection of the song.

“It was really eye opening,” Overshown said. “These are some high-power people that come to see you play and they can keep you from getting a job in the state of Texas. It was shocking that they said that. To this day I still think back to the moment. They really used that as a threat to get us to try to do what they wanted us to do.”

A second player, who was on the team during the 2020 season, shared a similar recollection of the meeting with the Tribune. That player asked not to be named, for fear of retribution by the university and donors. He said it was Del Conte who told players that donors were unhappy and threatening to pull financial support.

“He kept saying these guys provide this for you. … He was mentioning, ‘We have donors talking about pulling out money from the south end zone [stadium addition project], stopping their donations,’ the second player said.

Overshown declined to name the athletic officials, but the second player said it was former head coach Tom Herman and Del Conte who relayed the donor sentiments.

Del Conte denied that he had said any such statement or that donors had relayed those comments.

“I never said this, nor would I say this to a student-athlete, and I’ve never heard it from any donors or alumni. My message has consistently been about unity. I’m disappointed if anything anyone else said to our student-athletes caused them to feel this way. That concerns me,” he said in an emailed statement. “I’ve talked to several student-athletes about this and am happy to talk to anyone to let them know that this is not true. I’ve only seen our alumni work to support our student-athletes.”

Herman, who left the university after he was fired in January, could not be reached for comment.

The Dallas Morning News previously reported that students were told to stay on the field for “The Eyes” at the meeting with Del Conte and Herman after the Oklahoma game, when former quarterback Sam Ehlinger made headlines for standing alone on the field during the post game tradition when players typically sing the alma mater song with fans.

At the time, Del Conte said he was clarifying his expectations for players.

“I do want to clarify that I have had many conversations with our head coaches outlining my expectations that our teams show appreciation for our university, fans and supporters by standing together as a unified group for ‘The Eyes,’ while we work through this issue,” Del Conte wrote in his weekly message to fans at the time.

“My teammates and I got threatened by some alumni that we would have to find jobs outside of Texas if we didn’t participate,” he wrote.

Sterns declined to comment for this article, saying he was focused on the NFL draft.

“I got nothing but love for UT and Texas, just wanna help make it a better place as much as I can,” he said to the Tribune via direct message on Twitter.

His tweet was a response to a Tribune article that revealed at least 75 alumni and donors sent emails to UT-Austin President Jay Hartzell threatening to pull financial support if the university got rid of the “Eyes of Texas.”

The song has been the center of a firestorm since last summer, when athletes and students called on the school to stop singing it after games. The song — played to the tune of “I’ve been working on the railroad” — was historically performed at campus minstrel shows, and the title is linked to a saying from Confederate Army Commander Robert E. Lee.

Overshown, who has been among the more outspoken players, briefly boycotted team practice in early July, but returned after UT-Austin announced a series of changes in response to calls from students about improving racial equality on campus.

Emails obtained by the Tribune in a public records request showed many alumni, donors and fans were outraged by images of Ehlinger alone after the Oklahoma game for the postgame song. The rest of the team had retreated from the field. (Ehlinger later said he was only lingering alone on the field to talk with coaches.)

“The pictures I am seeing on social media of Sam Ehlinger standing alone after the game with his horns up to the fight song has sickened me,” one person who identified as a 25-year season ticket holder wrote to Hartzell. Their name was redacted by UT-Austin, citing open records laws that protect certain donor identities.

“These young men came to the university knowing fully well what was expected of them…..one of these things has ALWAYS been to respect the university and its traditions. Love it or leave it. How dare they accept scholarships and disrespect this university with their pettiness…”

“You tell those ‘students’ who don’t want to play, they are out of the band and let the others play,” wrote Linden R. Welsch, class of 1969, to Hartzell after it was announced the Longhorn Band wouldn’t play the alma mater after the football game against Baylor University. “This is the same problem you have with the football team. You have let the inmates run the asylum. You let political correctness/ social justice or whatever take over and have lost control. It is stupid and demonstrates a total lack of leadership.”

Welsch, who The Alcalde alumni magazine calls a “Life Member” university donor, told the Tribune the email summed up his concerns and he did not have any additional comments.

On Tuesday morning, Hartzell released a statement responding to the Tribune’s article on the donor emails.

“People who target our students with hateful views do not represent the values of the Longhorn community,” he said. “A few extremist views in the sample of emails the Texas Tribune reported on do not speak for the 540,000 proud Longhorn alumni who actively support our students and university. Out of the many emails I received this fall, a very small number included comments that were truly abhorrent and hateful. I categorically reject them, and they bear no influence on any aspect of our decision-making.”

Of the 300 emails sent to the president’s office between June and October, only 11 explicitly urged Hartzell to rid the school of the song. Some 70% pleaded and demanded the song stay. The rest did not express an opinion to remove or keep the song.

UT-Austin senior Connor O’Neill, a co-director of the Longhorn Athletic Agency, a group that provides a voice for student athletes within student government, said student leaders were largely unsatisfied with Hartzell’s statement.

“President Hartzell basically said these were just a few of thousands of fans, but the issue there is you know those few people are the ones with a lot of power,” he said. “They are the donors giving millions of dollars and the ones that are saying ‘shut up and dribble.’”

Hartzell said the Eyes of Texas History Committee, which was organized to study the song’s history, will release its report next week. He said the university community can continue the conversation about the song when “equipped with a common set of facts.”

Two weeks after the team meeting last October, the Texas Longhorns played Baylor University in Austin and won. After the game, the entire team walked over to the fan section to listen as an audio recording of “The Eyes of Texas” played. The Longhorn Band couldn’t find enough members to play the necessary instruments, another controversy that spurred another flurry of angry donor emails.

For Overshown, standing on the field after the Baylor game was another moment of clarity.

“It made me realize what money will make people do here,” Overshown said. “The fact that somebody said they had our backs 100%, but yet it comes to money and the donors and what they want, then it’s a completely different story.”

As the song played, he took a knee.