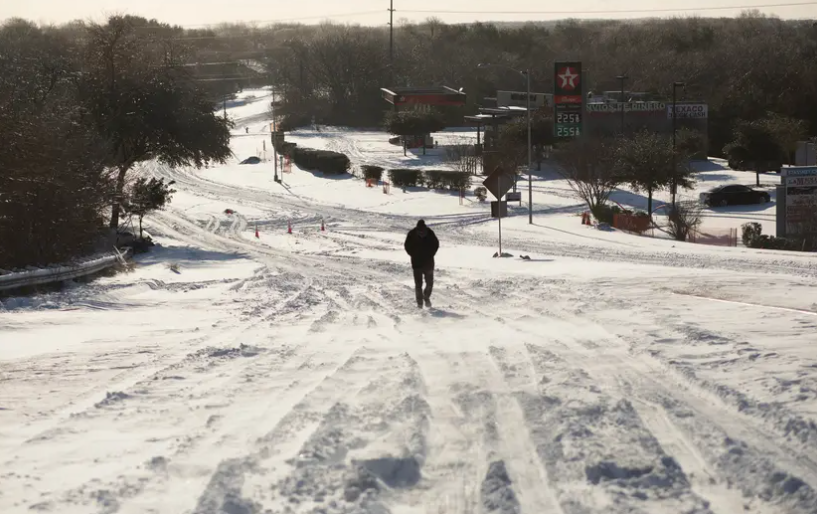 As temperatures began to plummet across Texas on Sunday night, residents were warned that they could face short-term, rotating power outages to prevent the entire electricity grid from going down. Instead, significant swaths of the state’s largest cities were left cold and in the dark without power for more than a day — with no end in sight for many people.

And as people continued scrambling to find a safe, warm place — often by traversing already dangerous roads — more bad weather is bearing down on regions across the state. Counties in and around North Texas could get up to six additional inches of snow accumulation, while the Houston area braces for freezing rain. Oncor, the largest electricity provider in the state, tweeted Tuesday night that the state’s power grid operator had directed more reductions in the electric load, and residents should “please be prepared for additional outages.”

“Were we blindsided by the storm? No. Blindsided by the power outages and total lack of planning? Absolutely,” said Shannon Bentle, whose parents have gone without power in Sugar Land since Monday morning.

Michael Webber, an energy resources professor with the University of Texas at Austin, said state officials “dropped the ball” by not giving people useful advice on what they would soon face.

“What should have been said for several days is this is going to be rough, make sure your car is filled with gasoline, make sure you charge your cellphones … get firewood,” Webber said. “The governor’s office didn’t say that, [the Electric Reliability Council of Texas] didn’t say that.”

When asked about how things were communicated, a spokesperson for the Gov. Greg Abbott deferred to the governor’s public comments.

Between Sunday and Monday, areas around Texas saw between two and nine inches of snow and millions lost power. Some people have trekked through ice and snow to get to hotels that quickly booked up, citywide warming centers or loved one’s homes — despite the threat of the ongoing coronavirus pandemic. Many more have huddled in their homes watching the thermostat drop, unable to leave thanks to slick roads.

On Monday, Abbott and ERCOT, the power grid operator, celebrated the return of power to hundreds of thousands of Texas homes and noted the situation was improving. But by Tuesday morning, the number of businesses and homes without power was reportedly around 4 million.

“I’m frustrated that going into [Monday] night we had the state telegraphing messages that we were getting power back to folks when it wasn’t enough people for it to be meaningful,” said state Rep. Erin Zwiener, D-Driftwood. “The trendline for power availability was clear when it was still light out, and not telling people the truth about the direness of the situation meant that folks who might have had the opportunity to get somewhere with heat didn’t have that opportunity and were panicking last night.”

ERCOT leadership told reporters Tuesday that there was not as much progress in increasing power supply as was hoped, and that there could still be setbacks in restoring the full grid. The grid operator said that the primary cause of outages appeared to be generation failures with natural gas providers.

Abbott and other lawmakers Tuesday slammed ERCOT for the prolonged power outages and called for resignations and an investigation. City and county government officials said they were not told of the potential for dayslong outages and weren’t given information from the state on when their constituents may get power back.

“My best insight is it’s not going to get any better and everyone should prepare to be without power,” Zwiener said.

During a Tuesday afternoon press conference, Austin Mayor Steve Adler said that city officials are planning for temperatures to remain below freezing for much of the next few days.

“If you can shelter in place, we’re asking that you do so,” Adler said. “If you can’t, then we ask that you make that decision now and start getting to a place before it gets to be dark because driving and walking become more dangerous in the evening.”

San Antonio, Austin and Fort Worth announced plans for partnering with local transportation services and police departments to provide rides to emergency warming shelters. Fort Worth residents can call the city’s emergency operations center at 817-392-1234 to request assistance, and people in Austin and San Antonio can dial 311 to ask for a ride to a warming center. Available space in warming centers around the state remains extremely limited, so public officials have asked Texans to reserve spots for the neediest individuals.

But residents have responded with frustration over the choice between staying in a frigid, powerless home or risking exposure to the coronavirus for their elderly or high risk family members. Bentle, the Sugar Land resident, told The Texas Tribune that both she and her nearby parents have gone without power — and without cellphone service.

“Warming centers are great — but our choice is take our parents to a place full of people where they can get COVID, or leave them in their home to freeze,” Bentle said.

And to make matters worse, she said, people located outside of major cities may live too far away from any kind of warming center or shelter.

Officials in cities across the state have asked residents to check on their neighbors and offer up their homes as a place to shelter if they have power. An emergency management spokesperson from Fort Worth said that the city received no warning or information about the potential for prolonged power outages, and warming centers currently do not have anywhere near the capacity to house anyone who has lost power.

“The message for everyone in the city is check on your neighbors,” the Fort Worth spokesperson said. “See if you have someone that might need help, and [if] you are capable of providing that assistance, this is a perfect time to reach out to your neighbors and check on them.”

Tuesday afternoon, Houston Mayor Sylvester Turner also tweeted that the city’s shelter at the George R. Brown Convention Center had reached capacity, but several churches and businesses offered space for people to get warm. Turner said the city was working on transporting additional residents in need of a place to stay to those locations.

However, Bentle pointed out that most updated information about resources for those in need during the storm has come via social media, and many elderly residents and those with disabilities don’t have that kind of access to technology.

“This situation is untenable. People cannot do this for another night and we have zero answers from anyone,” Bentle said.

This article was originally published on With more dangerous weather approaching, Texans say officials didn’t warn them about going days without power