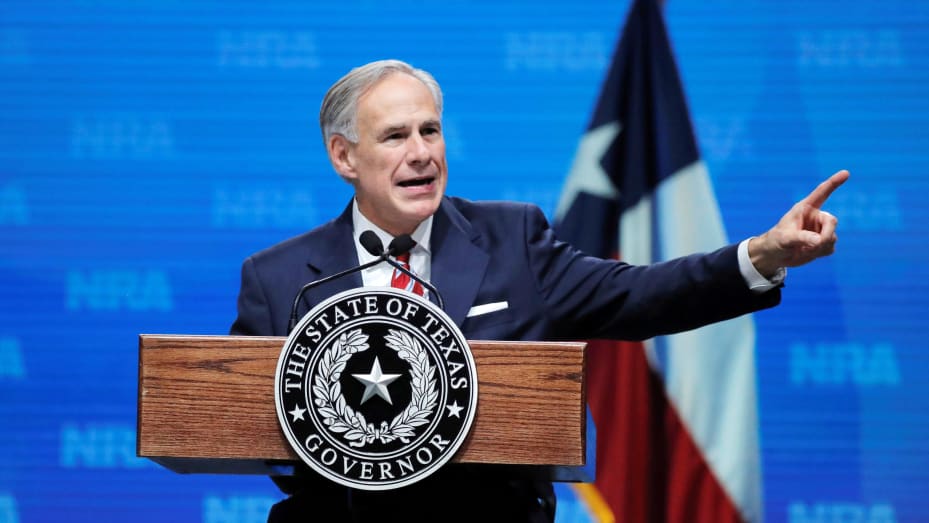 Gov. Greg Abbott has been unwavering lately in his refusal to implement statewide safety precautions to slow the spread of the coronavirus.

But as cases and hospitalizations are reaching heights not seen since February, Abbott’s pandemic playbook in recent weeks has largely focused on blocking local mandates and committing to protecting the rights of the unvaccinated.

Abbott recently declared Texas is “past the time of government mandates.” And he unveiled a second special session agenda Thursday that includes ensuring kids can return to school in person this fall if they want to, without any mask or vaccine requirements — a move that came after the U.S. Centers for Disease Control’s updated guidance that recommends “universal indoor masking by all students.”

Abbott, who has publicly advocated for vaccinations and got his shot on TV, summed up his current mentality toward the pandemic during a speech Wednesday in Dallas that focused on the economy and other issues facing the state. On the pandemic, he started off by encouraging vaccination and calling it the “surest way to end the pandemic.” But then he made one thing clear.

“Going forward, in Texas, there will not be any government-imposed shutdowns or mask mandates,” Abbott said. “Everyone already knows what to do.”

Abbott started shifting his emphasis to personal responsibility over government intervention after ending his own statewide mandates earlier this year, but he’s been doubling down on that position in recent weeks as the delta variant has wreaked havoc across the nation and renewed calls for stricter safety precautions.

The numbers have prompted even the state health department to ring the alarm in a way that Abbott has not, tweeting Wednesday that Texas is “facing a new wave” and the variant “has erased much progress to end the pandemic.”

The hamstringing from the state is again frustrating big-city leaders, mostly Democrats, who want to have more power to fight the virus.

“The only other option is to violate the governor’s order, and that causes a great deal of confusion and in all likelihood [will] lead to lawsuits,” said Nelson Wolff, the usually mild-mannered Bexar County judge. “I think his order provides that if a public official attempted to do that, he can be fined and removed from office. If anybody needs to be removed from office, it’s the governor.”

While Wolff said Bexar County was not ready to defy Abbott, some local governments already have. Houston Mayor Sylvester Turner announced Monday that the city’s almost 22,000 employees will be required to wear a face covering inside city buildings where social distancing is not feasible.

With Abbott’s latest hardened resistance to new virus-fighting measures, his critics see politics at play. They note the primary opposition he has drawn in his 2022 reelection campaign and the national pressure for GOP governors to lead the way in keeping their states open.

At the same time, Abbott has shown intense interest in stopping the spread of COVID-19 among migrants coming into the state via the Mexican border, part of a ramped-up crusade against illegal immigration since President Joe Biden took office. Abbott has issued an executive order telling state troopers to pull over drivers transporting migrants “who pose a risk of carrying COVID-19.” A federal judge blocked the order Tuesday.

That is all despite increasingly alarming coronavirus numbers in places like Texas. New daily cases and hospitalizations have been on a sharp upward swing, reaching levels not seen since the last surge in the winter. The state’s positivity rate — the percent of virus tests coming back positive — was 17.7% on Tuesday, well above the 10% threshold that Abbott has previously identified as a danger zone.

Even more, several of the state’s hospital regions have seen the percentage of COVID-19 patients comprising their capacity rise above 15%. That was the threshold that was once used to let local officials roll back business reopenings in a region — until Abbott effectively gutted it with his latest executive order.

“I think it’s pretty clear in the data that Texas is in the middle — or beginning, depending on how you look at it — of a really major pandemic surge, and not just in case counts but particularly in looking at health care needs across the state,” said Spencer Fox, associate director of the COVID-19 Modeling Consortium at the University of Texas at Austin. “Many regions are now facing numbers that we haven’t seen since the winter.”

Fox attributed the rising numbers to the state’s “lagging” vaccination rate of 44% — toward the back of the pack nationally — and Texans returning to their pre-pandemic lifestyles.

“Right now, just in general people are acting as close to normal as any point in the pandemic,” Fox said.

The coronavirus situation in Texas, as well as Florida, has increasingly caught the attention of the White House. During a briefing Thursday morning, Jeff Zients, the White House’s COVID-19 response coordinator, noted that the two states, over the past seven days, have made up one-third of new cases nationwide and over one-third of new hospitalizations.

The president has also taken notice. During remarks on the pandemic Tuesday at the White House, Biden said the “most extreme of those measures” preempting mask and vaccine mandates are happening in Texas.

“I say to these governors, ‘Please, help,’” Biden said. “But if you aren’t going to help, at least get out of the way of the people who are trying to do the right thing. Use your power to save lives.”

For now, Abbott is more or less staking the fate of the pandemic in Texas on vaccination. Although the number of doses per day has been ticking up since early July, the state has considerable work to do. Its 44% full vaccination rate as of Tuesday ranks 36th nationally.

Abbott has long been an advocate for getting vaccinated, receiving it on camera late last year in Austin. At the same time, he has taken pains to emphasize vaccinations in Texas are “always voluntary.”

In June, he signed a bill into law banning businesses from requiring proof of the vaccine from their customers. That followed his April executive order banning state agencies, political subdivisions and organizations receiving public funds from creating “vaccine passports” or otherwise requiring someone to provide proof of a COVID-19 vaccine in order to receive services.

More recently, elected officials from both parties have gotten an added reason to stress vaccination: almost everyone falling severely ill from the virus is unvaccinated, according to reports from across the country.

“The bottom line is for people that are hesitant or anxious about being immunized is that you really only have two choices: You’ll either become infected or you’ll become immunized,” state Rep. Greg Bonnen, R-Friendswood, a physician, said Tuesday. “We need to communicate that as clearly as we possibly can and encourage people that that’s how we end this pandemic.”

Public health experts say the pandemic in Texas will not be helped by the coming school year, especially after Abbott’s latest order making clear that no district can require students to wear masks or get vaccinated. Abbott took that further in the second special session agenda he unveiled Thursday, asking lawmakers to effectively codify that executive order.

Fox said Texas is “trending in the wrong direction” for a safe return to in-person learning.

The Texas chapter of the American Federation of Teachers has been pushing Abbott to rescind his orders and let school districts mandate masks if they want to. On Tuesday, the chapter released results from a membership survey last week that showed that 78% — 7,384 respondents — want Abbott to let districts decide whether to require masks.

“While we celebrate a return to school, let’s not be careless and reckless,” Texas AFT’s president, Zeph Capo, said in a news release on the survey.

For Abbott, there are also political considerations. He is up for reelection next year and already has at least three primary challengers, the best-known being former state Sen. Don Huffines of Dallas and former Texas GOP Chairman Allen West. Both have long been critics of Abbott’s pandemic management — and are keeping the heat on him as the calls increase for new statewide restrictions.

“Texans need restrictions on illegals entering our State without Covid testing and violating our rule of law,” West said in a statement. “We don’t need a return to mandating behaviors of legal, law abiding Texans.”