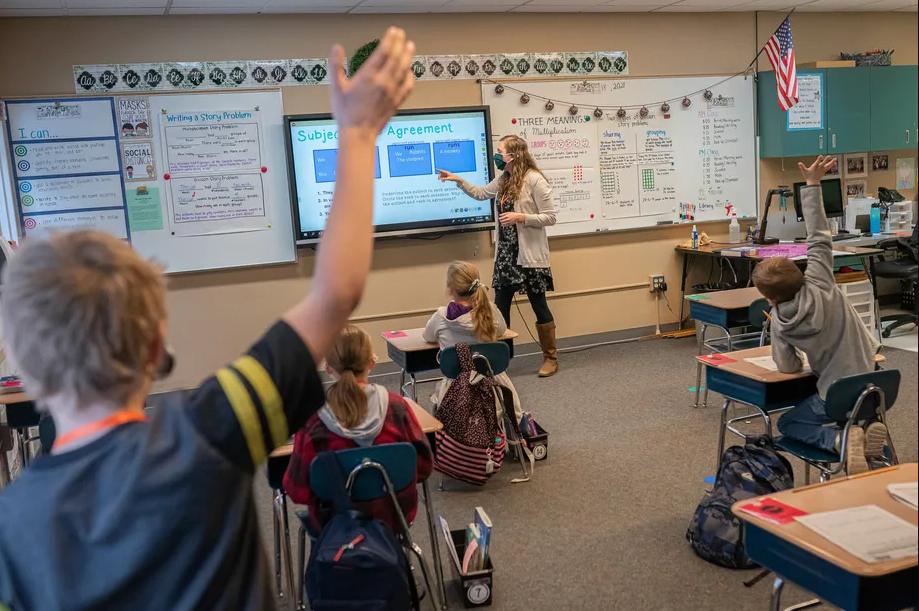 Three of the biggest names in education philanthropy have teamed up to fund a new organization aimed at dramatically improving outcomes for Black, Latino, and low-income students.

The Advanced Education Research & Development Fund, announced Wednesday, is already funded to the eye-popping tune of $200 million from the Bill and Melinda Gates Foundation, the Chan Zuckerberg Initiative, and the Walton Family Foundation. (Gates and Walton are also supporters of Chalkbeat.)

AERDF (pronounced AIR-dif) says its focus will be on what it calls “inclusive R&D,” or bringing together people with different expertise, including educators, to design and test practical ideas like improving assessments and making math classes more effective. Still, the ideas will have “moonshot ambitions,” said the group’s CEO Stacey Childress.

“One of our mottos for our program teams and the projects they fund is ‘heads in clouds and boots on the ground,’” she said.

It’s an unusually well-funded start for a new education organization, especially as big education funders have seen their influence wane in recent years after some of their ideas showed uneven results and prompted backlash. AERDF suggests these funders still have significant ambitions for improving education in the U.S., even if those efforts are less splashy — or controversial — than they once were.

The organization emerged from work that began in 2018, when CZI and Gates teamed up to invest in R&D. That resulted in a project known as EF+Math, whichfunds efforts to embed lessons in executive functioning — a set of cognitive skills related to self control and memory — into math classes.

Ben Riley, the head of Deans for Impact, which has pushed for teacher prep programs to help teachers understand the “science of learning,” said focusing on executive functioning skills is a promising idea, but he’s interested in seeing more specifics. “What does that mean? What does that translate to?”

Overall, AERDF “does seem to actually be taking seriously that research actually has to be useful to practitioners,” said Riley. “I don’t know that there has been a lot of real moneyed efforts that have done that.”

The other project that AERDF announced Wednesday is called Assessment for Good, and will focus on creating better student tests that shift from focusing on students’ deficits to their strengths, according to Temple Lovelace, who leads the effort. (Lovelace said the goal is for the tests to provide results that are useful to teachers and families throughout the year, not to replace state exams.)

Andrew Ho, a testing expert at Harvard, said he welcomed the new effort and he shares concerns that assessments can promote negative perceptions about schools and students. Low test scores could lower teachers’ expectations for certain students, for example, or encourage affluent families to avoid certain schools, exacerbating segregation.

“Does testing expose or exacerbate inequality? The answer to that is both,” Ho said.

Riley, though, sounded a cautionary note. “The question here would be: are they going to be supporting assessments, innovative and different though they may be, that are still getting at the question of what have the students learned?”

Childress said that AERDF plans to fund up to three additional projects, putting $20 million to $40 million into each over three to five years. Childress said she’s particularly interested in efforts to improve early literacy and the science of reading, though other kinds of work will also be considered.

The organization will be asking, “What are the next two to three big opportunities or challenges we should work on that students and teachers and classrooms face every day, and if we could make breakthroughs here, it could make a difference for kids?” she said.

AERDF will be organized as its own nonprofit, but it will be affiliated with NewSchools Venture Fund, a venture philanthropy organization where Childress is also the CEO.

Philanthropic efforts to dramatically improve schools at scale do not have a particularly strong track record. The Gates-funded creation and adoption of the Common Core standards met stiff pushback, and there’s little evidence it significantly improved student learning. Similarly, a pricey Gates-funded teacher evaluation project in several districts did not boost student test scores. Small high schools, another prior Gates initiative, seems to have been more successful, though.

CZI’s signature initiative, the Summit Learning program, has fallen short of ambitions to reach huge swaths of American classrooms and has not been independently evaluated. Charter schools, the focus of Walton’s giving, have overall produced highly varied results, though a number of standout networks have helped students make large learning gains.

What remains to be seen is whether AERDF’s efforts will be any more effective.

“On the one hand, it is something we should celebrate — if we are in the business of trying to improve educational outcomes and student learning and capacity — that major philanthropic organizations are going to try for ‘moonshots,’” said Riley. On the other hand, “any historical look at education would say that we have heard that promise made for literally over a century and yet we have not seen it happen.”

This article was originally posted on Big education funders Gates, Walton, and Chan Zuckerberg are coming together to seek ‘breakthroughs.’ Will it work?