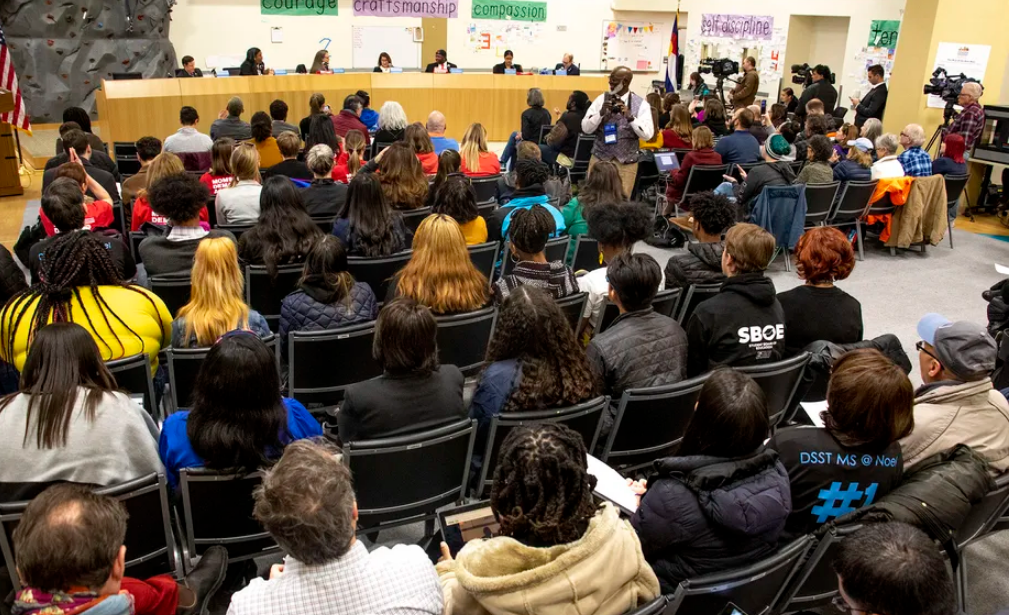 One of three Denver school board members eligible to run for reelection says she will not seek another term. Angela Cobián, who was once a Denver teacher, said her decision was inspired by her former students and what she called “a natural type of transition point.”

Although Denver Public Schools faces big challenges, including fallout from the pandemic and declining enrollment, Cobián said she’s confident that the new superintendent the board hired last month, Alex Marrero, will lead the 90,000-student district to success.

Cobián is a bilingual former Denver student who grew up in the southwest region she now represents. She said the ending of her four-year term seemed like a juncture where she could do the same thing her predecessor, Rosemary Rodriguez, did: inspire new Latina leaders to help shape policy for a district where more than half of the students are Hispanic.

No candidates have yet filed to run for Cobián’s seat, according to the Denver Elections Divisions candidate tracker, but Cobián said an announcement is coming.

Four of the seven seats on the Denver school board are up for grabs in November. One incumbent, board President Carrie Olson, has announced she is running for reelection and was endorsed this week by the Denver teachers union.

Another incumbent, board Vice President Jennifer Bacon, has not said if she will run again. Separate from her seat on the school board, which is an unpaid volunteer position, Bacon was elected to the Colorado House of Representatives last year.

The other incumbent, Barbara O’Brien, cannot run for reelection due to term limits.

Cobián was first elected to the board in 2017. As a candidate, she had the backing of education reform groups that support independently run charter schools and school choice. In 2019, the board majority flipped from reform-backed candidates to candidates backed by the Denver teachers union, which opposes the expansion of charter schools.

But Cobián said politics did not play into her decision to leave the board. She does not think of herself as a “reformer,” she said. Instead, Cobián said her policy votes were always driven by her own experience and the experiences of the families who live in southwest Denver.

When she was elected, there were already charter schools in her board district, in addition to traditional district-run schools and semi-autonomous innovation schools. “I owe it to the students and families in my district to be active and involved in all of those types of schools,” she said. “If charter schools are successful, that means my neighbors are also going to be successful.”

Cobián counts small practical changes and big policy shifts among the things she is proud of in her board service. She pushed for traffic safety upgrades to make it easier for students to cross busy Alameda Avenue. And she helped revise a controversial school closure policy to give schools with lagging test scores the opportunity to improve rather than be shuttered or replaced.

Cobián has served as the board treasurer since 2019. She’s proud of establishing a citizen budget advisory committee during the pandemic that helped decide how to cut the budget in the face of state funding shortfalls. That committee will now be permanent.

Her hardest moment as a school board member was not the pandemic or a 2019 teacher strike, she said, but rather when one of her former students was shot outside of his school. Helping his family navigate the hospital system, and then helping them decide where to send him and his siblings to school once he recovered, taught her a hard but valuable lesson.

“That experience showed me there are a lot of ways to be involved in the lives of my students at a systemic level,” Cobián said.

And she promises she will. Cobián works for the Planned Parenthood Federation of America as director of coalition advocacy, a nationwide job that she does from Denver. She also serves on the boards of several local nonprofit organizations.

After she won her school board seat in 2017, Cobián had her campaign logo tattooed on her arm. The logo was inspired by a poem by Luis Valdez that starts, “Tú eres mi otro yo,” or “You are my other me.” She said she chose the logo because when she encountered Denver students and their families, she saw them as extensions of herself. She still does.

“I will continue to think that way and act that way until we are able to not just graduate from college but be upwardly mobile people who have the agency to make decisions about our community with power,” Cobián said.