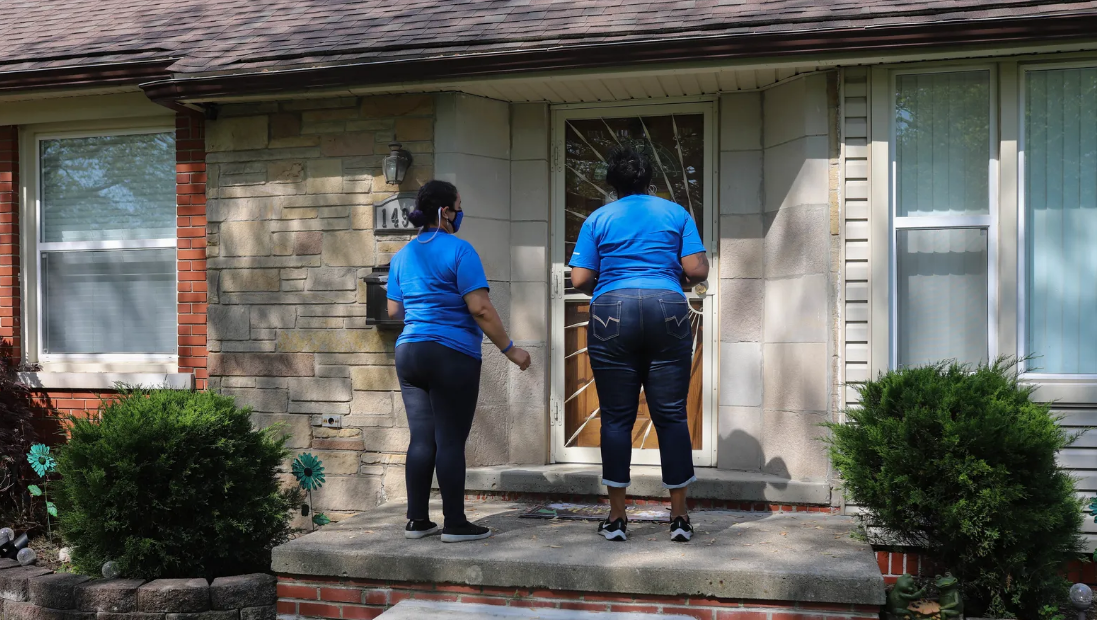 It was a warm spring morning when the Detroit school district vehicle, followed by a colorful van emblazoned with the words “Parent Academy,” pulled up outside Antione Gabriel’s home.

Before the two women from the car could reach the front door, Gabriel had come outside to greet them with a jovial smile. He had an inkling about why they were there.

“We’re looking for a student, a kindergartener,” one of the women, Sharene Nathan, said. “He hasn’t been coming to school. Is everything OK?”

Nathan and Claudia Enriquez were on a mission that late May day, knocking on doors on the west side of the city and trying to track down students who’d been frequently missing class and assignments in the Detroit Public Schools Community District.

These home visits became the centerpiece of an all-out outreach effort during a grueling school year marked by increased failure rates, low attendance, high chronic absenteeism, and major concerns about waning student engagement. The district has an additional motivation: A big decline in enrollment could eventually mean less money for a district that has worked to remain financially solvent.

As the school year drew to a close last week, district officials also were looking ahead, planning to use $11 million in federal stimulus funds to continue the canvassing efforts.

They believe the work has already paid off. While the visits have primarily been aimed at finding students who haven’t enrolled or have barely been attending class, they also have helped the district survey parents about their preference for remote or in-person learning and resolve technology glitches. And just as importantly, the visits have provided a rare, direct glimpse into the challenges families have faced with pandemic learning.

“In some cases, you see the living conditions that families are in, and you understand why sometimes societal challenges, socioeconomic challenges get in the way of prioritizing education, especially in a pandemic,” Superintendent Nikolai Vitti said.

“I would anticipate this being a regular part of our strategy over the next year or so,” said Sharlonda Buckman, assistant superintendent of family and community engagement. “We don’t even know what it’s going to take to recover from (the pandemic) yet, but we do know that there’s evidence that this strategy works.”

At Gabriel’s home — the 11th stop of the day for the canvassing duo — Nathan and Enriquez learned why the kindergartener wasn’t attending class. Gabriel’s son Amontee had been attending the district’s Emerson Elementary, but now lives with his mother and is enrolled in a school outside the district. He asked for a contact number he can call if his son returns to his home.

“That’s a good one,” Nathan said afterwards, describing the visit. “He wants information and that’s what we want to hear. We’ll have to make sure to check up on him.”

She and Enriquez, both involved district parents, fill different roles during the visits. Nathan does all the talking and Enriquez carries a tablet to take notes, flagging issues that need follow up from the district.

“This is the best thing that can be happening,” he said.

Schools across the country have made home visits a vital part of their pandemic response plans. But they aren’t new for the Detroit district or many of the charter schools that educate Detroit children.

Attendance agents in the district have for years visited homes to try to track down chronically absent students. Prior to the pandemic, teachers at 60 schools were making visits to their students’ homes.

Such visits have gone a long way toward building bridges between schools and the community, Buckman said.

“When parents and teachers are aligned, kids do better academically,” Buckman said. “This is where we do our best work.”

What’s crucial now is for schools to build on the connections made during the home visits, said Punita Thurman, vice president of program and strategy at the Skillman Foundation (a Chalkbeat funder), which has been part of efforts to help connect schools with neighborhood organizations to conduct outreach to families.

“There has to be a recognition that that partnership has to be cultivated, the trust has to be built,” Thurman said.

More than a year ago, when the pandemic caused an abrupt disruption of school across the U.S., Buckman said it was clear students and families learning online needed help. That summer, staff began conducting home visits to talk to families about their learning options for the next year.

In the fall, as concerns grew about students who hadn’t yet shown up for class, even more people hit the streets for home visits, including parents who are paid a small stipend. The effort has continued to grow throughout the school year, even on cold winter days.

“This is what it looks like to serve children and our families in the midst of a pandemic,” Buckman said.

During the course of these visits, technology problems have been the biggest barrier for students remaining engaged in school. That’s one of the reasons the canvassers have been trained to do some basic troubleshooting.

Other challenges, though, come with few quick fixes.

“We’ve had students who’ve lost parents, and the bottom just falls out,” Buckman said. “We had one parent a while back who committed suicide and left the grandmother with four or five kids. They haven’t been in school in months because mom not only lost her daughter, but she’s completely as a grandmother just overwhelmed.”

The sound of the knock echoed down the row of light gray buildings in Smith Homes, a public housing community on Detroit’s west side. First one knock, then two, then three. Then a friendly voice called out: “Detroit Public Schools wellness check.”

Nathan and Enriquez stepped away from the door and waited until the knock was answered by a 10th grader at Osborn High School. Nathan began her speech.

“I noticed that you did miss a few days in the last third quarter,” she told the teen. “Is there anything that we can do to try to help you make sure you’re moving forward and getting into that 11th grade?”

The student, Jalen Perry, looked confused, then held up his phone to the two strangers.

“I’m on now,” he said, indicating he was in class at that moment.

Jalen later explained to Chalkbeat that he prefers using his phone to take his online classes, but Nathan advised him to make sure his teacher knows he’s logged in because too often smart phones don’t register attendance.

For every knock that’s answered, the canvassers hear a multitude of stories. Sometimes, the family they’re looking for has moved away. That was the case when they knocked on Michelle Walk’s door, one of a handful of addresses in the Smith Homes on their list. But it was still a fruitful visit. Walk had recently moved there with her two school-age children who are currently attending a charter school. She told Nathan and Enriquez that she’s planning to switch them to the neighborhood district school for the next school year.

That pleased Nathan, who promised to send Walk’s information to the enrollment department and gave her information about summer school. She also urged her to join the school PTA.

“Well, we’re about to be best friends,” said Nathan. “We definitely need your voice.”

Earlier in the day, the duo caught Tanesha Spencer as she was packing up her car for a family trip to the beach. While many of the addresses on their list were for students who were missing school, the trip to Spencer’s house was for a different reason: She has a child entering kindergarten this year.

Targeting parents like Spencer is important given kindergarten enrollment was down across Michigan — and the nation — this school year. The drop in the kindergarten rolls was one of the biggest drivers of nationwide K-12 enrollment an analysis by Chalkbeat and The Associated Press found.

“We lost about 1,000 students that would have normally been enrolled that didn’t enroll this last year in DPSCD,” said Vitti, the superintendent. “So the kindergarten boot camp will focus on rising kindergarteners and kindergarteners who should have been in kindergarten. That will be a focal point to try to have more of those students attend summer school.”

Spencer said that when she saw the district vehicle and van stop in front of her house, she thought they were there to hand out free books for her kids. She still appreciated the kindergarten enrollment information.

“It’s very helpful with ya’ll coming to the door. Definitely.”

This article was originally posted on What will it take to recover from the pandemic? In the Detroit district, home visits are a key part of the strategy