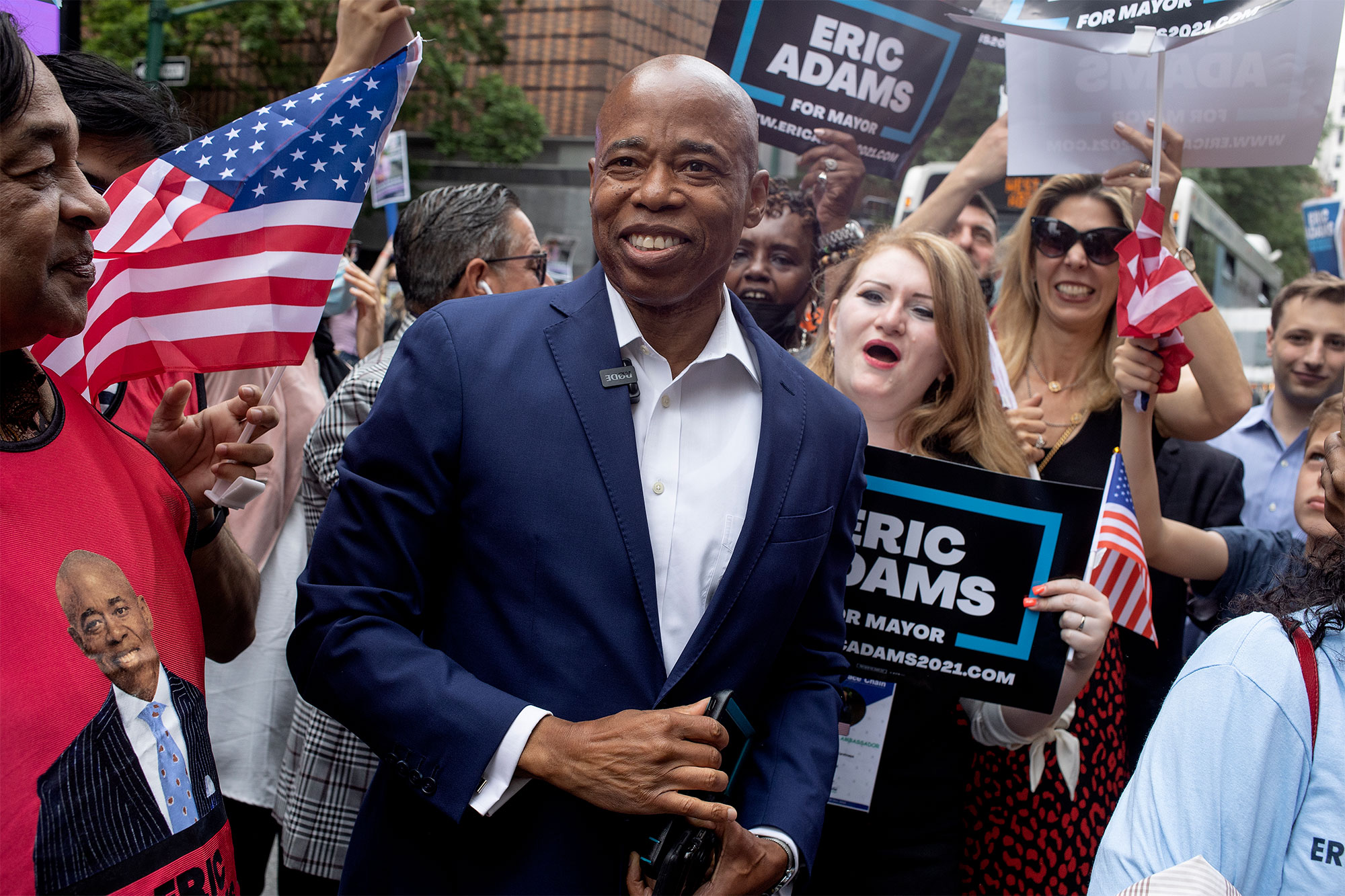 When he decided to run for state Senate in 2005, then-NYPD Captain Eric Adams confronted something new: For the first time in his life, he would have to reveal personal details on financial disclosure forms available to the public.

In at least one regard, records show, he failed to do what was required.

At the time he co-owned a co-op apartment in Prospect Heights, Brooklyn, with Sylvia Cowan — who today describes the two of them as “good friends.” Because his co-owner was not a relative, Adams was required to disclose his financial interest in the property under guidelines of the state legislative ethics commission.

As a leading mayoral candidate, Adams has declared questions about where he lives and owns property to be settled. But a broken paper trail and unexplained entanglements raise questions about his holdings and his transparency about them as the June 22 primary approaches.

These questions involve his ties with Cowan, who is not only an owner of the Prospect Heights apartment but, as of 2018, owns another co-op unit in a Fort Lee, N.J. tower. She lives one floor down from the unit his campaign told THE CITY Adams purchased for $288,000 cash in 2016 in partnership with his girlfriend, Tracey Collins.

Adams contends he gave away his shares in the Brooklyn apartment to Cowan shortly after he started in the state Senate in 2007. But a review by THE CITY found signs that he may have retained his co-ownership while serving as Brooklyn borough president, a post to which he was first elected in 2013.

The failure to declare the Brooklyn co-op is just one instance in which Adams hasn’t provided required statements about his holdings, THE CITY’s review found.

On city disclosures, he showed up to $50,000 a year in income from rent, Politico reported. But to the IRS he has in recent years claimed zero taxable rental income, asserting it was offset by repair costs to the property. He admittedly provided no documentation to the IRS, year by year, as required.

When the city Department of Buildings investigated a complaint of an illegal apartment in the Bedford-Stuyvesant townhouse in 2017, inspectors twice left notices informing the owner to contact the department when they found no one home. Adams never responded and the case was deemed “administratively closed,” according to the DOB.

Adams was first elected to public office in 2006 after retiring with a pension from the NYPD. By then, he owned the Prospect Heights co-op and a four-family building in Bedford-Stuyvesant he’d purchased in 2003 at a federal housing auction for $250,000 with a $316,000 mortgage.

That’s the property he reported as his current address when Politico raised questions about whether he lived in a New Jersey condo he also owns. He invited reporters to tour the Brooklyn apartment last week.

On Tuesday, Adams’ campaign said he only moved into the Lafayette Avenue address in 2017, although earlier statements suggested he’d lived there for nearly a decade.

Before 2017, the campaign now says, Adams rented out the apartments in the Bedford-Stuyvesant property and lived at two other Brooklyn addresses — including the Prospect Heights co-op he co-owned with Cowan.

City property records show that Adams and Cowan purchased the co-op at 425 Prospect Place in 1992 and paid off the mortgage by 1999.

He still owned the co-op when he ran for office, but didn’t mention it on the financial disclosure forms he filed with the Senate. As recently as February 2018, Adams referred to this Prospect Heights co-op as his “residential address” in one of his Eric Adams 2021 campaign filings with the state Board of Elections.

Asked by THE CITY about the co-op, Adams said, via his campaign, that he gave away his shares to Cowan in 2007.

There is, however, no official record of this alleged transfer of ownership filed anywhere. To back up his claim, Adams’ campaign provided THE CITY with a photocopy of a one-page letter he says he wrote to Cowan in which he writes that he’s agreed to “assign my shares” of the co-op to her as of March 1, 2007.

The letter, dated Feb. 9, 2007, is not notarized and contains his signature, but not hers. In the note, Adams writes that he is “assigning” the shares to Cowan “without asking for any payment for my portion of the shares.”

Cowan did not respond to THE CITY’s call seeking comment. Instead, Adams’ campaign released a quote from Cowan stating, “I have fully owned 425 Prospect Place, Apartment 1K since 2007, when Eric signed his half over to me. Eric and I remain good friends.”

A covenant on the building’s mortgage at the time required the bank to approve all transfers of ownership. Yet according to a statement Cowan provided via Adams’ campaign, she said she only told the board “recently” about the transfer of shares that he says occurred in 2007.

“I just recently updated the co-op board at the building about the apartment’s ownership status,” Cowan stated. Adams’ campaign did not respond to THE CITY’s request to provide documentation showing that Cowan notified the board.

In the course of his mayoral campaign, Adams has spoken about the co-op apartment — which he now claims to have given away for free — as a springboard for financial success.

“Actually, the foundation of who I am today, believe it or not, is because of a co-op,” he told Habitat, a magazine for co-op shareholders. “I was able to save enough money. I was able to really invest. It helped me so much.”

The campaign says that statement is consistent with his account of giving away his shares in the co-op to Cowan: “By owning an apartment he was investing and saving money. He then shared that with Ms. Cowan.”

Adams did not disclose his ownership in the co-op in his Senate financial disclosure forms for 2007, 2008 and 2009, but did refer to the address under a section where state lawmakers must disclose income from outside jobs: “REAL ESTATE CONSULTANT – 425 Prospect Place, BK NY.”

His mayoral campaign asserts that the listing was simply the address associated with real estate work Adams did on the side.

A little over two miles away from Prospect Heights, Adams was raking in rent from the Lafayette Avenue property he’d owned since 2003. On financial disclosure forms filed as a state senator and then as Borough President, he estimated the annual rent roll ranged from $5,000 to $50,000.

During 2017, 2018 and 2019, Adams filed his tax forms with the IRS claiming that he’d netted zero taxable rental income because the costs of repairs to the property exceeded the value of the rent.

There is no record of any permits for any type of work at that address during that time. The only work filed with the Department of Buildings took place in 2003 when he first moved in for a $3,000 contract to replace gas meters.

Asked about this, the Adams’ campaign responded, “There are repairs that do not require permits or filings — including costly ones.”

All of this would have been cleared up by a document the IRS requires taxpayers to file called Schedule E, which spells out all rental income and expenses, whether or not permits are involved.

But Adams did not file the required Schedule Es from at least 2017 through 2019. He said he no longer has copies of his IRS forms for 2015 and 2016, and can’t remember whether he filed a Schedule E in those years either.

Evan Thies, an Adams campaign spokesperson, told Politico that Adams had already amended his filings for 2017 through 2019, but didn’t provide copies when asked.

In his Senate filings from 2008, Adams listed the Lafayette Avenue building as a three-family. He has since declared it as a four-family building.

In May 2017 someone called 311 to report an “illegal apartment” and “construction without a permit” at the Lafayette Avenue address.  A couple months later, Department of Buildings inspectors showed up twice but got no response after knocking and ringing the bells for all four apartments.

A spokesperson for the DOB said after each visit, the inspectors left a notice at the front entrance to the building “notifying the building owners and occupants of an attempted inspection at the building, and requesting that they contact the department to schedule a new inspection date.”

Adams did not respond to either of the two notices, according to the DOB spokesperson, who added that the notices “are a request for the property owners and building occupants, not a legally binding department order.”

In the end, the complaint was closed administratively because there was no response, the spokesperson said.