Please ensure Javascript is enabled for purposes of website accessibility Freezing temperatures are dangerous for homeless people. Shelters are urging Texans to come in off the streets. - Mid Year Media Review
Skip to content 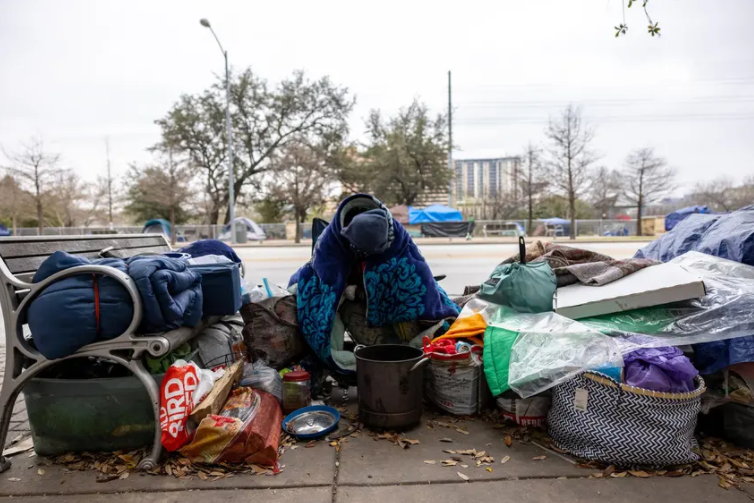 As Texas endured a second day of freezing temperatures, hundreds of people who live in the streets sought live-saving refuge in emergency shelters.

In Texas’ largest cities, homeless shelters and warming stations are experiencing high demand, although advocates say there’s still enough capacity to ensure no one will be turned away.

“We are very concerned about those people that won’t come in,” pastor Wayne Walker, CEO of the Dallas-based organization Our Calling, told the Tribune. “Street outreach teams have been driving, finding people in the woods, and police are still bringing people.”

According to Walker, a sheltering space at the Kay Bailey Hutchison Convention Center in Dallas received 650 people Monday night. In Houston, the emergency shelter at the George R. Brown Convention Center has received almost 800 people on Tuesday. In Austin, city officials recorded around 500 people across different emergency shelters, including the Palmer Event Center.

In Fort Worth, the two largest homeless shelters were without power for extended periods, leading to icy temperatures inside, according to Tara Perez, manager of the Directions Home program. The city has since opened up its convention center as a warming center.

Cities have also opened centers and warming stations in churches, gyms and community centers. These locations are receiving not only people that live on the street, but also neighbors that don’t have heating or electricity.

In San Antonio, where temperatures could reach 27 degrees on Tuesday night, several emergency shelters have opened, and the city is using the Henry B. Gonzalez Convention Center as a warming center. Advocates are working to locate people in need and ensure that no one is endangered by the freezing cold.

Outreach teams are trying to be careful while driving on icy roads, looking for people experiencing homelessness.

“The street outreach teams have been going to all the places that they are familiar with, where people typically stay,” said Billy Mahone III, director of Community Engagement with the South Alamo Regional Alliance for the Homeless. “We’ve had some reports of people that initially refused, but now they are coming with us.”

Leaders of homeless organizations are asking Texans to be proactive and look out in their neighborhoods for anyone that might be in risk. “Our street outreach teams can help some, but we are getting hundreds of calls,” Walker said. “The best option right now is to call the police, because this is a life-threatening situation.”

Since the pandemic began, homeless organizations have had to balance providing space to shelter with the necessity of social distancing. Regular shelters had to reduce capacity and many cities have rented hotel rooms to supply additional needs.

“The center has a good amount of space to fit people. The cots are generally spaced out as much as they can be and of course they’ve asked everyone to mask up. In general people have adhered to those guidelines,” said Sean Quitzau, who is working at the George R. Brown Convention Center and is an outreach team lead at SEARCH, a Houston-based organization.

Homeless organization leaders said that no one will be denied space in these emergency shelters and they are also working to provide blankets, food and water. Most organizations interviewed by the Tribune said financial donations were more effective than gifts of clothes or blankets, because the money allows them to buy items in bulk and according to the specific needs they identify.

“The cost of this event financially for nonprofits is extreme,” Walker said. “I would encourage everyone to support their local homeless nonprofits and make a donation. Our resources are very limited and the needs are big.”

Advocates are also worried that icy streets might make it more difficult to transport people experiencing homelessness, as well as staff and supplies. In San Antonio’s downtown area, organizations like Corazon Ministries and the First Baptist Church are seeking nearby volunteers to supplement their ranks while staff are unable to travel safely.

“Because of the ongoing pandemic, we are going to hit a record need for assistance,” said Becky Wach, executive director of the Salvation Army North Texas. “Financial assistance for rent, utilities and medication will still be available. And when it’s safe to travel, our food distribution centers will be available for drive thru service again.”

Over at the George R. Brown Convention Center, Sean Quitzau is keeping busy, helping people settle in for the night and then sharing resources on how they can access housing, get their Social Security or book health care appointments.

“We are meeting people where they are,” Quitzau said. “There’s a lot of people experiencing homelessness in one place. We can often open the door to them and allow them to walk through it to get what they need.”

This article was originally published on Freezing temperatures are dangerous for homeless people. Shelters are urging Texans to come in off the streets.