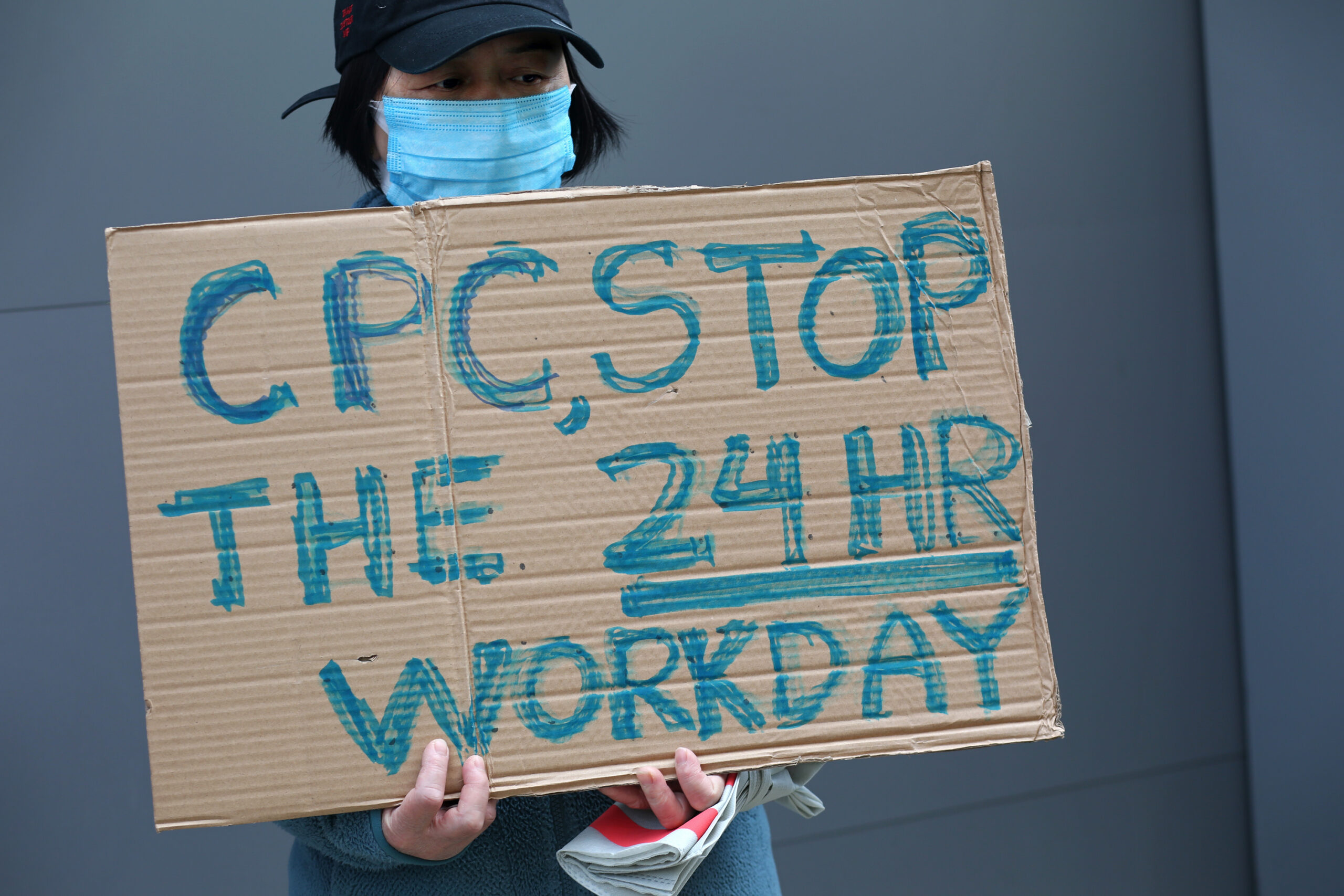 The workers crusading against the Chinese-American Planning Council (CPC) accuse the group of harming Asian workers even as its leaders speak out against recent violent attacks on Asian New Yorkers.

The workers are also taking on their own union, political powerhouse SEIU 1199 — with support from a candidate, Chris Marte, running against 1199’s pick in the race, Gigi Li. A third candidate, Jenny Low, is CPC’s former chair.

The workers are demanding CPC, 1199 and Gov. Andrew Cuomo stop paying home care workers for just 13 hours’ work even when they’ve logged as many as 24 hours at a client’s home. They also want an apology — and back wages.

At a rally last Wednesday, more than a dozen home attendants currently or formerly working for the organization sounded the alarm — literally. In sync, they activated personal safety alarms that Chinese-American Planning Council has been distributing as a safeguard against attacks.

Laiyee Chan, 66, who said she’s worked as an aide for 20 years, told THE CITY that home care aides are suffering through marathon shifts for little pay.

“So if you walk on the street and someone attacks you, yeah, that’s painful,” Chan said in Cantonese through an interpreter. “But you know we’ve been doing the home care work for a long time.… Our fingers, arms, legs are damaged.”

Joining them at the rally, which was organized by the Chinese Staff and Workers Association and Ain’t I A Woman?!: Christopher Marte, who’s running for the City Council seat currently held by term-limited Councilmember Margaret Chin (D-Manhattan).

Marte — a political organizer whose mother worked as a home care attendant — gave a speech advocating for pay for all hours worked.

The crowd cheered Marte, who has also been a presence in related protests against their union, 1199 SEIU, and has signed a pledge backing their demands.

“In 2019 and 2020 we stood outside of their union demanding for better protection for them to be highlighted as heroes and individuals and what did we hear? Silence,” said Marte.

Wayne Ho, CPC’s president and chief executive officer, told THE CITY that the workers’ claims of wage theft and abusive work conditions are “categorically false” and said the organization supports immediately eliminating the 24-hour workday, a rule that is set by the state.

The protestors are urging elected officials to withdraw endorsements from Low, who formerly chaired CPC’s board of directors.

“A candidate who would allow an inhumane level of exploitation to exist in an agency she oversaw cannot represent the working people of District 1,” the protesters’ statement reads. The district includes the Financial District, SoHo, Battery Park City and Tribeca as well as Chinatown.

Low could not be reached for comment, but said in a statement that she joined CPC in pushing the state for the end of the 24-hour rule.

At the rally, chants of “CPC apologize” mingled with “Say no to Jenny Low.”

The pay battle stems from state rules that limit Medicaid payments to home health care providers to 13 hours pay for every 24 worked — action Gov. Andrew Cuomo took after courts ruled in 2017 that workers should be paid for every hour on the job site.

When it took emergency action to reinstate the rule limiting pay to 13 hours, the state Department of Labor declared necessity “to preserve the status quo, prevent the collapse of the home care industry.” The state rule sets aside eight hours for sleeping and three hours for meals. Workers are supposed to get at least five hours of uninterrupted sleep.

Lawsuits starting in 2015 took aim at Chinese-American Planning Council over hours and pay for about 5,000 workers dating back to 2008. Those cases have become part of an arbitration involving 40 home health care agencies.

Bills are pending in the state legislature that would limit workers to fully paid 12-hour shifts and mandate that overtime be voluntary but have not seen action. Protestors are betting demonstrations like the ones targeting Chinese-American Planning Council and SEIU 1199 could help turn up the heat on Albany.

Sarah Ahn, an organizer with the Ain’t I A Woman?! campaign, emphasized that the protest was spurred by anger that CPC was requesting funds from the city and state to combat anti-Asian hate without “lifting a finger” to pay back wages. The state budget passed in April ultimately bookmarked $13 million in emergency funding for Asian American community based organizations.

Ahn referenced the history of the fight against what she called a “a state-sponsored sweatshop system.”

She added: “This has been going on for a long time. Hundreds of homecare workers have actually already spoken out. It’s been six years.”

Nearly 300,000 people do home care work in New York City, according to the latest available state data, many making at or near the minimum wage of $15 an hour.

Activists said they are not satisfied with home care agencies shifting the blame onto the state, maintaining that CPC could move away from the 24-hour work day if it chose to. At the end of their rally last week, they promised they’d be back.

“Look at how many years of violence they had to endure,” said Yolanda Zhang, an organizer with the Chinese Staff and Workers Association. “CPC’s racism and sexism is against its own community.”