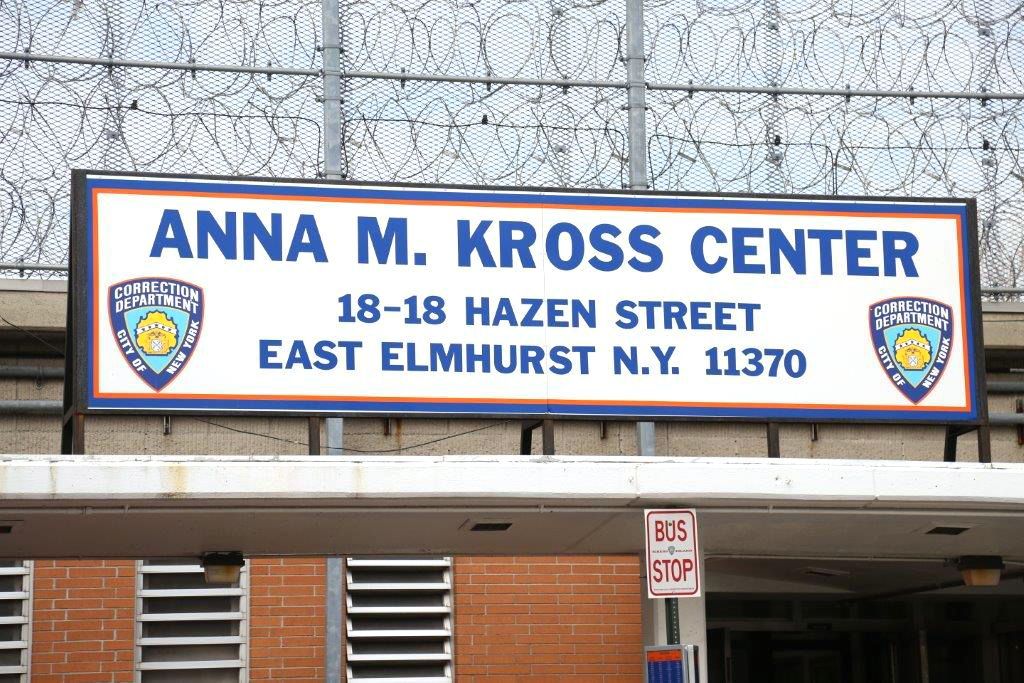 For the first time in years, city jail officials put a Rikers Island facility housing seriously mental ill detainees on lockdown because there were not enough available officers on Sunday, THE CITY has learned.

Some 1,200 correction officers called out sick that day and another 700 or so were on medically restricted duty for various health reasons, Correction Department records show. That forced some officers to work triple or quadruple shifts.

By contrast, an average of 500 officers were out sick with around 300 on limited duty on any given day in 2019.

The union representing frontline jail officers fears more lockdowns due to staff shortages are on the horizon.

“We are holding our breath for Mother’s Day this Sunday,” said Michael Skelly, a spokesperson for the Correction Officers’ Benevolent Association.

The 1,901 detainees in the Rikers lockup, including many with mental health issues, were required to stay in their cells, without recreation time.

The Kross Center is where the department keeps most of its mental observation units as well as the Clinical Alternative to Punitive to Segregation unit. That’s the area where people with mental illness are placed instead of solitary confinement when jail officers say they act out.

“There are always issues with how the jails operate,” said Kayla Simpson, staff attorney with the Prisoners’ Rights Project at Legal Aid. “But we are hearing a particular level of desperation from people in custody right now.”

Clients behind bars say that there are sometimes not enough officers to escort them to medical clinics for appointments or to court video conferences, Simpson said. Food and medication deliveries are late or totally missed and mail takes days to be distributed, she added.

“People are reliant on department staff for every basic need that they have,” she added. “And so when there are staffing problems those disruptions are very serious.”

Peter Thorne, the Correction Department’s top spokesperson, said the Kross Center was not placed on a “facility-wide” lockdown. But he declined to detail which areas in the facility were closed off.

“We’re grateful for the dedication and commitment of our staff each and every day, and the safety of all of those in our facilities remains our first priority,” he said.

One former top jail official could not remember the last time the department locked down a facility due to lack of staff — save for weather-related crises.

“It certainly hasn’t happened in my memory,” said Mark Cranston, former acting Correction Department commissioner at the start of the de Blasio administration.

The department has locked down jails 11 other times over the past year because of snow or other bad weather. Many officers are single parents and must stay home when school is canceled or have a hard time getting to Rikers when public transportation is suspended.

Jail supervisors and union officials say a big reason the number of officers out sick is currently so high is because of low morale 14 months into the pandemic.

City correction officers have so-called “unlimited sick,” meaning they can take as much paid time off as medically necessary.

But some officers who might normally come to work even if feeling a little under the weather are now just staying home, said Joe Russo, president of the Assistant Deputy Wardens / Deputy Wardens Association.

“People don’t want to come to work,” he said. “Management preys on staff. The safest thing to do is not get involved or not come to work.”

Steve Martin, a federal monitor overseeing the department, has frequently criticized the department’s disciplinary system. His reports have noted that it often takes months for investigations into allegations of abuse — and some cases are never completed before an 18 month statute of limitations.

But jail unions say the changes have put too much pressure on officers who sometimes have to make split second decisions.

“Staff does not feel supported by the management and management has no ability to motivate staff to come to work,” Cranston said.

The Correction Department has approximately 8,100 officers who are used to staff three shifts daily at city jails.

COBA has repeatedly complained that some officers have been forced to work triple and quadruple shifts because there are no officers to replace them.

On Sunday, 40 officers worked triple shifts — putting them on duty for close to 24-hours straight, according to the union. Another nine stayed at their posts for part of a quadruple shift, the union said.

“They are driven to the point of exhaustion,” Skelly said. “We have officers telling us they are sleeping in their cars on Rikers with pillows and sheets because they are too tired to drive home.”

The union is lobbying state lawmakers to pass a measure banning triple shifts, he added.

In April 2020, de Blasio told reporters that it was “a horrible mistake” to make officers work triple shifts and promised to end the practice.

The city vowed last month to hire an additional 400 officers, although no date is scheduled for the new class of recruits to begin.

Inmate advocates contend that there’s no need for new officers. They point out the inmate population is at approximately 5,619 — less than half the number of from when de Blasio took office in 2014.

“This agency already enjoys an incredibly high ratio of staff to people in custody as compared to other jurisdictions,” Simpson said. “This is fundamentally about persistent management of staff and how they are assigned.”

“Our experience has shown that more officers will only mean more abuse,” said Kandra Clark, vice president of policy and strategy at Exodus Transitional Community.

Cranston blamed top leadership for what he called a staffing “crisis.”

“When Mayor de Blasio came in he couldn’t point to the previous administration fast enough and how he was left a bad system,” he said. “And in his eight years, he has made the system fundamentally inoperable.”