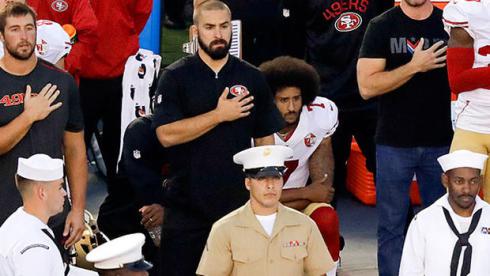 A recent movement to combat existing racial injustice in professional sports is kneeling for the National Anthem.

Before sitting and kneeling for the anthem, Colin Kaepernick was the franchise quarterback for the San Fransisco 49ers and even led them to the Superbowl in the 2012-2013 season. As a dual-threat quarterback, Kaepernick could make plays with his arms and with his legs.

In the playoffs leading up to their Superbowl loss, “Kaepernick rushed for an NFL-record 181 yards and two touchdowns on just 16 attempts…No quarterback has ever rushed for more yards in any NFL game…Kaepernick did it in his first playoff appearance,” according to Gregg Rosenthal of NFL.com.

When Colin Kapernick sat for the pledge onAugust 26, 2016, it brought a lot of attention towards racial injustice.

“I am not going to stand up to show pride in a flag for a country that oppresses black people and people of color,” “Kaepernick tells NFL Media” after the game.” “To me, this is bigger than football and it would be selfish on my part to look the other way. There are bodies in the street and people getting paid leave and getting away with murder.”

As time progressed, Kaepernick changed his method from sitting to kneeling for the anthem. It brought much positive attention, but also negative attention to him at the same time.

On the flipside, Kaepernick received many animosities, especially from the United States president, Donald Trump.

As time progressed with the movement of kneeling for the anthem, BBC News also reported how “Wouldn’t you love to see one of these NFL owners, when somebody disrespects our flag, to say, ‘Get that son of a bitch off the field right now, out, he’s fired. He’s fired,” said Trump.

The President’s comments would add more fuel to the fire of negativity. Thus, creating more of a conflict on the issue of racial injustice.

Now a free agent, Kaepernick has even teamed up with Nike to fight against racial injustice, as stated in a separate BBC News report.

Fast forward to the year 2020; there is a pandemic killing people every day and a rise of racial injustice in the form of police brutality. Ever since the inhumane killing and death of George Floyd by Derek Chauvin, there have been more and more instances of police brutality circulating nationwide. Innocent African Americans, including Breonna Taylor, Jacob Blake, and Daniel Prude.

Players all over the NBA have noticed all of the violence used by police on innocent African Americans. One of whom is arguably one of the greatest players of all time, Los Angeles Lakers forward, LeBron James. James has consistently played at a high level ever since his first year in the league in 2003. James is a “16-time all-star, three-time NBA champion, three-time finals MVP, and a four-time league MVP,” according to Basketball-Reference.

James is now leading the fight against racial injustice in the NBA. This season “On Thursday (July 30), LeBron James and several other players took a knee during the singing of the National Anthem…James and several others rocked Black Lives Matter shirts before the game started,” as reported by Revolt TV.

Even with no fans in the audience due to the pandemic, James wants to see more and more people join the fight against racism existing in the country today.

“The game of basketball has always been bigger than just a ball and a rim and 10 guys on the floor, four referees,” he explained. “We used this platform to spread a lot of positive, a lot of love throughout the course of the whole world,” James added.

As the NBA season is coming to a close, the Los Angeles Lakers are making a deep run into the playoffs. While James continues to be a pioneer for fighting racial injustice, he will try to get his fourth championship.

In recent news, Detroit Lions quarterback Matthew Stafford kneeled for the National Anthem in a regular-season game against the Chicago Bears.

Leading up to this event, Stafford is an “11 year Veteran for the Detroit Lions,” as depicted by Pro-Football-Reference. He has been a consistent starter at the quarterback position for the team. In his first eleven seasons, Stafford has been able to get the Lions into the playoffs a couple of times, in which they have struggled to perform. Stafford has been praised for his arm power compared to other quarterbacks in the league, especially when he throws a deep ball.

Compared to responses by Colin Kapernick and LeBron James, Stafford gives a positive outlook on how people should embrace one another regardless of their race. He wants to see people “learning and understanding” about the racial injustices that, unfortunately, still exist in today’s society.

With sports leaders like Colin Kaepernick, LeBron James, and Matthew Stafford leading the charge against racism, it can encourage others to join the fight. Through peaceful forms of protest, these players have established themselves in the cause to end discrimination. With more and more athletes joining the battle, there are hopes for true change in the future.