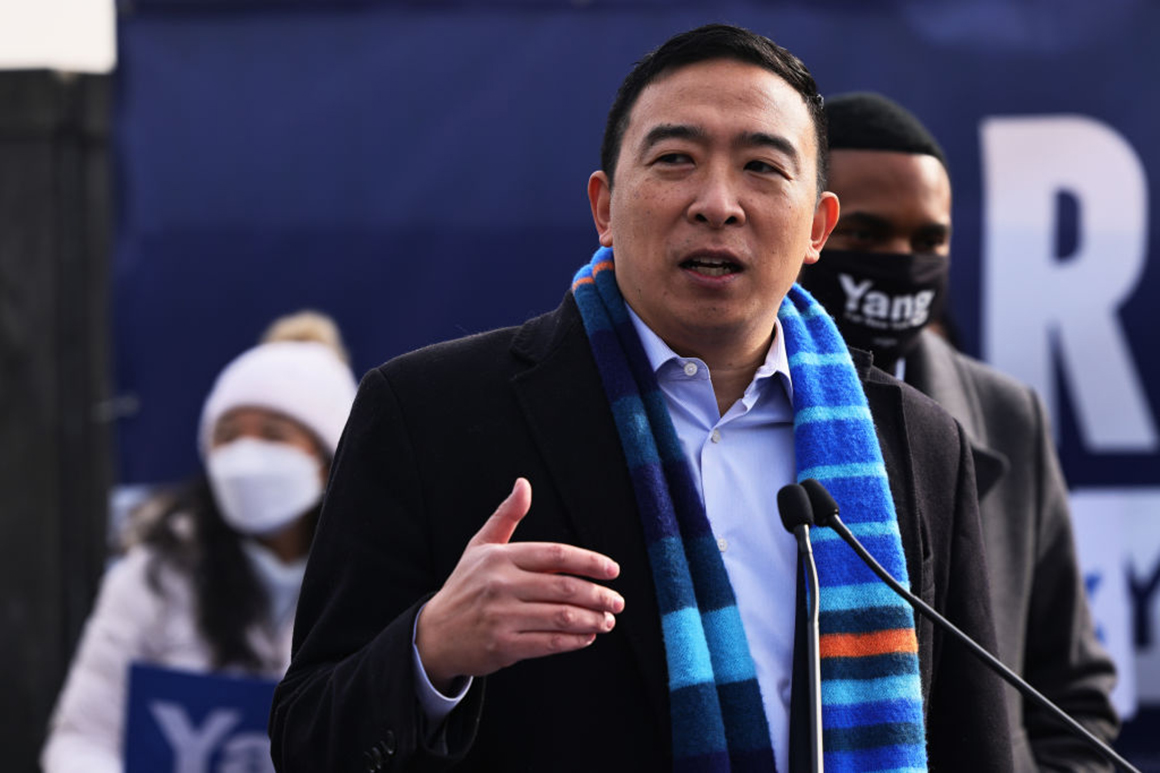 Mayoral candidate Andrew Yang jumped in to help a photographer on the Staten Island Ferry Friday, after a man wielding a metal pole knocked the photojournalist down.

The incident unfolded around 11:10 a.m. after Yang and his staff talked with journalists during a campaign jaunt to Staten Island. The photographer, Spencer Platt, was on the ferry’s upper deck when a tall, disheveled man approached with a long pole in hand.

“It probably all went down in like 15 seconds. I was on the phone talking to a friend when everyone else went in and I turned around and there’s a guy an inch away from my face,” Platt, who was shooting for Getty Images, told THE CITY. “I said something like, ‘What’s up?’”

“Stuff happens, but rarely does it lead to someone shoving you to the ground and holding a metal bar over your head.”

Yang quickly ran outside and got in between Platt and the attacker. The man walked towards Yang angrily at first, but backed off after the mayoral candidate started calmly talking to him.

“I didn’t have much time to think. I saw the photographer get shoved and it seemed like it might get worse. So I did what I think a lot of people would do, which is like: ‘I have to prevent this person from getting hurt,’” said Yang, 46. “So I got up as quickly as I could and tried to intervene before the man could swing.”

The man appeared to recognize Yang and became less aggressive as they chatted — and said towards the end of their exchange that he’s supportive of his candidacy.

“I’m really grateful that he became less aggressive upon seeing me. I had no certainty that he would know who I was, I just thought of myself as a bystander trying to defuse the situation,” Yang said.

Cops on the Scene

Two NYPD officers aboard the ferry went up to the upper deck after the photographer informed them of the incident. The cops grabbed the man, who appeared to be in his 30s or 40s, and had been spotted talking to himself before the fracas.

Yang told THE CITY that while he thinks it made sense for officers on the ferry to respond, he said he doesn’t believe police officers can provide proper support to people with mental health issues.

“Because we’re on the ferry, they’re literally NYPD that are on the ferry beat and so it would be very sensible that they’d be the first one there and on the scene,” Yang said. “But the question is who’s actually going to provide the support and  services that a lot of people need and in that light the police are not equipped to provide a lot of what would actually put people in better situations.”

He also reiterated a commitment to fund mental health services.

“We need to drastically improve our investment in mental health resources for people who are struggling in every part of the city,” said Yang. “Whether it’s children going back to school, many of whom may be facing learning loss, emotional struggles or even trauma to people who are struggling with street homelessness and may have mental health issues. We haven’t been doing enough and we need to do more.

“So I think about it all the time,” he said. “I think a lot of us think about it because when you’re walking around in New York City and you see people who are struggling. We need to get those people the mental health they need.”

Platt, who ran outside after Yang distracted the man, told THE CITY that he’s thankful the candidate leapt into the fray.

“I’m not trying to plug the Yang campaign, but he did run up and confront the guy and led the charge. And when the guy turned around, I just bolted,” said Platt.

Yang is running in an extremely crowded Democratic primary race, but a recent poll showed him leading the pack. He’s apparently benefited from name recognition built up from his presidential campaign last year.

Police officials did not immediately comment on the incident.