Please ensure Javascript is enabled for purposes of website accessibility Nearly a year into the pandemic, grocery workers in Texas are more fatigued than ever as they await vaccine access - Mid Year Media Review
Skip to content 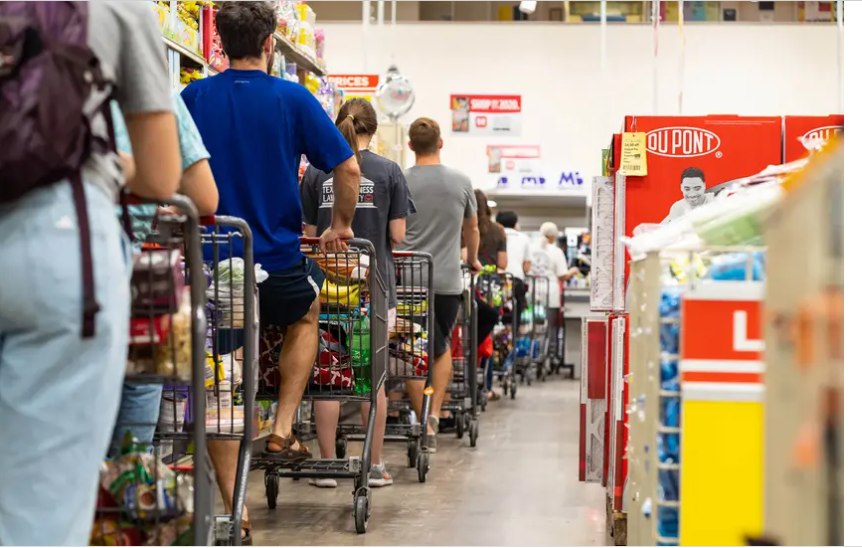 In the middle of a recent shift at Kroger in Cedar Hill, Jackie Ryan was assisting customers with self-checkout when an elderly woman asked for help finding canned pumpkin. While Ryan pointed her in the right direction, the woman mentioned that she had been feeling sick. After Ryan helped her and her son pay for their groceries, the woman suddenly collapsed.

Ryan quickly dialed 911, and a team of EMTs arrived to take the woman to the hospital. While overhearing the first responders question the woman, Ryan discovered that she had been sick for over two months and received a COVID-19 test earlier that same day.

Ryan didn’t know the results of the test, but concerned about potential exposure to the virus, she asked her manager if she needed to quarantine or take time off work.

“If you don’t get any symptoms, then it’s fine,” the manager replied.

April Martin, the corporate affairs manager for the Kroger Dallas Division, said that Kroger has complied with all health and safety regulations when identifying positive cases among store employees.

Nearly a year into the pandemic, Ryan’s experience that day reflects the challenges that grocery store workers across Texas are facing in their stores every day. For months, workers have risked their health to keep shorthanded grocery stores open, all while dealing with increased hours and customers refusing to wear masks.

The Centers for Disease Control and Prevention’s Advisory Committee on Immunization Practices urged states to include front-line essential workers in Phase 1B of vaccine allocation. But Texas decided not to include any essential employees like grocery store workers in the state’s current vaccine priority groups. Without any guarantee of vaccine prioritization, grocery workers now find themselves overwhelmed and continually exposed to the virus with no end in sight.

Martin said the grocery store company, like several American businesses that had to swiftly alter how they operate in a pandemic, has spent more than $1 billion to provide safeguards against the virus and give employees bonuses, paid leave and wage premiums, among other things.

“Our dedicated associates have gone above and beyond to serve our customers and communities during one of the most challenging times in our nation’s history, and we’re committed to providing the resources and support to keep them and their families safe as they continue their remarkable effort,” she said.

Back in April, when people made a rush for essential supplies like toilet paper and soap, Gov. Greg Abbott tweeted a message of support for grocery store workers, saying that “everyone across our state appreciates your hard work to help Texans respond to the #coronavirus.” Since then, workers say they have felt forgotten and abandoned by the state government.

In December, the Texas Expert Vaccine Allocation Panel, in charge of designating each population currently eligible to receive vaccinations, decided against including front-line essential workers in Phase 1B. The Department of State Health Services said that the panel wanted to reserve vaccine doses for those at the highest risk of death, which includes people over 65 and anyone over 16 with a chronic medical condition that puts them at higher risk.

At least 8 million Texans currently qualify for Phase 1A or 1B of vaccine allocation, but the state has received fewer than 4 million doses thus far. The panel is currently considering potential priority groups for Phase 1C of vaccine rollout, and its decision will depend on epidemiological data about virus transmission, according to DSHS Director of Media Relations Chris Van Deusen.

However, at least 11 states and the District of Columbia followed CDC recommendations by deciding to put front-line essential workers, including grocery store employees, in the their latest rounds of vaccine allocation, according to The Washington Post. New York allowed grocery workers to start getting the vaccine last month. Arkansas has also started vaccinating teachers and educators in the first round of essential workers to receive doses, and the state plans to expand distribution to other essential workers later this month.

“You feel like you don’t matter when your own state goes against every recommendation that there is out there,” said Dawn Hand, who works at a Kroger in Houston. “Why don’t we matter? What’s your answer to that?”

While 17.7% of the total Texas population is uninsured, 24% of grocery workers in 11 Texas cities have no health insurance, according to an Associated Press analysis of census data. The pandemic has disproportionately impacted people of color in Texas, and COVID-19 is deadlier for Black and brown people in the state. Black and Hispanic Texans have also faced more obstacles than white people in accessing the vaccine. Hispanic Texans make up 46% of grocery store workers in the 11 analyzed Texas cities and just over 39% of the state population. Black Texans make up more than 17% of grocery store employees in those cities, compared to just under 12% of the state population.

The AP compiled information from the U.S. Census Bureau on cities with the largest populations of front-line workers to estimate the proportion of such employees in different demographic groups in 100 cities across the country. The Tribune analyzed the data on the 11 Texas cities in that list: Amarillo, Arlington, Austin, Corpus Christi, Dallas, El Paso, Fort Worth, Houston, Irving, Lubbock and San Antonio.

In early January, state Rep. Vikki Goodwin, D-Austin, spearheaded a letter from 10 state representatives to Abbott and Dr. John Hellerstedt, the DSHS commissioner, asking for essential workers like teachers and grocery store employees to be given vaccine priority. Goodwin argued that such workers should receive the vaccine as soon as possible because they are risking their lives every day to keep Texans healthy and safe.

Goodwin told The Texas Tribune that she wants grocery workers prioritized in the next phase of distribution, although she understands that the panel’s decisions remain extremely difficult.

In a rare move, Lt. Gov. Dan Patrick also sent a letter to Imelda Garcia, chair of the EVAP, requesting changes to the vaccine rollout plan to make distribution more efficient and effective. Patrick specifically asked for teachers to be prioritized, but he did not mention grocery store workers.

Patrick’s office did not respond to a request for comment, and Garcia declined an interview request from the Tribune.

Even well over a month after vaccines received federal approval, Texas continues to see dangerously high levels of COVID-19 cases and deaths. Just last week, three other workers at her Kroger location tested positive for the coronavirus, Hand said. According to one study from the journal Occupational and Environmental Medicine, grocery workers who interact with customers are five times more likely to contract the virus than employees in other positions.

“You gotta scramble to fill their schedule, and a lot of people — they’re tired, they don’t wanna do it,” Hand said. “It sucks. It really sucks. What do you do? We just have to get up every morning and push on, and that’s all we can do to ensure that the community that we care about gets fed.”

To make matters worse, grocery workers also frequently find themselves in the middle of fights over mask mandates and safety protocols in their stores. Despite a requirement for all customers and employees to wear masks at Kroger, both Hand and Ryan said they see people come into the store without masks every day.

In fact, multiple members of United Food and Commercial Workers Local 1000 have been fired for excessive confrontations with customers who refused to wear a mask in their stores, union president Ricky Burris said in his January 2021 membership update.

Martin, the Kroger corporate affairs manager, said the store “provided tips for de-escalation” to help employees interact with customers frustrated about the mask mandate. Still, workers have felt powerless to say anything to those customers, according to Ryan and Hand.

Hand and Ryan said workers don’t always have enough time to properly sanitize different parts of the store, and managers have failed to communicate clearly the protocol that employees have to follow when one tests positive. Because most people remain desperate for work during a pandemic-related recession, workers often avoid reporting symptoms or following procedures because they need the money.

“A lot of employees are not gonna step forward and say ‘I need to quarantine. I need to get tested,’” Ryan said. “There’s no benefit to getting tested. You’re gonna lose hours, you’re gonna lose work time, you’re potentially not gonna get paid for choosing to take the safe route.”

“The crazy thing is I’ve never in my life called my store and said I need a mental health day, but I literally did it that last week when that lady fell out at my register,” Ryan said.

With so much tension at work and little support from the state or from their employers, many grocery workers still see the vaccine as their last hope for better months ahead. Although they recognize the need for high risk and elderly individuals to receive vaccine priority as well, they also point out that they will continue to expose their families at home until they receive protection by being vaccinated.

This article was originally published on Nearly a year into the pandemic, grocery workers in Texas are more fatigued than ever as they await vaccine access