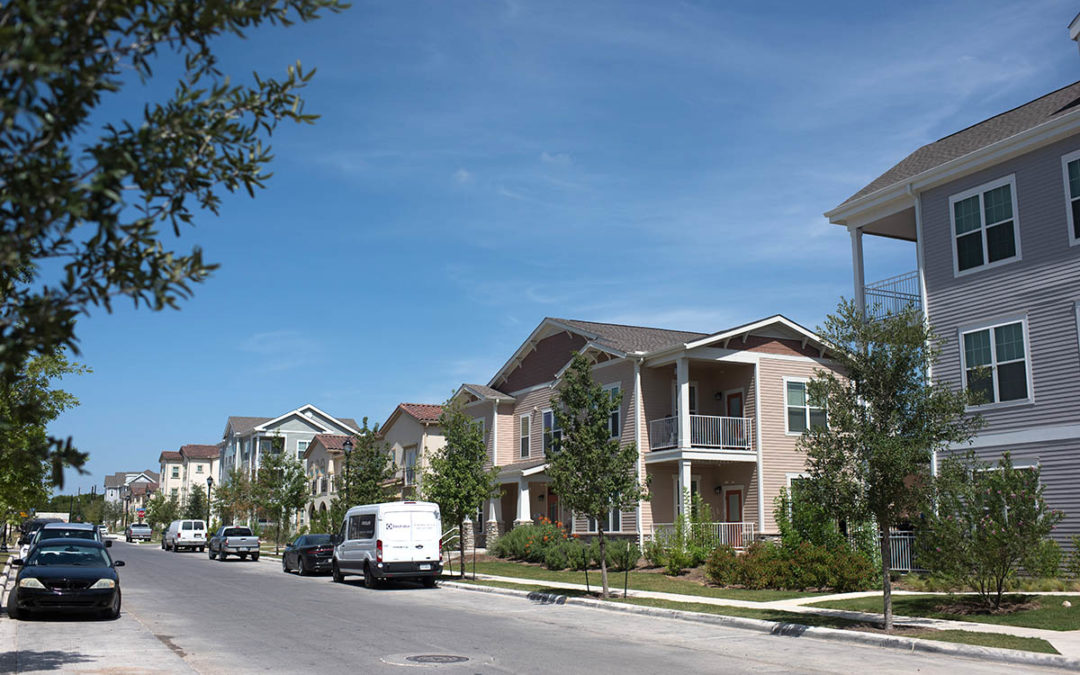 Though people started moving in last December, East Meadows, the government-built apartment complex three miles east of downtown, doesn’t feel like a community — yet — according to a comprehensive report released last week. One finding: Residents say strict apartment rules hinder neighbors from interacting with each other. The opposite was true at the old Wheatley Courts, the notorious East Side public housing projects that were leveled to make way for the mixed-income East Meadows. Former residents have told Folo Media about the violence and drug trafficking that was part of life at Wheatley Courts, but there also was community.

“It looked like a neighborhood … it looked like a real community,” said Dr. Christine Drennon, Trinity University professor of sociology and urban studies, who has studied the neighborhood since 2010. “People were outside. And one of the charming things about Wheatley Courts was the laundry lines, the clothes lines. People were outside … and they recognized each other.”

Of course, East Meadows, kickstarted by a $29.7 million Choice Neighborhood federal grant, is much safer than the old Wheatley Courts, residents say.

These are some of the conclusions Drennon’s report, commissioned by the San Antonio Housing Authority, reaches.

This is Drennon’s fourth study in as many years on East Meadows, but the first to assess what life is like at the newly-built apartments. In December, people began moving into East Meadows. The apartments are still being built — the first of three phases, 215 units, is scheduled for completion by the end of October — and new residents are moving in seemingly every week. The overall project is expected to be completed in 2019 and will comprise 414 units.

Former Wheatley Courts residents were given first dibs at East Meadows and, so far, about 22 percent of them have returned — a number that seems low, but is actually high compared to similar efforts, Drennon reports. But many East Meadows residents are new to the property.

For many residents, especially those making lower incomes, the newness of the apartments is what drew them to want to live there, the report says.

“A lot of the people in these income brackets have never had anything new,” Drennon said. “They wear used clothes. They’ve never had a new car. Their kids get used books at school. They often get used uniforms for the kids at school. And then they were offered a new apartment.”

Included in the newness are the washers and dryers that come with each unit, which East Meadows residents raved about in interviews conducted by four Trinity students for the report. Former Folo Media reporter Wally Perez heard the same thing when he interviewed residents a few months ago for our own look at life at East Meadows.

Drennon’s 128-page study touches on many aspects of the Choice Neighborhood — not just East Meadows, the initiative’s centerpiece, but also the upgrades happening throughout the neighborhood such as new lighting and sidewalks. In addition to the Choice grant, the project includes $45 million in state tax credits and $19.9 million from the city of San Antonio.

In Drennon’s report, residents of East Meadows were mostly satisfied with their new digs, but many of the grievances had to do with the rules.

One of the biggest complaints: Only being able to barbecue in the affixed pits in the communal areas. Residents aren’t allowed to have their own pits (unless they are electric grills). Rules like these prevent community from forming and help explain why life isn’t as vibrant, so far, at East Meadows as it was at Wheatley Courts, Drennon said. This is supposed to be one of the advantages of the mixed-income model like East Meadows, she said.

“Connections, right?” Drennon said. “That’s how you get things done. Everybody benefits. Not when you’re living as an individual; that can only happen in community. Community requires shared public space, by definition.”

“If you keep policing public space, that’s not going to form.”

To the rule about where residents can and cannot barbecue, charcoal or gas grills are not allowed in patio areas for safety reasons, said Michael Martinez, vice president of operations McCormack Baron Management (MBM), the company overseeing East Meadows. Electric grills, however, are allowed.

When asked what the harm would be in setting up a charcoal or gas grill just outside one’s patio, in the common area, Martinez said the rules are meant to set a standard.

“One of the things we try to do, in these mixed-income communities, is really try to tailor our house rules to be competitive with the higher rate apartments we see in the market,” Martinez said. “We want to make sure our community looks, feels, and performs as any high-end market-rate community in our neighborhood.”

But that’s not this neighborhood, Drennon concluded in her report.

“That’s what I ask, that (MBM) take a few minutes to get to know their community, and realize that this is how people get to know one another, we gather around barbecue pits and drink Bud Light, and that’s really important,” Drennon said.

SAHA officials will soon meet with MBM on how the rules may be tweaked, SAHA spokeswoman Rosario Neaves said last week.

It will also take time for community to form, Drennon said. East Meadows has been open for nine or so months. Before they were demolished a few years ago, Wheatley Courts had been around since 1941.

About 22 percent of Wheatley Courts residents have returned to East Meadows, so far. That number is actually high when compared to similar and recent SAHA projects — Hemisview (which replaced the Victoria Courts) and the Gardens at San Juan (which replaced the old San Juan Homes).

Though the return rates for Hemisview and San Juan were not available, Drennon said she thought they were between 4-6 percent.

(It’s worth noting that Hemisview and the Gardens at San Juan were Hope 6 projects and did not require a one-for-one replacement of affordable housing. Conversely, the total number of units at Wheatley Courts — 246, according to SAHA — eventually will be offered at East Meadows).

Still, a lot of folks stayed away. The main reason: They got settled. And the Section 8 voucher, which they all received when they were forced to leave Wheatley Courts, is the biggest reason.

“For a lot of people, it’s a ticket,” Drennon said. However, for some, public housing is a better option. “It’s safe, it’s dependable. Whereas some landlords are not,” she said.

Aside from the Section 8 voucher, former Wheatley Courts residents were assigned a caseworker, from a nonprofit called Urban Strategies, to assist with the transition. Some of the residents who decided not to come back to East Meadows still use the service.

It’s part of a strategy to get these low-income residents on a path to self-sustainability.

One of the main strategies: Get them job training and eventually a job. But it’s been hard for many to find work, Drennon writes.

“Multiple reasons intersect, but primarily the reasons are health-related and the quality of job available with the certifications recommended,” Drennon writes.

Some residents cannot find a job because of health reasons. Yet not working can impact one’s health negatively, and they cannot access healthcare without a job.

“It’s a vicious cycle,” Drennon writes. “We must re-conceptualize the movement toward self-sufficiency away from simply workforce development to include adequate healthcare and access to education.”

While partnering with Urban Strategies, the University of the Incarnate Word’s nursing school evaluated about 30 families in 2016 and early 2017 and found that many had ailments that had gone undiagnosed, all their lives in some cases, for financial reasons.

A big finding of Drennon’s was that a household’s stability has a more positive effect on a student’s education than an enhanced or revised curriculum. “Children who do not move perform statistically significantly better than those who do, no matter how fancy the curricular enhancement,” Drennon writes.

Drennon came to this conclusion while studying performance measures of students who attend schools that feed into Wheatley Middle School, which abuts East Meadows to the north, the past five years.

“Educational resources should be targeted toward family stability in addition to (or perhaps instead of when resources are limited) unsustainable curricular enhancements,” she wrote.

Drennon and her students also talked to people who live in homes around East Meadows.

Residents from nearby households were ambivalent about the lighting and sidewalk enhancements — they liked them, but saw them as potential signs that they would be displaced down the road.

“I think they are watching neighborhoods like Dignowity Hill and Denver Heights (closer to downtown) and knowing that the new people are moving in — people who have more money, more disposable income, who are taking these old houses and fixing them up. I think those are the ‘new people.’”

We didn’t include every topic in Drennon’s report because it’s too expansive to cover in one news article. In a podcast next week, you’ll get a chance to listen to the entire, hour-plus interview with Drennon as we dive into the so-called weeds of the Choice Neighborhood initiative.

Even that interview isn’t long enough to answer or address all of the questions surrounding this massive initiative. So, look for more stories regarding the Choice Neighborhood initiative from Folo Media in the coming months.