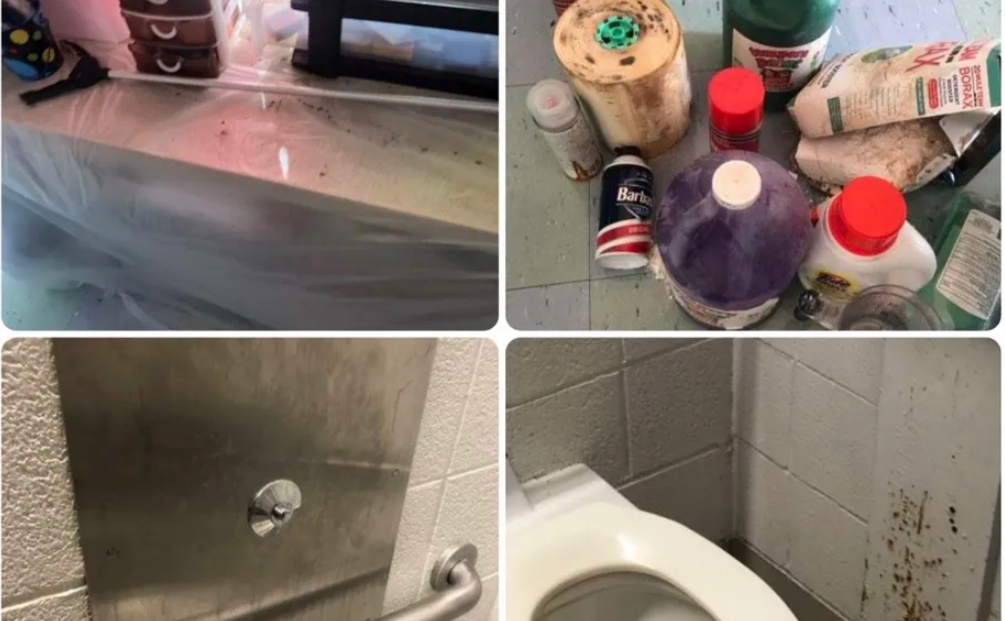 Since returning to 53 Philadelphia district schools last week, teachers have been cataloguing what they say are unsanitary conditions, despite promises from the district that buildings had been thoroughly cleaned and made safe.

The website #phled reopening tracker, started by members of the Caucus of Working Educators, urges teachers to post pictures and descriptions of conditions they find as they re-enter school buildings for the first time since the shutdown last March caused by the coronavirus pandemic.

In less than a week, the site has received more than 30 testimonials, most of them anonymous, sometimes with the school specified and sometimes not. At a time when emotions are high and anxiety is widespread as school buildings gradually reopen, it has become a place for teachers to bare their anxieties, highlight policies they consider misguided, and broadcast their deep distrust of district officials.

“We feel lied to and betrayed seeing the condition of our school,” read one anonymous post. “Went in today and furniture was not cleaned, mouse droppings are everywhere.” Said another: “Zero indications that our room was ever cleaned since last March. We’re waiting to find out if there’s a mold issue in the ventilation. In another room there was mold on the desk and chairs.”

Many of the testimonials have been widely circulated on social media, often with the hashtag #onlywhenitssafe. There is also an Instagram site called covid_leaks_sdp.

Other Philadelphia Federation of Teachers’ members, which include paraprofessionals, counselors, nurses, and secretaries, use the site to complain that they have been denied requested accommodations to continue to teach remotely due to health issues.

Or, they say, they are wary of returning to school buildings before being fully vaccinated, especially when there are few or no students in their classrooms, as is the case for some.

Max Rosen-Long, who manages the reopening tracker site, said it is not an official WE Caucus project. But it has been propelled by teachers who joined the group, which was formed in 2014 to prod the PFT into taking more of a proactive stance around social justice and progressive causes, similar to union movements in Chicago and Los Angeles. In 2016 and 2020 it challenged longtime President Jerry Jordan for leadership, last year getting more than a third of the vote.

“Members got together to start this. We were hearing stories,” said Rosen-Long, a Spanish teacher at Science Leadership Academy at Beeber. The reports he is getting are “concerning because it’s not just a matter of buildings not being clean, but how can we trust the school district with these other issues like ventilation if they can’t handle things like refilling soap and hand sanitizer dispensers.”

According to the district officials, 1,600 staff members have asked for accommodations, and all but 190, or 12%, were granted. The district estimated that about 9,000 staff members are either direct or indirect support personnel for the prekindergartners through second graders who are part of the district’s gradual reopening.

Fatim Byrd teaches Spanish to fifth through eighth graders at Mayfair Elementary School, but is considered “indirect” support for the younger students because he regularly supervises a second grade classroom for a half hour or so at a time when the regular teacher must attend meetings.

He is not doing that now, but still must show up at the school and conduct his remote middle school Spanish lessons from there. He is putting himself “at unnecessary risk” he believes, for no reason.

“There’s no in-person student I’m seeing right now,” he said. As a Black man with asthma, he said he is in a high-risk demographic for COVID-19.

“I want to know why is it so important for all these different personnel to come in, when most parents don’t want their kids to come back. We’re not filling classrooms at all, there are less than five kids per class,” he said.

About 30% of the 32,000 eligible students elected to participate in the hybrid model, according to the school district.

Byrd said he has received his first vaccine, and will feel more comfortable after receiving his second shot. After prodding from the district and the PFT, the city pushed teachers higher on the priority list for vaccinations and Children’s Hospital of Philadelphia opened clinics to vaccinate them. Most, who are due back in buildings and want their shots, should be fully vaccinated by early April, according to the city’s health commissioner Dr. Thomas Farley.

As part of the memorandum of agreement on safe reopening that the PFT signed with the district, there is a process for members to report breaches of the promised protocols, such as failure to keep hand sanitizer in stock, post safe occupancy numbers for all rooms, maintain proper social distancing between desks, and install plexiglas barriers in offices. Members report problems to their union building representatives, who keep checklists and follow up.

“Monitoring compliance will be an ongoing issue, and we’ve already quickly resolved a number of issues we received,” said PFT spokeswoman Hillary Linardopoulos in an email.

Kate Sannicks-Lerner, a veteran kindergarten teacher at Julia deBurgos Elementary School, has been a vocal opponent of the district’s policies and posted several pictures of unsanitary conditions at her school when she showed up for work last week. She also filmed a video in which she explains that she is seeking an accommodation because her husband is at high risk should he contract COVID-19.

“I can’t afford to be that one teacher who gets COVID, comes home, gives it to my husband, and it kills him,” she said. “Schools weren’t safe before COVID.”

Sannicks-Lerner said late last week that her accommodation request had been granted and she is now teaching remotely.

District officials did not respond to questions about the conditions reported on the site. But Superintendent William Hite has said repeatedly that he believes all schools are safe, acknowledging that there is always a risk but noting that studies have shown that schools are not a major source of viral spread.