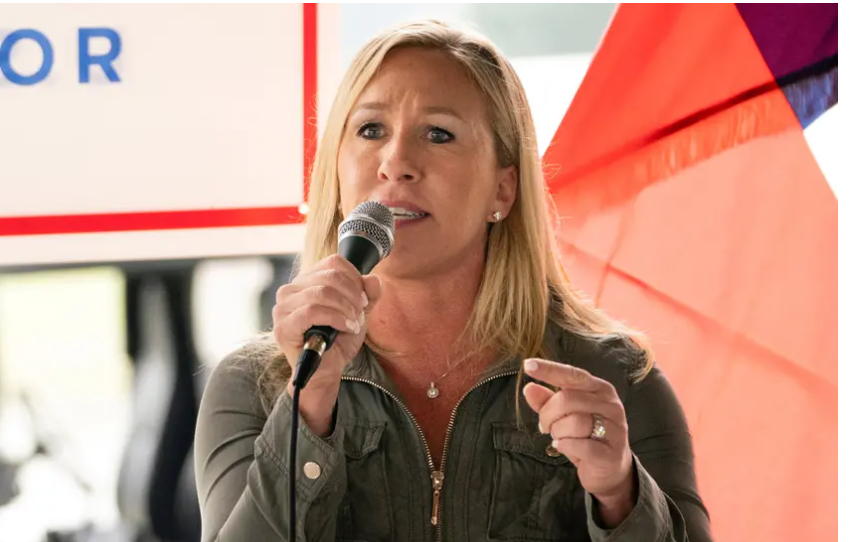 In a rare move, the U.S. House voted Thursday to strip a member, Republican U.S. Rep. Marjorie Taylor Greene of Georgia, of her committee assignments.

Greene has been under fire for expressing support for the QAnon conspiracy movement and for a history of racist, anti-Semitic and Islamophobic remarks.

The House’s action served as a de facto way to put Republican members on the record in a budding intraparty fight that pits more traditional Republicans who focus on issues like tax cuts and defense against followers of former President Donald Trump who spread false conspiracy theories.

The House voted 230-199 to remove Greene from the House Budget and Labor and Education committees. Eleven House Republicans joined with Democrats in the vote. Within the Texas delegation, it was a party-line vote. No Texas Republicans voted with the majority.

Greene is a freshman member who for years has made a series of incendiary public comments, including referring to Parkland school shooting survivor and gun control advocate David Hogg as “#littleHitler.” Greene also sowed doubts about the veracity of deadly American school shootings and agreed with a Facebook comment that the Parkland shooting — which left 17 people dead — was a “false flag.” On social media, she has supported posts that endorsed political violence against former President Barack Obama, U.S. House Speaker Nancy Pelosi and the FBI.

The Parkland remark served as the primary argument against Greene’s assignment to the House Labor and Education Committee.

“I do not take this vote lightly and, as the son of a Dallas public school teacher, voted with our dedicated North Texas teachers and the students they serve top of mind,” said U.S. Rep. Colin Allred, a Dallas Democrat. “A member of Congress who has propagated dangerous conspiracies about, and harassed survivors of, tragic school shootings is not fit to serve on the committee that oversees America’s public schools.”

Additionally, Greene has questioned whether a plane crashed into the Pentagon on Sept. 11, 2001.

A number of Texans who represented and worked in the state’s congressional delegation on Sept. 11, 2001, had close calls with the Pentagon crash. Most notably, then-Army Lt. Col. Brian Birdwell worked at the Pentagon that day. He barely survived the crash and suffered severe burns. He is now a state senator from Granbury.

The House’s vote Thursday came less than a month after former President Donald Trump espoused false information about the 2020 election he lost, comments that played a role in fueling his supporters’ deadly siege on the U.S. Capitol.

In the past, party leaders revoked committee assignments as a means of punishment. House Minority Leader Kevin McCarthy, R-California, declined to take such action in this instance, and Democrats opted to put the question to the entire U.S. House. Some Republicans are furious with McCarthy for forcing the issue on rank-and-file Republicans who were forced to go on the record Thursday afternoon.

Greene also commented in agreement with an offshoot of the QAnon theory on Facebook in 2018 that falsely accused former Secretary of State Hillary Clinton of murdering a child, as reported by Media Matters.

QAnon is a conspiracy movement whose adherents participated in the deadly Jan. 6 insurrection at the U.S. Capitol and whose believers have been accused of plotting or carrying out other violent crimes. In 2020, the FBI identified the movement as a domestic terrorism threat.

Greene took to the floor and defended herself in a speech, conceding that the Sept. 11 terrorist attacks and school shootings did in fact occur.

Most House Republicans did not argue over the authenticity of the allegations against Greene. Instead, the primary Republican arguments against Greene’s removal were procedural. Some of her GOP colleagues questioned the propriety of punishing a member in this manner for comments made before she served in Congress. Other Republicans were furious that an opposition party could influence the other side’s committee assignments. McCarthy called such action “a partisan power grab” in a Wednesday night statement.

And still, other Republicans tried to compare Greene’s history to remarks from Democrats. That included U.S. Rep. Ilhan Omar of Minnesota criticizing Israel and U.S. Rep. Maxine Waters of California encouraging people who see Trump administration officials in public to “create a crowd, and you push back on them, and you tell them they’re not welcome anymore, anywhere.” Neither of those Democrats advocated for the murder of elected officials or sowed doubts about American massacres.

In both parties, committee assignments are determined by the caucuses’ leadership and a group of leading members called the steering committees. There are few things more determinative toward an individual members’ power than committee assignments. The committees, divided by policy issues, are where members most directly influence legislation. They hold hearings and often serve as fundraising magnets.

From the top of its leadership, Democrats have already made clear they will brand the Republican Party with the QAnon conspiracy theory and in Greene’s image.

U.S. Rep. Louie Gohmert, a Tyler Republican, promised Republicans will strip Democrats of committee memberships when the GOP next controls the chamber.

“This is not a road to go down,” he said. “I beg you please, don’t start this precedent it won’t end well for either party, but we will follow your lead.”