Please ensure Javascript is enabled for purposes of website accessibility The first week in Detroit schools Optimism about enrollment, but complaints about safety - Mid Year Media Review
Skip to content 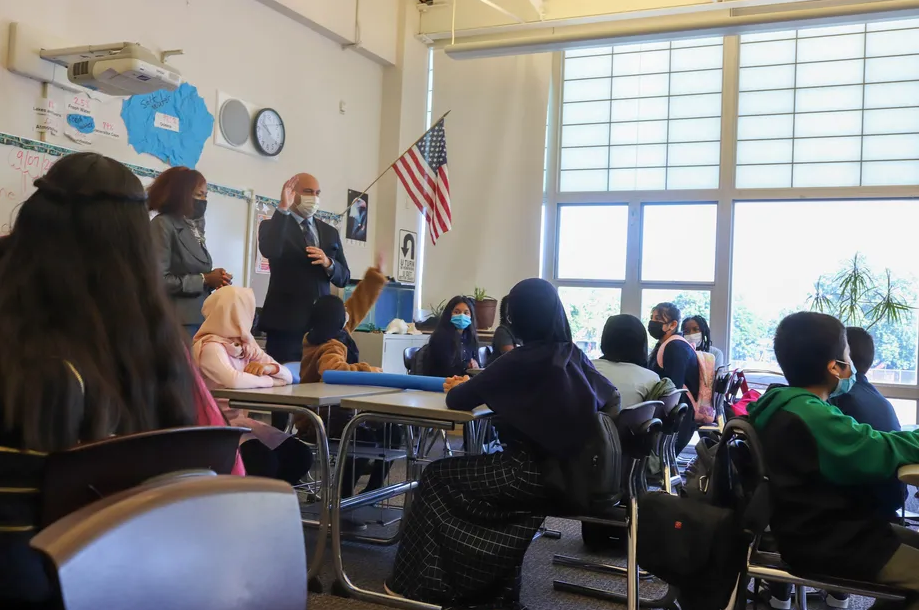 Enrollment in the Detroit Public Schools Community District is at 53,000 students, but only 43,500 have shown up for classes, Superintendent Nikolai Vitti said Tuesday. He’s actually encouraged by the numbers.

“I think we’re well positioned to meet where we were in the spring,” Vitti said during a school board meeting at Renaissance High School that was marked by complaints from many public speakers about classes with too many students, lack of social distancing, and other challenges during the first week of school.

The district will begin visiting homes of no-shows this week, hoping to repeat the success they had last school year when the visits helped increase enrollment after an initial drop in the student count.

But enrollment is just one challenge Detroit and districts across the country are confronting.  Districts are starting a new year by addressing the academic, social and emotional challenges presented by a year of pandemic learning. In Detroit, most students are learning in person this month after a year in which they were largely virtual.

Dozens of people spoke during the board meeting’s public comment session, most of them critical of how schools have operated during the first week.

“By no means was it perfect,” board President Angelique Peterson Mayberry said of the first week. “We’ve gotten the calls and the emails. Yes there were challenges and challenges were expected. We’re working to address those.”

N’shan Robinson, lead counselor at Mumford High School, told board members that too many of the classes at her school have too many students for social distancing to occur.

“Staff are calling in by the multitudes daily because they don’t feel safe,” Robinson said. “We don’t have subs, no security, and it seems there is no end in sight.”

She was followed by LaVar Johnson, a teacher at Renaissance High School, who raised similar concerns, saying that each academic department at the school is reporting that they have class sizes with more than 30 students. He said he’s also worried that during lunch, there are hundreds of students in the cafeteria not wearing masks  while eating.

“We are not doing this safely,” Johnson said.

Vitti, after the public comment period, addressed the concerns about class sizes.

“This conversation happens at the beginning of every school year and it’s especially heightened because of COVID,” Vitti said.

A letter of agreement with the Detroit Federation of Teachers establishes class size targets. When classes are near, at, or slightly over those targets, he said, “then we look at leveling.” That involves moving students from a class with too many students to a class that doesn’t have as many.

“The principals will start leveling now. Some already have,” Vitti said.

A couple of other speakers raised concerns about large class sizes in the district’s new virtual school, but Vitti said those classes would likely always be larger than in a traditional setting.

‘The worst week of my life’

The board heard from two students from the advocacy group Detroit Area Youth Uniting Michigan, who raised their own concerns about the safety of school buildings and pushed for remote learning.

Hafiza Khalique said the first week of school “was the worst week of my life.” She said desks were not being sanitized, social distancing was not being followed and “there were no cleaning materials for us to utilize and disinfect our spaces. There was no mandatory testing for students either.”

The district has implemented a robust testing program that is mandatory for staff and student athletes. But for all other students, parents must provide consent.

The district also has a hotline people can call to report unsafe conditions, and a committee that includes district and union representatives who visit schools to inspect how well the district’s safety protocols are being executed.

Air purifiers and fans are on the way

Some teachers and parents have taken to social media to complain that the district hasn’t provided enough fans and air purifiers for teachers who want them. The issue came up during the meeting when Lakia Wilson-Lumpkins, executive vice president of the Detroit Federation of Teachers, said too many of the union’s members were not aware the district offered  to provide the devices and too many “do not have what they need to be comfortable.”

The district, which has distributed 1,500 air purifiers and fans, emailed staff in March that they could request either, Vitti said.

“This was not an oversight of central office … it’s not an issue of logistics or planning. We just didn’t get responses,” he said.

Principals have been told to notify the central office by next week how many additional air purifiers or fans are needed. It will take about two weeks for the devices to arrive, Vitti said.

This article was originally posted on The first week in Detroit schools Optimism about enrollment, but complaints about safety