Please ensure Javascript is enabled for purposes of website accessibility These Memphis schools were the first to get a COVID scare last year. Their experiences warned of the challenges to come. - Mid Year Media Review
Skip to content 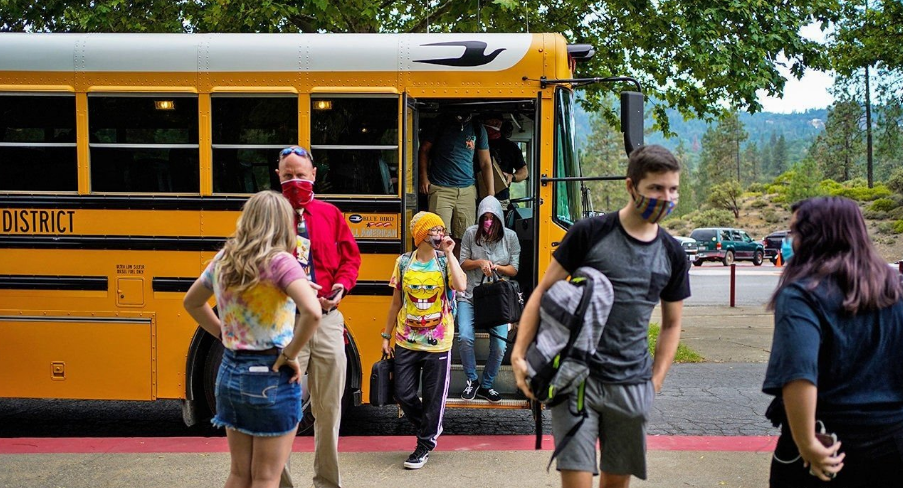 A year ago, the shared Treadwell elementary and middle school campus was the first in Memphis to feel the effects of what would become a world-shaking pandemic.

An employee at one of the schools went into quarantine after coming in contact with someone who tested positive for COVID-19 — one of only four cases reported in Tennessee at the time. A robocall to parents set off a mild panic, with a line of cars assembling to pick up students early.

Now, as most students in Shelby County Schools continue to learn remotely, the two schools can claim some of the highest in-person learning rates in the 88,000-student district. Hand sanitizer stations are set up in the hallways and students have assigned seats spaced out at lunch.

This is about as close to “normal” as school can get these days in Shelby County Schools — and it’s far from that. Only a third of the district’s students signed up to return to classrooms.

What happened at Treadwell was a preview of the challenges and successes to come in pandemic education, from spotty communication and shaken trust in school leaders’ ability to keep communities safe to moments of joy and connection.

On the day the quarantine was announced, Treadwell Middle School teacher Tasha Casey let students use her phone to call their parents. Looking back to the pandemic’s early days, Casey said she most treasured the moments when she and her colleagues posted video messages to students on social media. She always ended her segments with the words “We will be OK.”

“I was more concerned about the kids and how it was affecting them and adjusting,” said  Casey, who has been teaching in Memphis schools for 20 years. “Honestly, as a teacher, the most difficult thing was not being able to disseminate information the way I want to, not to see them, not to hug them.”

The Treadwell campus sits just north of Summer Avenue in Memphis, an international district with restaurants and shops representing countries from Colombia to Somalia to China.

Before the pandemic, the neighborhood was known for block parties where cultures mingled. Soccer and basketball games at the Treadwell campus were natural meeting spots where people who normally would stick to their own groups could get to know each other.

In the wake of Memphis classrooms closing last March, there was a “loss of neighborhood identity,” even as neighbors needed each other more than ever, said Jared Myers, who leads the Heights Community Development Corporation.

“Families were not being shared on information from the district on what to expect,” he said. “Everything happened so quickly.”

Treadwell parent Tameka Patterson learned of the quarantine not from a robocall but from TV. She was at home on the couch resting in the last days of her pregnancy when the initial reports aired.

The footage, which drew national attention, showed just how little the public knew about the virus at the time. One father sprayed his son with disinfectant before picking him up. A grandmother showed up with plastic bags wrapped around her clothing as protection.

Patterson headed to school to pick up her two daughters and son at the elementary and middle schools. By the end of the day, almost half of students at the middle school had left early.

“I was puzzled,” Patterson said. “But I was also, ‘I really don’t understand what’s going on but it sounds serious — let me go get my child.’”

While many large U.S. districts quickly pivoted to online learning, the Memphis district took a different approach, handing out paper lesson packets and televising instruction while the district worked on a plan to purchase laptops and tablets for virtual learning using federal relief money. Last spring, district officials only had enough laptops for half of their students.

By the start of the new school year in August, the district secured laptops, tablets, and Wi-Fi hotspots for students who needed them and provided some teacher training for online instruction.

When virtual learning started, Patterson reduced her work hours instead of returning fulltime to her job as a McDonald’s cashier after maternity leave so she could help her three older children adjust to online classes. With her youngest school-age child in pre-kindergarten, Patterson said she needed a lot of patience to help her daughter and learned about what teachers go through.

But communication with her children’s teachers was scarce. She felt the switch to virtual learning was too sudden and unorganized. It’s hard for her to see any upsides of continuing online learning. And since Shelby County Schools is keeping all instruction online the rest of this school year even if a student returns in person, Patterson said sending her children back to classrooms has felt like a waste of time.

“With her being inside the building, she still not getting that hands-on learning,” she said. “She’s doing the same learning she would be doing at home.”

Lack of updated contact information for parents and guardians in the district’s databases has been a challenge since the pandemic first disrupted education. By the fall, Shelby County Schools was searching for 3,000 students who hadn’t picked up a laptop or attended classes.

Casey, the longtime Memphis teacher, saw her relationship with parents and students change dramatically during remote learning. Before, she prided herself on working out issues with students one-on-one in class and helping them take responsibility for their actions. She only called parents as a last resort when a student was missing work or misbehaving.

During the pandemic, parents began emailing her more frequently — sometimes to her delight and sometimes excessively. Parents have more access to what their children are doing in virtual classes and often rush to intervene, Casey said. She’s still getting used to it.

“Some of them wear the email out,” she said of parents.

At afternoon pickup at Treadwell last week, eighth grader Romeo Vasquez said he felt there are “a lot of people protecting us from the virus” at the school.

That wasn’t always the case. When the Treadwell employee was quarantined last March, all six janitors at the schools quit, eliminating the first line of defense for hygiene supplies and cleaning. That left one manager from the district’s contractor to fill the enormous gap at a critical time, said school board member Althea Greene.

The situation and ensuing complaints caused district leaders to re-evaluate their cleaning routines. During the announcement about reopening buildings a month ago, a top official announced that custodial staff at all schools would be required to restock soap and paper towels daily instead of waiting until the dispensers were empty.

Though minor, staff across the district noted the change as a sign their complaints might finally be addressed.

Since reopening classrooms, school leaders have noticed more students submitting assignments and returning students being more engaged than they were online. Even students who sporadically attended online classes came back to the classroom focused and ready to learn, Casey said.

Ray said recently that some version of online learning will continue even after the pandemic. He hasn’t released details, but said he’s thinking about how to apply lessons learned during virtual learning to prepare students for life after high school.

“People tend to think in our community that once we get back to ‘normal times’ — whatever that is — the devices, they’re going to go away,” Ray told board members during a planning meeting last month. “Absolutely not. We made a major investment.”

Treadwell sixth grader Leonardo Vasquez, Romeo’s brother, said he is learning more in person even though teachers are still instructing over videoconferencing. The lessons are more interactive and he can get instant help from a teacher if he needs it, he said. Before classrooms reopened, he said he felt “basically trapped up in your own room.”

Now, he feels like he’s experiencing all the “firsts” of middle school in a way he couldn’t online.

“When there’s school, you can meet more people,” Leonardo said. “You can talk to them to see if you can become friends.”

This article was originally posted on These Memphis schools were the first to get a COVID scare last year. Their experiences warned of the challenges to come.